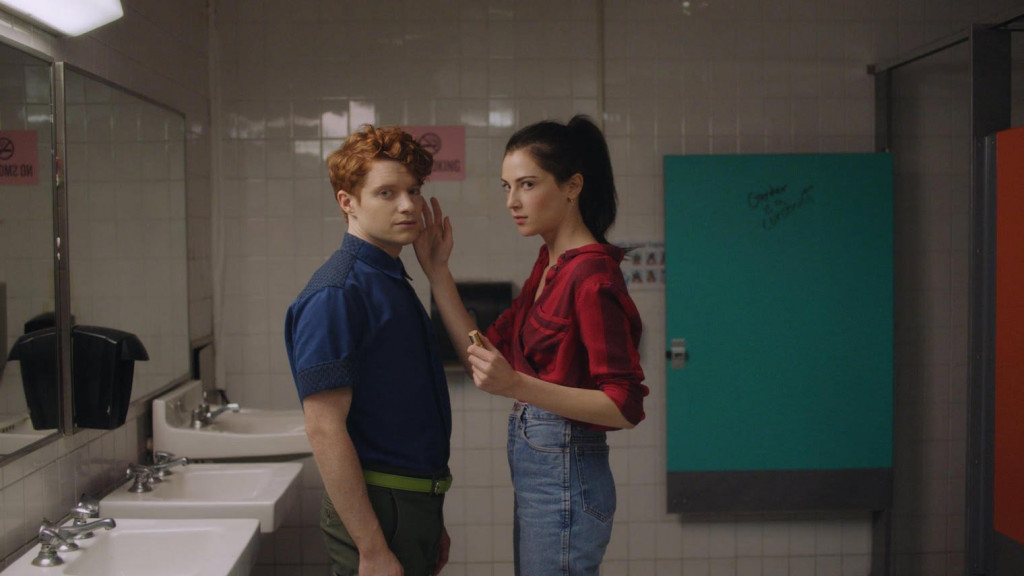 Dark or black comedies may not be everyone’s cup of tea. But they sure are one of the most advanced form of art. While creating humor out of serious situations, such as crime, crisis, or even death, they attempt to lighten the situation and generate a good dose of laughter (which might sometimes come accompanied with a bit of nervousness on your part).

Netflix has a vast collection of comedy shows and ‘Bonding’ happens to be among the best of them. It is a show based on the real life experiences of Rightor Doyle, its writer, director, and showrunner. Anonymous Content & Blackpills are producers of the show and Dara Gordon, Jacob Perlin, Nina Soriano, Tom Schembri, and David Sigurani are executive producers.

Bonding Cast: Who is in it?

‘Bonding’ stars Brendan Scannell, Zoe Levin, D’Arcy Carden, and Micah Stock in the leading roles. While actor and writer Scannell is best-known for his roles in ‘Heathers’ and ‘Where You Are’, Tony Award-nominated American stage, film and television actor Stock has appeared in ‘Brittany Runs a Marathon’ and the ‘Escape at Dannemora’. Levin’s notable works include ‘Palo Alto’, ‘Beneath the Harvest Sky’, and ‘Red Band Society’. Carden is mainly known for her role as Janet in ‘The Good Place’.

Bonding Plot: What is it about?

The plot of ‘Bonding’ is loosely adapted from the real-life experiences of its creator Rightor Doyle.  The story is centered around two long-lost BFFs who meet unexpectedly in New York. Pete and Tiff are high-school friends and the former (an upcoming stand-up comedian) is employed as her assistant. He is also gay and has recently come out as such in front of society. Now, after he meets Tiff, he discovers that Tiff (a grad student) is, in fact, one of the top dominatrices in the city. And now, Pete gets roped into her secret world of sexual domination and BDSM. The rest of the series chronicles the events in the lives of both the protagonists as they gear up to face the various challenges thrown at them in this path of nudity, sex, self-acceptance, and lust.

‘Bonding’ inherently is a reunion story of two best friends. But this is not the conventional coming-back-together tale. When the series starts, you don’t even come to know who these guys are or how they are, at first glance. But as the plot progress and glimpses of the past are shown via flashbacks, you get to know more about these characters and what they were years ago. The short format uses surrealistic imagery to reflect on the transformation of the protagonists as the story unfolds.

For example, the first few episodes depict the scenes from Tiff’s profession in a more surreal style. But when Pete begins to know and understand her work, the scenes become more realistic, thereby, removing the stigma surrounding the prominent theme of the show.  Yes, ‘Bonding’ does a brilliant job in shedding light on someone working as a dominatrix. It presents Tiff as a strong character who firmly believes in what she does. She, in fact, stands up for one of the women, Kate, when the latter is forced upon by her professor. This is yet another plus point for the series. It highlights another issue — the proper treatment of women.

To conclude, ‘Bonding’ lends an intriguing, witty, and humor-filled glimpse into the inside world of a dominatrix. The chemistry between the leading pair is so perfect that you almost start praying they stay together, forever, as friends. In fact, here is this other scene that stayed with me for a long time after I watched the series. A flashback shows Tiff and Pete running in the woods after prom night when they decide to split ways. The same scene again shows them running, but this time, they vow to stick to each other through thick and thin. Indeed, with such a thoughtful script, wonderful narration, apt elements of humor, and memorable characterizations, this show gives an emotional insight into the building of both romantic as well as platonic relationships.

Bonding Season 2 Release Date: When will it premiere?

All the eight episodes of ‘Bonding’ season 1 premiered on Netflix on April 24, 2019. As far as the next season goes, we don’t have an official announcement yet. Though considering how unique the show is, we are hoping that it does get another season. Our best guess is that if the show does get renewed, ‘Bonding’ season 2 can release sometime in April, 2020. We will update this section as soon as we hear more.

While we wait for an update on season 2, check out the season 1 trailer to refresh your memories. Head over to Netflix to catch all the episodes of the first season.