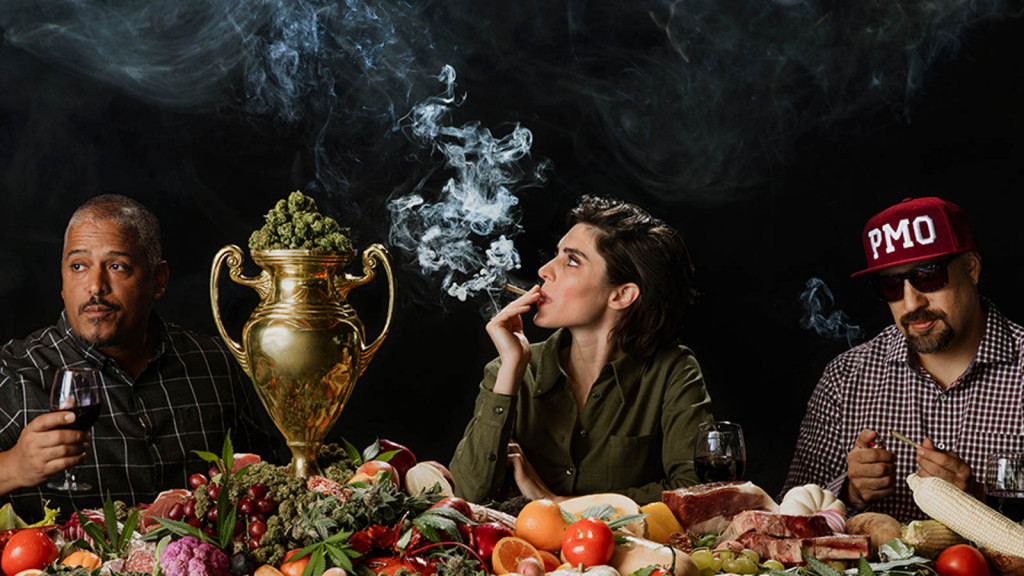 Marijuana-infused food has been around for quite some time but was never a part of cuisines found in restaurants or eateries. Thus, the general public never knew about the varieties of food that can be infused with marijuana. After the product was legalized in many American states, high-end chefs started experimenting with it. This resulted in them preparing several delicacies infused with marijuana. And to give us a better picture of what can be possible with this new addition to food, Viceland brought along the series called ‘Bong Appetit’. The show first premiered on December 14, 2016.

Abdullah Saeed is the creator and presenter of the first two seasons of ‘Bong Appetit’. The past seasons saw chefs making normal dishes with the addition of cannabis, which, except the high, also gives the dishes a new flavor. For instance, in the first season, we see the chefs making dishes like beef cheek with cannabutter, weed-smoked tuna. For the fans who have always enjoyed such experiments with their favorite food and favorite herb to smoke, Bong Appetit is a must-see.

Bong Appetit Cast: Who is in it?

The former host Abdullah Saaed had earlier announced that he was quitting Vice and will no longer be producing content for them. The announcement was made after a report surfaced where people had alleged that Vice was not a safe place to work as there are numerous reports of sexual harassment at their offices. However, B-Real and Miguel Trinidad took over and they ‘light up’ the show in their own way.

B-Real himself is a cannabis entrepreneur and the frontman of the popular hip-hop group Cypress Hill, while Trinidad is a restaurant owner. Regarding his joining the show, B-Real says that he has been involved with the cannabis industry for so long that it has clearly made him an authority on the subject and that is what Vice wished to tap in when they approached him first. He also said that he had a lot of fun working with Miguel Trinidad and Vanessa Lavorato. He had first expected the shooting to be a grind as it normally is with TV, but the hosts got along so well that they had a great time shooting the entire season.

Along with the two hosts, many celebrities also drop in, with the likes of Wiz Khalifa, Lykke Li, George Clinton, and D.R.A.M joining the hosts as guests. The hugely popular comedy duo Cheech and Chong along with Doug Benson also appear on the show. Regarding their objective behind the show, Miguel said that it was to make cannabis-infused dishes which weren’t too strong and also to destigmatize the negative aspects associated with the product. He was also super-excited to be working with B-Real, saying, “If you have smoked weed and haven’t listened to Cypress Hill, then you have not really smoked weed”.

Bong Appetit Plot: What is it about?

The third season of show was modified into a cooking competition, and there were no longer be any experiments and fun. Things got a little serious this time. The third season was re-christened as ‘Bong Apetit: Cook Off’.

A roster of chefs cook their best dishes with cannabis on the show, and like all other competitive shows, there is a winner declared among three contestants after each episode. The most interesting thing about this show is surely its unique concept, where the food served has hardly been tasted by any viewer. If interested, audiences can learn how to make tea using cannabis, and also how to add weed not only to brownies or other sweets but make full meals out of them. All chefs will be given a certain period of time within which they will have to complete their dishes.

Regarding the competition, the judges said that there sure was a competitive spirit, but it was all done in a very fun way. Nobody was being secretive about their recipes and the cooks even interacted amongst themselves while preparing the dishes. In the last episode, the three judges decide who were the three best chefs in all of the episodes aired before, and these three chefs square off against each other for one last time. The winner is granted the status of the best chef in all of ‘Bong Apetit: Cook Off’.

Bong Appetit Season 3 premiered on April 3, 2019, on Viceland. As far as the next season goes, we don’t have an official announcement yet. Though considering the uniqueness of the show, we would be surprised if it doesn’t get another season. Our best guess is that if the show does get renewed,Bong Appetit Season 4 can release sometime in April, 2020. We will update this section as soon as we hear more.

In the trailer below, you can see how meticulously the chefs are busy making their dishes infused with cannabis. Each food item has a precise amount of cannabis mixed in it so as to not suppress the other flavors. The hosts are puffing away on joints while the contestants are busy cooking.