Will There be a ‘Brahms: The Boy III’?

Evil-doll driven horror franchises like ‘Annabelle‘ and ‘Chucky’ have dominated the genre for decades. For good reasons too. After all, there is nothing as quietly eerie as a tiny inanimate humanoid object with a glassy stare and an angelic smile plastered on its face. And even after decades of using this tried and tested trope, it doesn’t lose its horror element, which explains why it remains the genre’s favourite plaything.

As a genre, horror often explores themes relating to the loss of innocence. Not only does this say something about our own-deep rooted fears, but it also goes on to explain the long-running obsession the genre has with creepy dolls and kids. Lucky (or rather unlucky) for us, William Brent Bell’s ‘Brahms: The Boy II‘ has them both.

The film is a sequel to Bell’s 2016 ‘The Boy’ that took us to Heelshire mansion for the first time and introduced us to Brahms. While the film wasn’t particularly great, it did prove to be a worthy addition to the subgenre with the unusual twist it offered. This year, we get to revisit Brahms, the eerily human-like porcelain doll, as he makes a new friend. The sequel centers around a young family who moves into the Heelshire estate following a traumatic event, and their son, Jude, soon befriends Brahms.

Horror is largely franchise-dominated in today’s day and age. And evil-doll tropes still prove to be successful despite their predictability. This explains how ‘The Boy’ got itself a sequel so soon despite its average performance. With the premiere of ‘Brahms: The Boy II’, this February, it is only natural to wonder if the boy will return to haunt us yet again. Could there be more follow-ups in store for us? Here’s everything we know.

Will There be a ‘Brahms: The Boy III’? 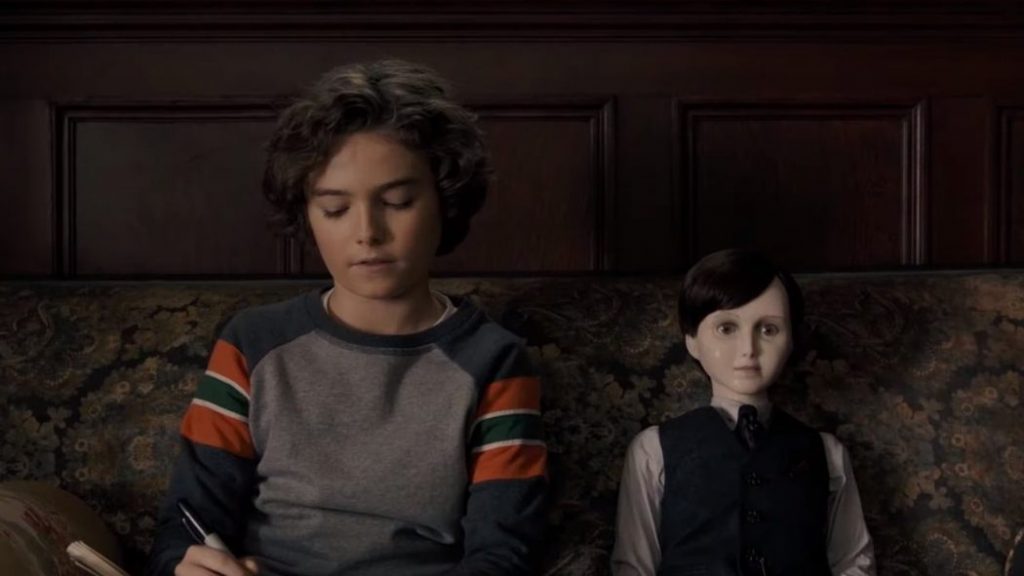 Bell collaborated with screenwriter Stacey Menear to bring to ‘The Boy’ that followed the story of Greta, a nanny left alone to take care of a life-sized doll, Brahms, named after a child who passed away in a fire years ago. As she spends time alone with the doll, inexplicable events begin to occur, leading her to believe that the doll is alive.

However, the ending reveals that the doll isn’t possessed. Instead, the real Brahms, who we learn is a sociopath, survived the fire, and lived behind the walls of the mansion. Greta manages to escape as Brahms attacks her. The last scene reveals Brahms mending the doll, which sets it up the sequel.

The ending of ‘The Boy’ is the strongest redeeming quality in an otherwise average film. Owing to its low-budget, the film managed to be a moderate success at the box-office. It grossed up to $64.1 million, against its $10 million budget. However, the film was panned by critics, despite several of them appreciating the twist ending. It has a measly score of 30% on Rotten Tomatoes and was derided for its extensive use of cheap jump scares.

This year, Bell and Menear collaborate once again with ‘Brahms: The Boy II’. Unfortunately for us, it misses the mark by a mile. The sequel, once again, heavily relies on jump scares, but lack anything solid. The early responses to the film have largely been negative, even from those who appreciated Bell’s previous effort. The sequel has even been labelled unnecessary by many. Even a solid performance from Katie Holmes can’t help it from sinking. However, ‘The Boy II’, in many ways, does serve as an origin tale for Brahms.

Whether or not we will get a third part of ‘The Boy’ largely depends on the sequel’s box-office collection. Given its low-budget of $10 million, it should ideally collect as much as the original. However, the early responses to the film, make this seem unlikely. But we never really know about horror-franchises these days. There is a possibility that we might just get ourselves a Brahmsverse. Whether or not we want one though, is another question altogether. Given the gap between the original and the sequel, if we were to ever get a third part to ‘The Boy’ we could expect it to premiere around 2024.

Read More: Where Was Brahms the Boy Filmed?