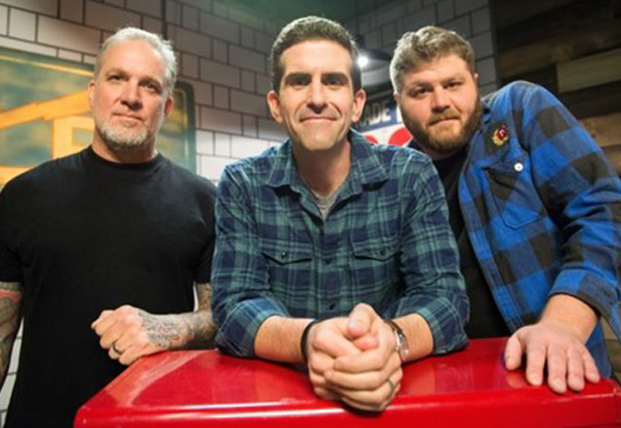 When it comes to shows about automobiles, Discovery has seen an upswing in the past ten years to gradually become a mainstay favourite hub for gearheads in general — ‘Fast N’ Loud’, ‘Street Outlaws’, and the Misfit Garage saga was only the beginning for a spectacular decade with several pledges of ‘mega-motor months’ (which eventually did start happening since 2016). Sadly though, the last couple of years have also marked the end of some of the more well-known franchises in the genre – examples include ‘Fifth Gear’, which wrapped itself up in 2018, and Overhaulin’, which has not come back on air since 2015. Fortunately though, execs and showrunners have finally turned their attention to more action-oriented showdowns rather than car-flipping and standard automobile reality TV.

‘Break Room’ falls in line after shows with vehicular combats – or disasters involving automobile – or god forbid, even both. However, the show is not your standard battle-bot arena. Far from it, in fact. It is more of a chilled-out version of an FBE reaction clip with more set rules, a higher production budget, and the usual TV shenanigans. Simply put, the show calls upon a number of experts and motor enthusiasts to look at viral videos of car mishaps – or something of the like – and react to it. This is one of those premises that sounds bland and weak until you see it in action. ‘Break Room’ is genuinely a good show that embraces its goofy nature and has turned out far better than the average Discovery gearhead-catering schtick.

Brake Room Cast: Who’s in it?

A large part of what makes Brake Room appealing is its star-studded cast: as a modern-day reality TV speciality would have it, Brake Room’s entire cast consists of celebrities and TV personalities. A regular to the show, Jeff Allen, is a producer-actor and a third-generation car guy, a Cross Country Rally Driver, and a licensed SCCA Race Car Driver. We also have Matt D’Andria, the American actor and producer known for his work in ‘The Car Show’ (2011), ‘Winning: The Racing Life of Paul Newman’ (2015), and ‘The Cars That Made America’ (2017). Further on the list are James Pumphrey, Ricky Carmichael, Josh Owens, Wee Man, and Jessi Combs.

Monday Night Mania-starrer and reputed ESPN caster Nick Steven serves as the host of the series, and he fits in so well with the rest of the cast that it would be an educated guess to expect him to be the host in future seasons. Apart from the above members, the show also features several other TV personalities like, Ryan Blaney, Captain Sean Dwyer, The Humble Mechanic, Adam Anderson, R.J. Anderson, and Erik Jones, who are well-versed with cars and motors.

Brake Room Plot: What is it about?

The show, hosted by Nick Stevens, features its cast of celeb experts. In every episode, they are faced with a series of viral videos, footages, and/or hypothetical situations, wherein they anticipate, discuss, and provide their insights regarding the topic at hand. This sounds like a casual discussion forum such as the FBE reaction videos on Youtube of late, but it is presented as a game show. Each episode, at its premise, pits two car fanatics against each other, where they will have to rely on their expertise and knowledge over automobiles to answer questions about blunders, mishaps, or viral clips of auto accidents. The weekly winner will be taking home ‘the alluring mystery box’, as the network calls it.

The show debuted with the contestants Jesse James, a reality star and James Pumphrey, an automotive writer, who are seen competing against each other to win the mystery box. Season one continues on with different episodes, each episode featuring two different celebrities like, the reality star Tim Smith and Ricky Carmichael, Josh Owens and James Pumphrey, Wee Man and Jeff Allen, the gearheads Jesse James and Jessi Combs, Ryan Blaney and Matt D’Andria, the TV personality Captain Sean Dwyer (Deadliest Catch) and actor Wee Man.

These duos are all here for testing their motor knowledge, and at the end of the show, the winner will own the mystery box. The series is ideal for car lovers, and as their favourite celebrities will be participating in the show, it will be pretty exciting to know who is going to win and what is going to be there in the tempting ‘mystery box’.

Brake Room Season 2 Release Date: When will it premiere?

‘Brake Room’ Season 1 premiered on October 1, 2018. Season 1 consisted of 12 episodes and had two episodes released each day. Each episode is titled with the contestants’ names, who compete against each other in that respective episode. The first season aired till November 5, 2018. As far as the next season goes, we don’t have an official announcement yet. Though considering the popularity and uniqueness of the show, we would be surprised if it doesn’t get another season. Our best guess is that if the show does get renewed, ‘Brake Room’ Season 2 can release sometime in October 2019. We will update this section as soon as we hear more.

The show has unfortunately not been renewed yet, and so there are no trailers or teasers for ‘Brake Room’ Season 2 yet. While waiting for further news regarding the future of the show, you can watch all the episodes of the previous season here.