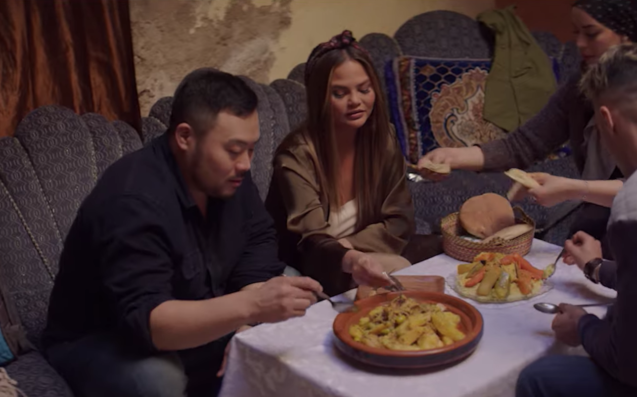 ‘Breakfast, Lunch & Dinner’ is a food docu-series that airs on Netflix. The documentary combines three of our favorite ingredients — travel, delicious dishes, and celebrities. It takes us to four different cities in across the world, where the host David Chang is accompanied by a famous personality on each trip. And in each location, the duo indulges in three meals — breakfast, lunch, and dinner.

The first season of the show was well received. But will there be a Breakfast, Lunch and Dinner season 2? Here’s everything we know about it.

Who’s the Host of Breakfast, Lunch and Dinner?

‘Breakfast, Lunch & Dinner’ is hosted by David Chang, a restaurateur, author, and tv personality who founded the Momofuku restaurant group. He is also the creator, producer, and star of the Netflix original, ‘Ugly Delicious‘ — a show that has a 100% approval rating on Rotten Tomatoes.

Throughout the episodes, Chang is accompanied by celebrity stars. In season 1, following celebrities made an appearance: actor and filmmaker Seth Rogen; cookbook author Chrissy Teigen; actor and comedian Kate McKinnon; and actor and writer Lena Waithe.

If the show is renewed, you can expect the host, David Chang, to be back with different set of celebrities.

What is the Breakfast, Lunch & Dinner About?

‘Breakfast, Lunch & Dinner’ or BLD in short, brings in an appetizing mix of food, travel, and culture, and adds an extra dose of flavor by introducing celebs in the mix. In this travel show, David Chang journeys across the world and visits four locations.

In season 1, He visits Vancouver, Canada, with Seth Rogen; Marrakesh, Morocco, with Chrissy Teigen; Phnom Penh, Cambodia, with Kate McKinnon; and Los Angeles, California, with Lena Waithe. Together, the pairs engage in multiple adventures while indulging in delicious local cuisines. Across the episodes, we witness them enjoying dim sum in Vancouver, participating in pottery-making in Marrakesh, sitting down with monks in Phnom Penh, and relaxing in a pedicure session in Los Angeles.

In Vancouver, we learn how its multi-cultural heritage results in the most amazing of mouthwatering dishes. Seth expresses how he is fascinated with places that have a rich, complex history. In Cambodia, Kate explains why she likes countries where there’s no “cohesive American conception”. In LA, Lena confesses her love to try new things and her endless obsession with culture and craft. The series explains how the good part of travel maybe food but its best part is the conversations when we meet new people and know about their different views of life. It showcases how everything has a story behind it and over the course of years, how these fables have evolved to transform into amazing, distinct tales.

In BLD, what keeps viewers vested is its endless conversations and Chang’s ability to venture into his guests’ most guarded territories. In one episode, after a sumptuous dinner in Los Angeles, Chang engages in a moving discussion with Lena Waithe, where the latter speaks about the Middle Passage, Trayvon Martin, the versatility of the blacks, and their capacity to transform heartbreaking tragedies into amazing artforms. In another episode, Chang indulges in a fulfilling lunch with Kate McKinnon in a bustling food market in Phnom Peh. This is when Kate confides that she does not have much confidence in her writing skills. The conversation then shifts toward the pursuit of happiness.

Chang, with his compassionate, empathetic nature, focuses on the outward surroundings as well as the inward emotions of the self. He lures people with his love for food, treats them to amazing dishes, divulges his own insecurities, and listens attentively when the other speaks his/her heart out. In a certain scene, we witness Seth Rogen’s explanation of why one of his movies flopped and how he coped up with it.

Then there is also the cultural aspect that the show explores. After breakfast, lunch, and dinner, we witness many discussions about art, fame, weed, marriage, and diversity in food, customs, and traditions of a particular region. Season 1 ends in Cambodia where we learn about Asian cuisines — with Chang shedding light on the country’s different food habits, restaurants, and cities. Showcasing diverse perspectives of food and travel, BLD introduces the much-needed diversity in television. It explores how one can develop bonds through regional cuisines and how the curiosity to learn, eat, and travel can build lasting memories.

Breakfast, Lunch & Dinner Season 2 Release Date: When will it premiere?

‘Breakfast, Lunch & Dinner’ season 1 premiered on October 23, 2019, on Netflix. Its entire run for the first season consisted of four episodes.

As far as the next season goes, we don’t have an official announcement yet. Though considering the uniqueness of the show, we would be surprised if it doesn’t get another season. Our best guess is that if the show does get renewed, ‘Breakfast, Lunch & Dinner’ season 2 can release sometime in October 2020. We will update this section as soon as we hear more.

You can check out the official trailer for ‘Breakfast, Lunch & Dinner’ season 1 below: