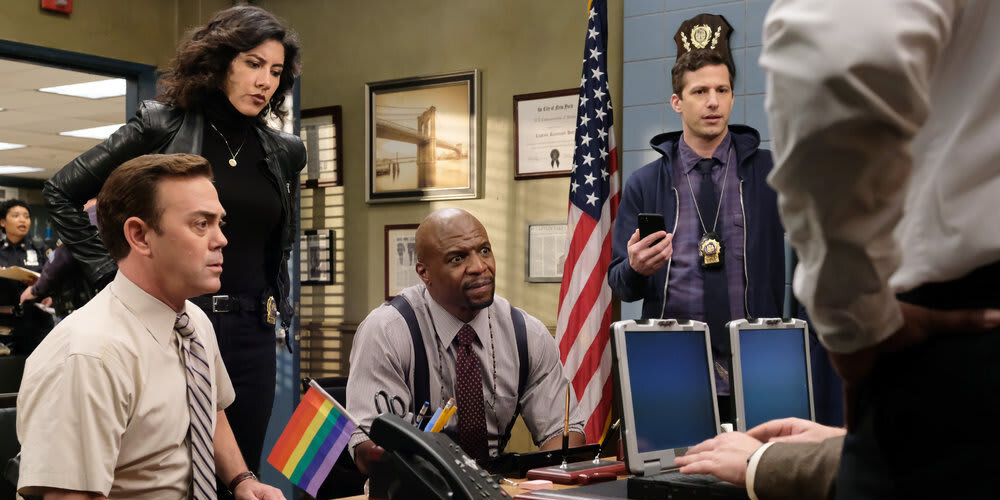 ‘Brooklyn Nine-Nine’ is easily one of the first names that come to mind when one thinks of a cop-comedy show. The fictional 99th precinct of NYPD has the strangest and most hilarious of people, and it is hard to pick a favorite. But a large chunk of the comedy comes from the equation between detective Jake Peralta and Captain Raymond Holt. They could not be more poles apart, but one thing they have in common is, they both love a good challenge. The show has notably been praised for its portrayal of the LGBTQ+ community and its inclusion of heavy subjects without losing the comedic punch.

Created by Dan Goor and Michael Schur, the hilarious crime series initially released on September 17, 2013, on Fox. However, the series was canceled after airing five seasons. Fortunately, NBC swooped in and gave the show a new home. The critically acclaimed comedy has also bagged several prestigious awards, including the Golden Globe Awards, Critics’ Choice Television Awards, and Primetime Emmy Awards. As the eighth season comes to a close, fans can’t wait to learn what is next. Will there be a season 9? Well, you will want to know what we have to share.

As for the show’s ninth season, here is what you need to know. In November 2019, the comedy show bagged an early renewal for its eighth season. The announcement came three months before season 7 even debuted. However, in February 2021, NBC announced that season 8 would also be the show’s final run. “I’m so thankful to NBC and Universal Television for allowing us to give these characters and our fans the ending they deserve,” said series creator Dan Goor in a statement.

Goor continued, “When Mike Schur and I first pitched the pilot episode to Andy [Samberg], he said, ‘I’m in, but I think the only way to tell this story is over exactly 153 episodes,’ which was crazy because that was exactly the number Mike and I had envisioned.” The series is finally coming to an end with the same number of episodes. So, it is a relief to know that the story of the characters is not coming to an abrupt end. Despite the hardships the series has faced in the past (as it was canceled by Fox), it has managed to stick to the plan.

“Ending the show was a difficult decision, but ultimately, we felt it was the best way to honor the characters, the story, and our viewers. I know some people will be disappointed it’s ending so soon, but honestly, I’m grateful it lasted this long,” said Goor. The show has a dedicated and vocal fanbase. In fact, it was because of the massive public outcry that the series was given a second lease of life by NBC after Fox pulled the plug on it in May 2018. However, we do not see that happening again since the creators have made it crystal clear that they are done telling the story they wanted to tell. With that being said, it is unlikely that ‘Brooklyn Nine-Nine’ season 9 will ever get made.

It has been one of the greatest joys and honor of my life to play Amy. I am so grateful to be able to take a victory lap with our beloved cast and crew. To our amazing fans, we love you. No tears for now, we still have a whole season to shoot! 🚨❤️ https://t.co/WsbCyhr5WC

As much as the show and the characters mean to fans, it has also been a big part of life for the cast and crew that dedicated years to the crime comedy. Melissa Fumero, who plays Amy Santiago, expressed her gratitude. Her Twitter post reads, “It has been one of the greatest joys and honor of my life to play Amy. I am so grateful to be able to take a victory lap with our beloved cast and crew. To our amazing fans, we love you.” The fans were all praise for Terry Crews’ character on the show, Terry Jeffords. In response, the actor wrote, “I’m sad it will end, but happy to have had the chance to be a part of something so special.” But all good things come to an end and that is also the case with this epic series.