Brooklyn Nine-Nine S07 E10: All the Details You Need to Know 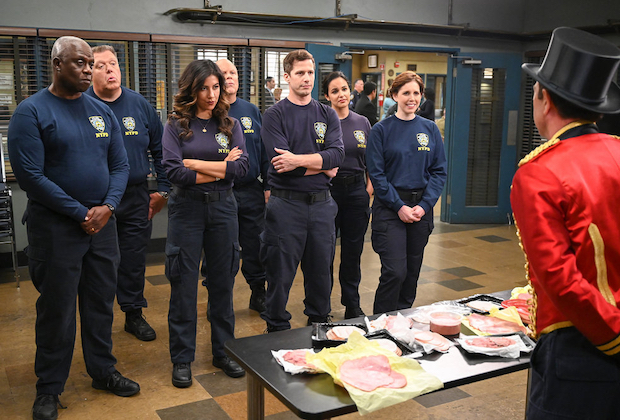 Brooklyn Nine-Nine season 7 episode 9 tells yet another remarkable story while giving enough screen-time to all of its lead cast. But this time, we also have a new arrival, Dillman, who leads a case to be investigated by Holt. We will come to whatever ensued in the episode in our brief recap later.

Now, with episode 9 out of the way, fans are curious to know the details of the next episode. Read on to know everything about ‘Brooklyn Nine-Nine’ season 7 episode 10.

Brooklyn Nine-Nine Season 7 Episode 10 Release Date: When Does it Premiere?

Its official synopsis goes as follows: “Jake and his father deal with an unsettled family business; Amy and Rosa work a high-profile case; Terry wants to join the NYPD band.”

You can catch episode 10 of ‘Brooklyn Nine-Nine’ season 7 by tuning in to NBC at the timeslot mentioned above with the help of an active cable subscription. Moreover, you can also watch the season online, if you have a valid cable provider’s login, on NBC’s official website.

Episode 9 of Season 7 of Brooklyn Nine-Nine is completely a whodunnit scenario. What happens is, a glitter bomb explodes at the precinct. Before this happened, Holt is seen putting together a special task force. Of course, Jake wants in because it’s his nature to volunteer for anything that sounds cool and out of the ordinary. But when the bomb blows off right on Jake’s desk and onto Scully’s face, things take a different turn.

We naturally assume that this was an elaborate prank. But Jake being the go-to prank master and him having not done it, who is the culprit? Everyone starts pointing fingers at each other and to put an end to the chaos, Holt seeks the help of an outsider — Frank Dillman of the San Francisco Police Department.

Jake attempts to give fierce competition to Dillman as he wants to prove that he deserves to be in the task force. But since Dillman possesses immense knowhow about glitters, it is difficult to outsmart him. Eventually, Jake ends up asking Holt of his whereabouts during the lunch hour. Holt says that he was with Boyle, a claim everyone finds hard to believe.

On the other hand, Dillman announces that it was Jake who was behind the prank. But again, Jake presents proof, which suggests that Dillman was the man who had orchestrated the whole stunt. Well, finally, the culprit is revealed via Boyle. He wanted to destroy evidence that would need him to appear in court. And the culprit was the assistant district attorney!