Brooklyn Nine-Nine S07 E08: All the Details You Need to Know 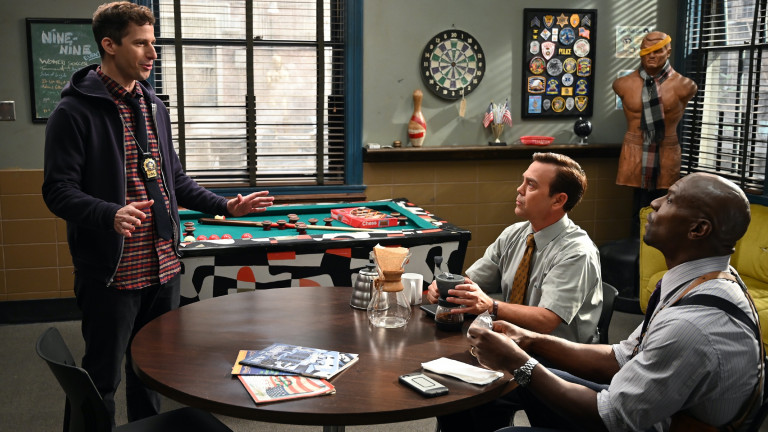 After a perfect, multi-plot laden episode last week, Brooklyn Nine-Nine dropped another brilliant episode this week, which plays with the show’s rich, six-season history. It manages to give enough screen-time to each of its characters and also delivers some surprise developments.  We will come to its detailed recap later.

Now, with episode 7 out of the way, fans are curious to know the details of the next episode. Read on to know everything about ‘Brooklyn Nine-Nine’ season 7 episode 8.

Brooklyn Nine-Nine Season 7 Episode 8 Release Date: When Does it Premiere?

Its official synopsis goes as follows: “Doug Judy is back, and this time, things between him and Jake are personal; Amy and Charles try to find the perfect new vending machine for the Nine-Nine.”

You can catch episode 8 of ‘Brooklyn Nine-Nine’ season 7 by tuning in to NBC at the timeslot mentioned above with the help of an active cable subscription. Moreover, you can also watch the season online, if you have a valid cable provider’s login, on NBC’s official website.

This Thursday in Brooklyn Nine-Nine, the episode opens on a tragic note — Terry informs everyone in the briefing room that acting commissioner Madeline Wuntch is dead and the reasons for her death are yet to be disclosed. Holt is sure that the news is fake and that his nemesis had faked her own death.

He goes on to say: “If she was dead, we would be hearing the sounds of children singing in the streets!” However, when he sees her body inside the coffin, he realizes that the information is true. He comes back, singing, “Ding dong! The Wuntch is dead!” Holt also tells Amy and Rosa that with Wuntch gone from the scene, he can take back his rightful position as the captain of the Nine-Nine.

But it seems Wuntch is taunting Holt even from her grave. Before she died, she informed everyone that everything was fine between her and Holt and that the latter had volunteered to host and organize her NYPD memorial service. She knew that when Holt starts cursing her before the officials during the eulogy, his career would be at stake.

She even sends her nephew Adam, to pretend to be his next arch-rival. Adam manages to get hold of some footage with Holt saying horrible things about Wuntch and he plays them behind Holt on a projector as he reads the eulogy. But Holt is smart. He plans a fake memorial, packed with members from a local improv group.

However, toward the end, the captain is serious and realizes that he would indeed miss Wuntch. He reads an emotional eulogy, which says: “As many of you know, Madeline and I were bitter rivals, but I’ve come to realize that she held a special place in my life. No one challenged me like she did, or made me feel as alive. Our relationship was like an epic chess match, and it’s hard to believe that she’ll never make another movie.” Meanwhile, at the end of the episode, Amy reveals to Jake that she is pregnant.