When Does Bubble Guppies Season 5 Start on Nickelodeon? 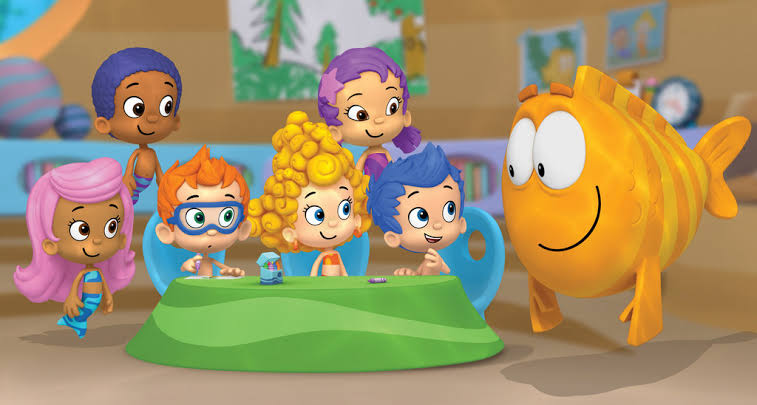 ‘Bubble Guppies’ is an animated kids tv series that airs on Nickelodeon and originally debuted on January 24, 2011. Created by Jonny Belt and Robert Scull, it is an amalgamation of a sketch comedy, educational series, and musical show that narrates the everyday events in the lives of underwater mer-people, studying in preschool, and their pets.

‘Bubble Guppies’, after the finale of its fourth season, was canceled in 2016. Now, after a hiatus of almost three years, it is coming back on tv screens. Here’s all we know about ‘Bubble Guppies’ season 5.

Bubble Guppies Cast: Who is in it?

Gil (voiced by Quinn Breslin) is a guppy boy, who serves as the co-host of the show alongside Molly. He leads the crew and most of the time, manages multiple guffaws from viewers with his silly antics. Gil is prone to scares and appears during the transitional sections of ‘Bubble Guppies’. Molly (voiced by Brianna Gentilella, Bailey Gambertoglio, and Taylor Kaplan) is a tiny guppy girl with a kind, empathetic persona. She helps Gil in his co-hosting duties and is forever attentive so that he does not land in problems. Bubble Puppy (voiced by Frank Welker) is Gil’s pet pup and closest buddy.

Goby (Caleb Clark) is another guppy boy with an active imagination. Deema (Catherine Bradley) is a sweet and quirky female guppy. Just like Goby, she has a knack for wild imagination. Oona (Colby Kipnes) is also a guppy girl with a pleasant personality. Nonny (AJ Kane) is the wittiest among all the guppy boys. Polite, mature, and smart, he guides Deema in creating new words and helps out his friends when they get stuck with answers to complicated questions.

Zooli (Leah Javier) is the new arrival in the group, who makes an entry in season 5. Spunky, smart, and an animal expert, she is the perfect addition to this creative team. Mr. Grouper (Ozzy Osbourne) is the preschool teacher. He helps out his guppy students and supports them through their ideas, suggestions, and imaginations.

Bubble Guppies Plot: What is it about?

‘Bubble Guppies’ transports us to the fictional underwater city of Bubbletucky. The show follows its little guppies as they get ready for school, find amazing water animals, embark on adventures, tend for their pets, and save the mythical realm of Bubbledom. The Emmy-Award-winning and interactive CG-animated title chronicles the quests of these curious, diverse preschoolers with vibrant fish tails as they discover new things in their submerged home. Its soundtrack is catchy and comprises educational pop songs . Additionally, it also focuses on topics that embrace the elements of kindergarten curriculum, such as basic math, literacy, the arts, science and socio-emotional development.

Each episode begins by throwing the limelight on Molly, who introduces herself by saying — ‘Hi: it’s me: Molly: and it’s time for—’. Without even allowing her to complete, Gil steps in and enacts something that defines the featured episode’s theme. After he finishes, they say: ‘It’s time for Bubble Guppies!’. With this, the theme song starts and culminates by revealing Little Fish who announces the current episode’s title.

The story starts by following the bubble guppies as they head for school. Sometimes, this event is incident-free and at other times, something or the other may happen. There are instances when Avi breaks his tail and an emergency occurs just before Oona leaves for school. Once the kids reach their classroom, they are welcomed by their teacher, Mr. Grouper — who listens to their earlier experiences from the day. Mr. Grouper suggests that they should put on their thinking caps and delve deep into the topic at hand. Thus begins the episode’s primary theme and the entire story revolves around it. During the narration, it might happen that one of the guppies need to visit a site, related to the topic. The owner of that place (usually Deema) guides the guppy boy on girl in purchasing the right item that would help him or her solve the current problem.

Soon after, the school breaks for lunch and we get to hear multiple food-related jokes. This is when the show transitions to feature a sketch by Molly and Gil. After class resumes, there are some additional activities that revolve around the episode’s theme. Sometimes, Mr. Grouper lends his own thoughts on the subject. Once this session ends, the team heads outside, performs a song, and leads to Gil and Molly, who do another sketch. Certain episodes also follow the guppies as they go on a field trip, which again reinforces the topic. Toward each episode’s conclusion, we  see the final sketch performed by Gil and Molly.

Season 5 features a new guppy named Zooli and follows the gang as they attempt to stop the evil Sea Witch, who steals their magical jewels and wants to rule the Seven Seas.

Bubble Guppies Season 5 Release Date: When does it premiere?

You can check out the official trailer for season 5 and show’s previous episodes on its official website.