Will There be a Buddy vs Duff Season 3? 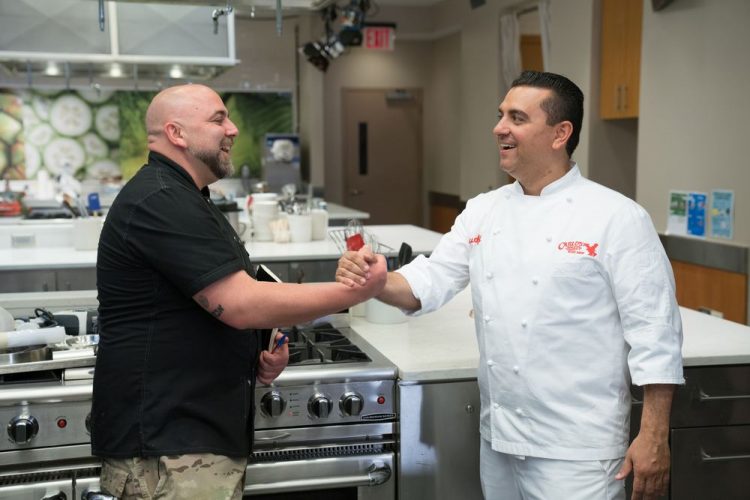 ‘Buddy Vs Duff’ is a cake-baking competition show that first premiered in March 2018 on Food Network. Renowned bakers Buddy Valastro from TLC’s ‘Cake Boss’ and Duff Goldman — from Food Network’s ‘Ace of Cakes’, battle each other in a tough competition ultimately determining who would be the baking king between the duo. The challenges thrown at the duo test every aspect of baking — ranging from baking techniques to taste and design skills.

After a successful inaugural run, the show was renewed for a second season. Now that season 2 has come to an end, read on to know if there will be a ‘Buddy Vs Duff’ season 3.

Buddy vs Duff Season 3 Release Date: When Will it Premiere?

A third season for the show is still to be announced by Food Network. But considering the popularity of the series, we would be surprised if it does not get another installment. If renewed, we can expect ‘Buddy Vs Duff’ Season 3 to premiere sometime in March 2021.

The main showstoppers in this reality program are acclaimed cake masters and pastry chefs Duff Goldman and Buddy Valastro.

Jeffrey Adam aka Duff Goldman was born in Detroit, Michigan and held an interest in cooking from the age of fourteen — when he started working in kitchens and bagel stores. When he was still a sophomore in college, he applied for the position of a cook in the best restaurant in Baltimore, Charleston. However, the head chef – Cindy Wolf didn’t find his resume impressive and offered him a job which would involve making cornbread and biscuits.

So, to polish his cooking skills further, Goldman joined institutes such as the Corcoran College of Art and the Culinary Institute of America to work and learn under expert chefs. Finally, in 2010, he started his own baking business — Charm City Cakes — which specialized in unique, unusually sculpted cakes. He then progressed to make cakes for several celebrities and in 2009, released the book Ace of Cakes: Inside the World of Charm City Cakes. Goldman’s work has appeared on the ‘Food Network Challenge’, ‘Iron Chef America’, ‘Oprah’, ‘The Tonight Show with Jay Leno’, and ‘Man v. Food’.

Bartolo aka Buddy Valastro was born on March 3, 1977, in New Jersey. He started working at his family-owned Carlo’s Bakery from 11 years of age and succeeded his father after his death. The shop has also been featured on Cake Boss. Carlo’s, after gaining recognition from the show, now has 17 additional branches. Valastro specializes in everything — ranging from catering to corporate events to family gatherings, weddings, and galas. He has also featured in other shows like Kitchen Boss, The Next Great Baker, and Buddy’s Bakery Rescue.

In the words of Courtney White, President of Food Network, “Audiences have come to recognize Buddy and Duff as the biggest names in cake, known for creating larger-than-life, jaw-dropping delectable designs as well as massive baking empires.” He further added, “Never before have these two baking icons gone head-to-head in a competition, until now.”

Apart from the duo, other prominent appearances on this reality show include popular chefs as special guests and judges. Some of the notable names are Sherry Yard, also an acclaimed pastry chef, who was on the judges’ panel in ‘The Great American Baking Show’ — and Spice Girl Emma Bunton, alongside Keegan Gerhard, chef of ‘Food Network Challenge’. They are frequently visited by prominent celebrities like Florian Bellanger, Kevin Delaney, Christina Anstead, Hannah Hart, Waylynn Lucas, Penn & Teller, Gesine Prado, Richard Rawlings, and Aarti Sequeira. Each of them play a crucial part in determining the final winner.

Season 3, when renewed, will obviously see Buddy and Duff making comebacks, accompanied by a rotating panel of celebrity judges.

What Can Buddy vs Duff Season 3 be About?

In season 1, the intense 6-week long competition tests both Buddy and Duff to use their creativity to the fullest as they whip out the most amazing, striking, and unique baked specimens.

Each episode comprises of two rounds. The first round, namely Bake Off, asks the duo to recreate their family-favorite recipes. Second is the Cake Off round, where they use their imagination to carve out the most awesome, edible, and baked sculptures.

Not only this, there are other challenges that come their way as well — ranging from making carnival treats to curating complex Bollywood-inspired cakes. Wait! It does not end here. They also have to cater to the demands of customers during the morning rush hours at the famous Randy’s Donuts in Los Angeles. Additionally, the duo has to carve out-of-the-world desserts from a group of dog enthusiasts and try to impress a couple on their D-day with the best wedding cake.

In the final face-off during the finale, Buddy and Duff set their minds at work to make the most impressive, monumental, chocolate cake — that can hide wedding rings. For the second round, they head back to their respective shops in order to arrive at the best space-themed cake.

Check out what the pair had to say about the show in their interview with Metro US:

According to Buddy, “The hardest was definitely the finale. We had four days to make the final cake. I worked four days straight, 20 hours a day- I slept in my office.”

In season 2, the stakes are even higher, as the format challenges “every aspect of what it means to be a true pastry artist and cake master,” according to Food Network. While Duff was the winner in season 1, the tables were reversed in season 2. Season 3 will continue to follow the duo as they make more fascinating creations in their own signature styles. While Duff concentrates on the intricacy and detailing of his cakes, Buddy focuses on more gigantic masterpieces.