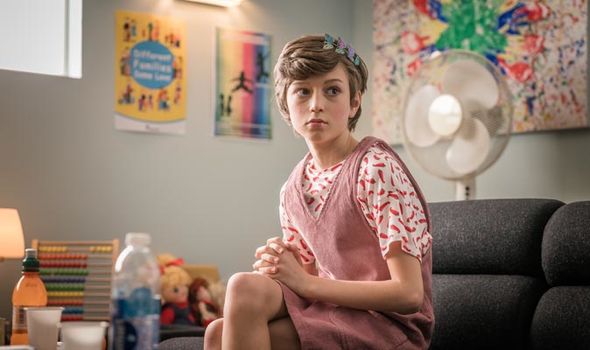 Most want to comprehend, and are broadminded and empathetic towards transgenders, but yet there are still a dime a dozen out there who are the haters and would rather shun them as outcasts. For parents, it is often a very difficult decision on how to raise a child who identifies as the opposite sex — or no sex category. Puberty, when it dawns, brings about transformed feelings in many individuals. Teens tend to go back to their roots when adolescence hits and realization strikes that the feelings they had as kids is what they want for themselves even now.

One of the most stirring miniseries streaming on Hulu is the sensitive family drama Butterfly – a compelling and challenging story about separated parents who differ in their approach towards their youngest child, Max, who classifies as a girl despite being born as a boy, and how they react to it in very different ways. What awaits the entire family involves the utmost test of love and understanding. The ITV series is created and written by BAFTA-winning screenwriter Tony Marchant and premiered on January 18, 2019.

The long-term outlook for families who don’t accept their children as “Trans” is generally extremely sad and can’t be mended. Hopefully, trans youngsters who watch this will know they are not alone and are in fact, courageous teens facing something that takes enormous courage within a community to stand up for and hope for others to stand by them.

Butterfly Cast: Who’s in it?

Butterfly rounds up a wonderful cast where Anna Friel plays Max’s mother, Vicky, and Emmett J. Scanlon his father, Stephen. Callum Booth-Ford plays Max Duffy, and Lily played by Millie Gibson is Max’s sister. International Emmy winner Friel is a familiar face on U.S. screens. There are some significantly good performances in the show, but none in the least as moving as the young actor enacting Maxine.

Butterfly Plot: What’s it about?

“Butterfly” is about the harsh bond between a couple, Vicky and Stephen, their separation and difference in outlook over how to support their gender alternate child, Max. From a very young age, their now 11-year-old son has acknowledged himself as a girl and tendered signs of transgender dysphoria. The series feels a bit gauche at times, but yes, there are quite a few parents of trans kids who act like Stephen the father, but to make up for it there are numerous others who are more like Vicky the mom, understanding but irresolute.

Max adorned girlie clothes, jewellery and puts on make-up ever since he was a 5-year-old child when at home. His mom Vicky single-handedly raises Max and his sister Lily. She and her husband Stephen, separate when their son is 8 years, leaving them to fend for themselves and handle life and its complexities. Their perceptions vary and this manifests itself in an ugly difficult situation where the dad has to actually slap Max hard as the youngster just wouldn’t stop at being an ordinary boy that he wanted him to be and remain. Stephen is left powerless to comprehend or handle his son’s gender issues.

In all aspects, Max presents himself as a normal boy to the public esp when their dad takes the children out; he does so only to appease his father, never ever wavering from the want to feel, and live as a girl. At some point, after his father is unable to take stock of it and leaves the kids and their mom to their own devices, Max feels haunted and trapped staying a boy, he contemplates and attempts suicide just to escape it once and for all forever. He knows he will never ever be able to revert to his birth gender. He fails at his try of committing suicide and his mom who is unsure of what to do, allows his dad to return to live with them so that the children have both parents living under one roof and being there for them. Although, the couple has by now drifted apart to an extent. However, things in between seem to have taken a small twist as Stephen has in the meantime found himself a girlfriend and developed sweet feelings for her.

On return to the house, he introduces Gemma his new girlfriend to the children not expecting what a shocker is going to be hitting them all real soon. Max openly drops the bomb by declaring that if he is to live, he wants to be acknowledged and accepted as a girl in open society and wants to henceforth be addressed as Maxine. Fortunately, this time around, the father understands and accepts the harsh reality and goes on to encourage and support his child to transit to the female gender. One of the prodigious things that the whole tale recognizes, though, is that the predictable perception of parenting Trans Kids has altered radically.

It is good to see that Trans issues are getting some concrete airtime in an affirmative and encouraging way. It is an issue that is misconstrued by so many. It is also great to see a well-written anecdote that correctly portrays the substance material. It features characters in conflict with their natures, understandings in worse or better environments created for them unknowingly. It seems to cover the genuine apprehensions and hopes faced by families in such a state. With any luck, it will do away with ‘fear of the unknown’.

Butterfly Season 2 Release date: When will it premiere?

Butterfly began streaming on Hulu in the U.S. on January 18, 2019. Featuring just 3 heart provoking episodes, it is an intense drama uncovering a very sensitive and challenging grim subject exceptionally well, to aid understanding and awareness to all. Maxine’s story is an account of optimism to the differentiated and cruel times that we live in and merits a watch. Each episode is sure to intone, confound and captivate.

As far as the next season goes, we are hoping that the story Max’s story doesn’t end here and we follow him further in his journey as Maxine, but unfortunately don’t have an official announcement yet. Though considering appreication that the show has received, we would be surprised if it doesn’t get renewed. Out best guess is that if the show does get renewed, Butterfy season 2 can release sometime in 2020. We will update this section as soon as we hear more.

While we wait for the release date of season 2, check out the season 1 trailer to refresh your memories. You can head to Hulu to catch all the episodes of the first season.