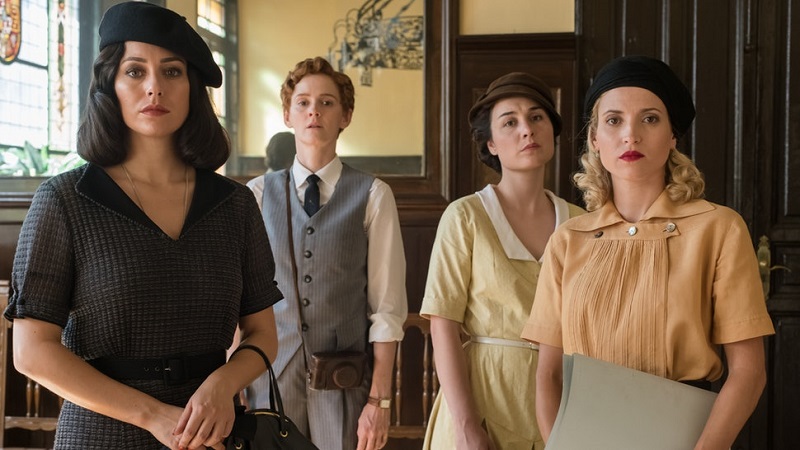 ‘Cable Girls‘ gained immense popularity on Netflix, telling the story of four young women, who land jobs at the first national telephone company in Madrid, in the 1920s. Their work becomes a marker for progress, but they soon realize they must depend on each other to navigate the male-dominated workspace. Ultimately, we learn more about these women over the seasons, who form various attachments to families, partners, and memories.

The final arc starts with Lidia at the reeducation camp after being arrested along with Carlos. The latter is killed by Romero, for desertion, but it is made to look like a suicide. As a result, Carmen, who’s in charge of the reeducation camp, gives Lidia a hard time, believing her to be responsible for Carlos’ death. Soon, Lidia manages to escape with her friends, but Marga is arrested, forcing Lidia to make moves to ensure Carmen doesn’t harm her.

Lidia initially goes to Elisa, Carmen’s daughter, and learns of a grand escape plan. However, when Romero kills Elisa, Carmen wants Lidia to capture him so she can have her revenge. Their escape plan runs into many hiccups, but just as they are about to leave Spain’s borders, they are stopped for a final time. The women know what they must do, and are prepared for the ultimate sacrifice to top their lifetime desire for liberation. Just when we think they are free, the officers shoot at them. The ending, however, is a bit open-ended, with the women coming out of their houses to face the officers, while we see the others trekking as refugees, leading us to believe that the cable girls died to save their friends and give them a second chance at life.

It is a wonderfully touching note on which to end the season, which might make you wonder if there is any chance of a ‘Cable Girls’ Season 6. Let’s find out.

‘Cable Girls’ Season 5 aired the first bunch of episodes on February 14, 2020, and the show wrapped up on July 3, 2020. Unfortunately, the current season marks the end of ‘Cable Girls,’ as a series. Netflix had announced beforehand that the second part of Season 5 would serve as the farewell that fans deserve. Therefore, people walked in knowing that there’d be nothing more to the story. You can check out the show’s official tweet, hinting that the final chapter comes to an end.

As far as the story itself goes, there is little more to add. The tale has brought a beautiful conclusion to the character arcs. The women who fought for liberation all along, give their lives for the cause. The open-ended nature of the show helps it end on a hopeful note. Therefore, ‘Cable Girls’ Season 6 is officially canceled. The series has had a good run on Netflix and has woven an exciting tale with sharp societal commentary. It remains one of the famous Spanish period dramas on the streaming platform. The final episodes prove why the show has enjoyed such hype and adoration, as we are struck by the bravery these women display.