Cannonball on USA Network: Everything We Know 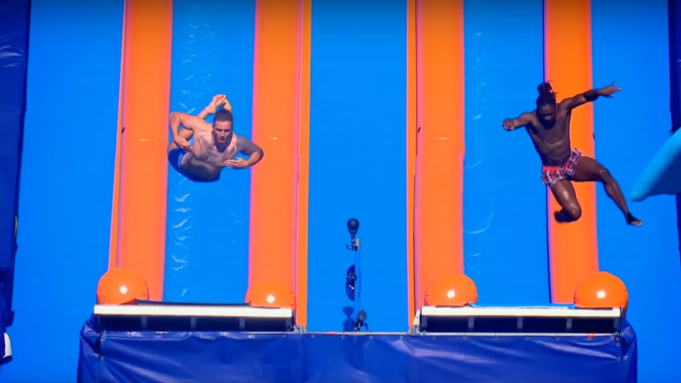 ‘Cannonball’ is USA Network’s rendition of the superhit franchise that originated in the Netherlands by Talpa. The wacky competition features a bunch of contestants, participating in a series of the weirdest water-based sports. The ultimate goal? Win a grand cash prize! If you are a fan of unscripted game shows, then ‘Cannonball’ should definitely be included in your must-watch list. And if you are still not convinced, then our detailed preview is here to help you in making up your mind. Read on!

‘Cannonball’ is hosted by Mike Mizanin and Rocsi Diaz. WWE star Mike made his tv debut in ‘The Real World: Back to New York’. In the world of WWE, he has bagged multiple championship titles, including the WWE Championship, Intercontinental Championship, and Tag Team Championship. He additionally appears in ‘Miz & Mrs’ and has starred in ‘The Marine’ franchise, ‘Christmas Bounty’, and ‘Santa’s Little Helper’.

On the other hand, Rocsi is an Emmy Award-winning television personality, who has presented ‘106 & Park’. She is a daily correspondent on Entertainment Tonight and has hosted ‘The Daily Share’, ‘Dating Naked’, ‘Behind The Movie’, and ‘Chatter’. Simon Gibson features as the sideline reporter. He is a comedian, who had previously appeared in ‘Just For Laughs New Faces’. Additionally, he stars in ‘Inside Jokes’ and hosts ‘Last Call with Carson Daly’.

What is Cannonball About?

“CANNONBALL will feature contestants from all across America facing off in one of the biggest, wettest, slippery-est water sports competition ever created. From sliding off a 100-foot waterslide to rocketing off one of the world’s fastest drop towers, CANNONBALL contestants will battle a variety of water obstacles to win a $10K cash prize” — as described by the USA Network in its official synopsis.

Season 1 follows 16 contestants who battle each other in the toughest series of physical challenges, with one player being eliminated in each episode — until only a single champion remains. The winner takes home a grand cash prize of $10,000. Its format is based on the Talpa franchise that originated in the Netherlands, which has also been adapted into full-fledged shows in Australia and ITV. Heather Olander, senior VP of Alternative Development and Programming for USA Network, explained why the series qualifies as such an enjoyable watch. Olander said: “Cannonball’ is pure fun in the sun for the whole family to enjoy. Filled with splashes, laughs, and friendly competition, we are all thrilled to add such an energetic series to our schedule.”

You can check out the official sneak peek for season 1 of the show below: