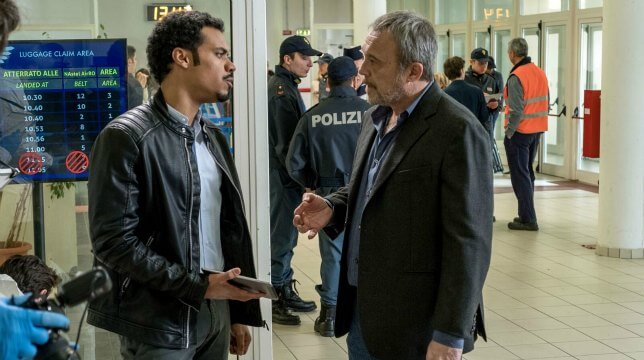 Carlo and Malik is an Italian crime series that first premiered on Rai TV on November 19, 2018. The show was a big success, which prompted Netflix to acquire yet another Italian series from the Rai TV– after Maggie & Bianca Fashion Friends and Medici: Masters of Florence. Carlo and Malik (Nero E Meta in Italian) premiered as a Netflix Original on the platform on March 22, 2019. The show is directed by well known Italian director Marco Pontecorvo.

Carlo and Malik Cast: Who is in it?

Carlo and Malik Plot: What is it about?

Veteran inspector Carlo Guerrieri, young 28-year-old deputy Malik Soprani, and Carlo’s daughter, Alba (a medical examiner), form a team in the Rione Monti police station to investigate crimes in their area. Malik — who is originally from Ivory Coast, but grew up as an adopted child in Italy — is basically a rookie cop who soon creates havoc after he lands at the station. There is also a love triangle between him, Alba, and her fiance Riccardo. Carlo — a single father — is fiercely protective of his daughter. Completing the team are chief superintendent Mario Muzo and superintendent Cinzia Repola, young agent and Malik’s academy partner Marco Cantabella.

Carlo is an experienced officer, who is well-respected by his fellow officers. Often stubborn and determined to bend any rule, he is an introvert guy who usually has his disagreements with his superiors.  His sensitive nature also makes him able to understand the minds of criminals on the run. In one incident, he is falsely accused of the murder of a drug dealer named Bosca but is ultimately proved innocent with the help of his team. Malik — on the other hand — has quite an opposite character. He deals with every case, using prudence, practicality, and detachment. Finally, he falls for Alba, though in the past, he was quite successful with women.

Mario — married to his colleague Olga — has a complex character and often suffers from panic attacks. He frequently has disagreements with Malik but knows that he has good working skills. Alba — a witty, smart young woman — falls in love with Malik, and she is also very close to her dad Carlo. Marco is an old friend of Malik, a bit insecure, and is infatuated with Cinzia, although he has a girlfriend. Cinzia is a sweet, understanding, and kind woman. Alice is the woman who had adopted Malik, Cristina is Claudio’s newsagent and lover, Micaela is the new manager of the Flying Squad and ex of Malik, Giovanna is Alba’s legal doctor and mentor, and Elia is a retired, old buddy of Carlo.

With such a varied and interesting mix of members, Carlo and Malik solve different cases during the complete run of the season. Filmed in Rome — this series brings up several of the city’s landmarks on the small screen — such as Rione Monti (headquarters of the Commissariat), the Rione Esquilino, the clubs overlooking the Tiber and the historic center.

Carlo and Malik Season 2 Release Date: When will it premiere?

Carlo and Malik Season 1 premiered on Netflix on March 22, 2019, for its international audience. Season 1 comprised of 12 episodes in total, with each episode having a runtime of approximately 50 minutes. The series received a tremendous response from its Italian viewers upon its release. The international response may not match up to that, but certainly Netflix hopes for something similar with all the content it acquires. For instance, Netflix’s Indian crime series Sacred Games was a global hit. Like with Netflix’s previous Italian shows, Carlo and Malik is accompanied by both Italian and English subtitles. There’s no dubbed version. And, of course, we all know that any series is best experienced in its original dialect.

As far as Season 2 goes, neither Rai TV nor Netflix has made any announcement as of it. We believe only if Rai TV decides to make another season, we will get to see more of Carlo and Malik. Otherwise, it is goodbye for them. In an unlikely scenario the show does get renewed, Season 2 can only release sometime in 2020.

You can check it out the trailer as well as the full show here: