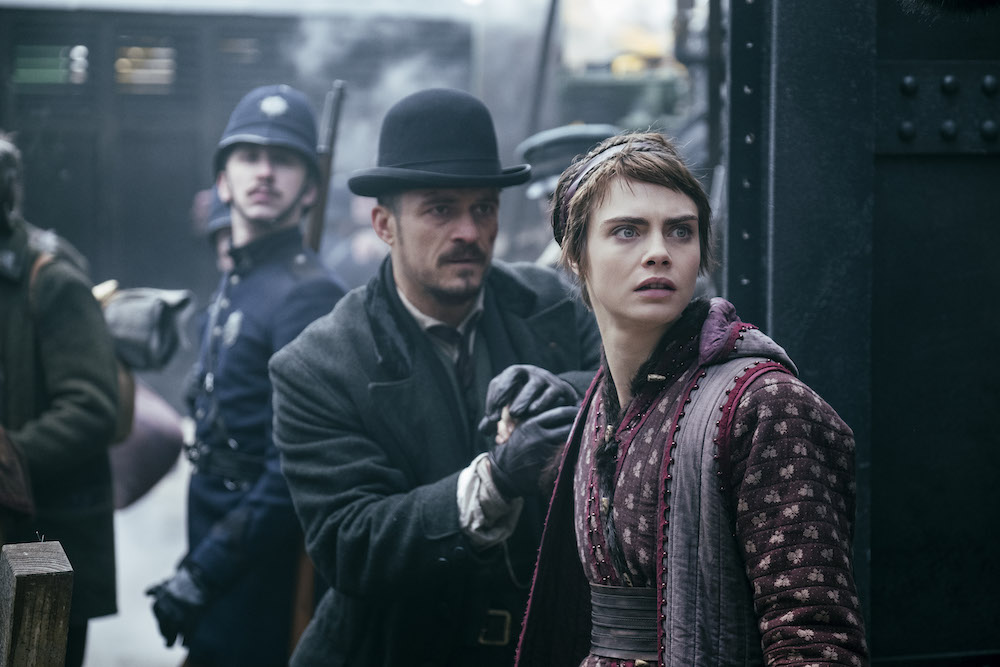 Created by René Echevarria and Travis Beacham, Amazon Prime Video’s neo-noir fantasy series ‘Carnival Row’ follows Vignette Stonemoss, a fae who escapes from her war-torn homeland of Anoun to the Republic of Burgue. Vignette manages to gather a group of refugees to escape with her but fails to complete the fleet. Encountered by a winter storm, the ship gets wrecked, but Vignette manages to escape as she gets washed up on the shore. The series progresses through Vignette’s life in Burgue, as she meets her lover Philo, whom she believed to be dead in the war. The show is based on a film script Travis Beacham wrote, titled ‘A Killing on Carnival Row.’

Originally premiered in August 2019, ‘Carnival Row’ was praised for its captivating production design and visual effects but was criticized for the shallowness of the narrative and the mythological foundation. Still, the show’s aspiration to blend the genre elements of fantasy with a political commentary was well-received, increasing the curiosity over the future of Vignette and Philo. As the second installment is gearing up for the screens, here’s everything you must know!

‘Carnival Crow’ season 1 released in its entirety on August 30, 2019, on Amazon Prime Video. The first season comprises eight episodes with a runtime between 50-67 minutes each.

As far as the second season is concerned, here’s what we know. On July 27, 2019, Amazon announced the second season of ‘Carnival Row,’ even before the premiere of the first season. The filming of the second season began on November 11, 2019, in the Czech Republic, but was interrupted by the COVID-19 pandemic in March 2020. The crew had to stall the filming for a while but continued shooting after a break under strict pandemic protocols to complete the two-week schedule.

The filming restarted once again in May 2021 in Prague to film the remaining scenes with Orlando Bloom (Philo). Finally, the filming wrapped on September 16, 2021. For season 2, Erik Oleson took over as the showrunner as Marc Guggenheim got engaged with various other projects. Co-creator Travis Beacham has also departed from the show due to creative differences. Taking into account these changes and the extensive post-production schedule, the series might demand more patience from its fans. Therefore, we expect ‘Carnival Row’ season 2 to release sometime in Q2 2022.

A peek behind the scenes to celebrate our last day of production on Season 2 of #CarnivalRow! ✨ pic.twitter.com/kTrIqxm0YM

Carnival Row Season 2 Cast: Who is in it?

The notable omissions in the season 2 cast are Jared Harris (Absalom Breakspear) and Indira Varma (Piety Breakspear), as the respective characters are killed in the first season. Jamie Harris, who portrays the recurring role of Sergeant Dombey is promoted to the main cast for season 2.

Carnival Row Season 2 Plot: What is it About?

The season 1 finale ends in an epic showdown as Philo and Vignette unravel the mystery behind the murders happening in Burgue. Philo realizes that those murders happened under the command of Piety Breakspear, who believed in the prophecy that Philo will come into great powers. The envious Piety, who created the Dark Asher monster, commands the murders that happened earlier in the season, including that of Philo’s mother. Absalom, who tries to convince Piety that Philo wouldn’t grow as a threat gets killed by her. Philo, upon realizing the truth defeats the Dark Asher. Meanwhile, Vignette kills Piety to bring back Carnival Row into normalcy.

Season 2 of ‘Carnival Row’ will begin with Philo’s acceptance of his fae identity to join Vignette and her group. The season will continue exploring the conflicts and segregation between the faes and the humans, which might even grow to an uprising. This will be the stage for Philo to ponder over his half-fae, half-human identity to choose his allies and sides.

In an interview given to EW in August 2019, former showrunner Marc Guggenheim talked about his plans for season 2 with respect to Philo’s identity crisis. “The trick for Philo is, it’s not, unfortunately, as simple as him embracing the fact that he’s fae. To the fae, he’s not really fae. He’s a half-blood. So, he basically is a man without a country. You know, he’s not human enough for the humans, but he’s not fae enough for the fae. He kind of exists in this sort of status Twilight Zone. So that’s another thing that he’ll be wrestling with in season 2,” he said.

The second installment will also see challenges and changes faced by Philo and Vignette in their relationship as both of them will be fighting distinct predicaments for their survival. As Imogen and Agreus are on a sail to the distant lands, the season will also explore their storyline and the adventures they come across in new worlds. The enigmatic relationship of Jonah and Sophie might also see some unexpected changes in the second season.