Are Carson Shaw, Greta Gill and Max Chapman Gay or Bisexual in A League of Their Own? 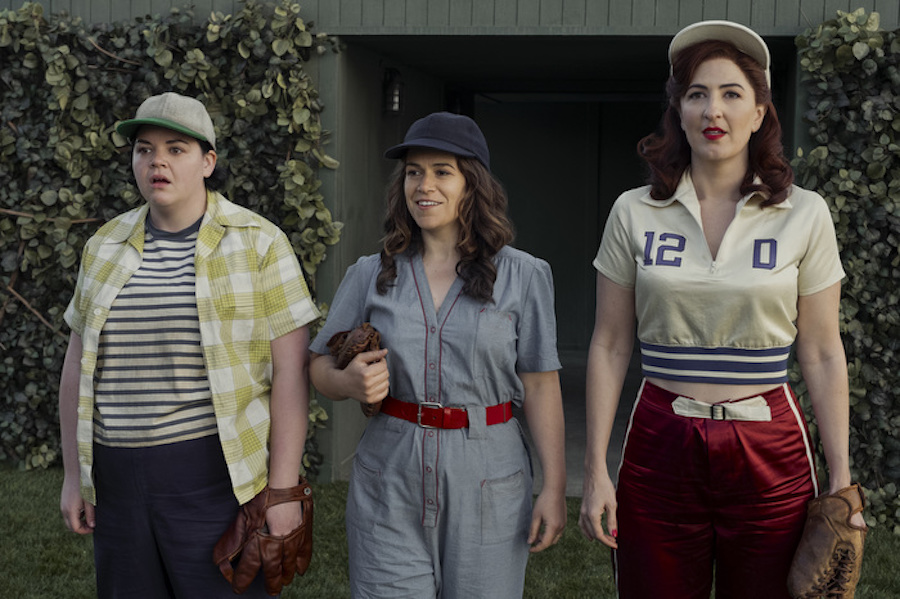 Prime Videos’ ‘A League of Their Own’ is set in 1943, where a first-of-its-kind women’s baseball league gives the opportunity to women players to come out and show their talents. While everyone else is focused on how they look and whether or not they are feminine enough on the field, the women are only focused on proving their skills. While the show is mainly about baseball, it also focuses on the personal lives of the women, most of whom are discovering new things about themselves and finding out their place in the world.

Carson Shaw, Greta Gill and Max Chapman are the main characters of the show, and all three of them are trying to come to terms with their sexuality while also honing their game. If you want to know where the three of them fall on the sexuality spectrum, here’s what you need to know. SPOILERS AHEAD

Are Carson Shaw and Greta Gill Gay or Bisexual?

Carson Shaw runs away from her unhappy marriage to play for The Peaches. While baseball makes her happy, it is meeting Greta that truly changes her life. Carson first discovers that Greta is interested in women when she kisses her on their first night as the Peaches. This leads Carson to reconsider her own sexuality, which strains her feelings for her husband, Charlie, as well her budding romance with Greta.

When Max asks whether she still loves her husband, Carson says that she does. But she is in love with Greta as well. As opposed to Max, who finds being with a man repulsive, Carson finds it a considerably pleasant experience. This proves that Carson is actually bisexual. Unlike her, however, we don’t get to know Greta’s feelings about being with men.

When she speaks about her previous relationships, all of them include women. When she goes out holding hands with men, it is simply because she doesn’t want anyone to question her sexuality. She flirts with men to uphold her image as a just another normal woman, but it doesn’t look like she is particularly close to any man or harbours feelings for them like Carson does for Charlie. This means that Greta is probably not interested in men and is gay.

Is Max Chapman Gay or Bisexual?

Max Chapman is gay in ‘A League of Their Own’. We first discover that she is queer in the scene where the pastor’s wife shows up at the salon at night. It turns out that the two of them have been secretly meeting each other for some time. But while the pastor’s wife is protected by her marriage, Max is still single which is why everyone keeps trying to set her up with a man. They break-up when Max discovers that this relationship will never get serious and is probably just a distraction for the woman that she actually wants to be with.

In trying to get herself on the factory team, Max tries to get close to Gary. She goes on double dates with him, in the hopes that he will help her becomes the pitcher for the team. Later, when she fails to display her talents and feels humiliated by it, she decides to change herself to the conventional image. She has sex with Gary, but doesn’t like it. She shares this feeling with Carson, where she says that she can’t imagine being with a man. Her feelings for women, however, are completely different on that front. This shows that Max is gay.

When Max meets Esther, who is also a baseball player, she is instantly attracted to her. During a match, Esther gives Max the opportunity to play which eventually lands her a spot in Red Wright’s team. Now, she is playing professional baseball and gets to be the woman that she really likes. Her happiness suggests that this is the life she’s always wanted and this is who she’s always been.

Read More: Do Carson and Greta End Up Together in A League of Their Own?