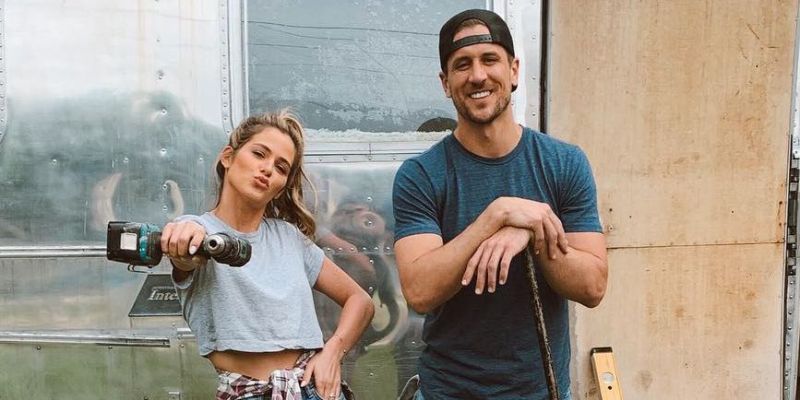 Transforming your property to the ideal short-rental home is a successful entrepreneurial business proposition. While traveling, people generally wish to stay in a place that would enable them to experience local traditions, beliefs, culture, and food.  As a homeowner, it is a good deal, if you know the right techniques on how to renovate your home into short-term rental spots. CNBC’s new show Cash Pad’ showcases this exact idea of how ordinary spaces with unrealized potential can be remodeled into profitable vacation-rental hot spots (HGTV’s ‘My House Is Your House‘ is also based on the same idea).

Cash Pad Cast: Who is in it?

JoJo Fletcher and Jordan Rodgers, who had met each other on ‘The Bachelorette‘, star as house flippers who guide owners through the entire home improvement process. JoJo Fletcher, who has also appeared on the ABC show, ‘The Bachelor‘, is also recognized as a talented real estate developer. She has led many renovations, including a striking property in Dallas property. In fact, she has a knack for tearing down walls and pulling them back, all within a set budget. After meeting Jordan, she exposed him to the sphere of house flipping and since then, they have executed several projects together. You can find several instances of their work on their social media accounts.

JoJo Fletcher and Jordan Rodgers are expected to return for 2, if and when it happens.

Cash Pad Plot: What is it about?

On ‘Cash Pad’, JoJo Fletcher and Jordan Rodgers team up with homeowners and help them transform their abodes into profitable, cash-generating, short-term rental spaces. Combining their experience and creativity, the pair attempts to utilize the unused potential of forgotten areas such as rusted airstreams and old, backyard bungalows. They then remodel these spaces into striking “vacation goldmines.”

As per Jordan, “The short-term rental market is booming. Right now, people all across the country are choosing to stay at cool, unique properties instead of cookie-cutter hotels.” Hence, the duo aims to build a strong portfolio that highlights their ability to create money-making, short-term rentals in the most competitive markets. They travel across the country, meeting families, and helping them out, while also getting emotional after the final outcomes are unveiled. The entire endeavor is a win-win situation for the owners as well since they receive a share of the profits.

Some of the projects featured on season 1 of the show include JoJo and Jordan visiting a rickety shipping container, a dilapidated airstream, and an unused garage. Whatever be the condition of the space, the duo takes up the challenge to convert it into a one-of-a-kind vacation hotspot. The renovated space offers a golden chance for homeowners to use their house as an income-generating pad. By partnering with property owners and investing in their havens, which need refurbishment, the involved parties finally share the profit among themselves.

Expect the team of Jojo and Jordan to take up several new and exciting homes and turn them into profitable ventures in season 2.

Cash Pad Season 2 Release Date: When will it premiere?

‘Cash Pad’ is yet another addition to CNBC’s slate of programming on its summer release schedule, which also includes other primetime titles (comprising 50 new hours of premieres), such as the original shows ‘Listing Impossible’ and ‘Five Day Biz Fix’. There are also returning seasons of the channel’s popular series, like ‘Deal or No Deal‘ with Howie Mandel, ‘The Profit: An Inside Look‘ with Marcus Lemonis, ‘Jay Leno’s Garage’, ‘American Greed‘, and ‘The Deed: Chicago’.

Considering the current market scenario for home rentals, it is sure to attract a lot of viewers, especially millennial house. It is, in fact, a great idea to gather inspiration from reality TV, if you are considering a property upheaval. When a decrepit looking home is changed into profitable rental place right in front of your eyes, how can not get inspired to work on your own home. With very little details left to your imagination, the task looks easier than what you might have initially thought.

Considering the success of the first season, there’s a good chance that the show will be back next year. If renewed, our best guess is that ‘Cash Pad’ season 2 will release sometime in July, 2020.

Check out the official trailer for Cash Pad season 1 below while you wait for season 2 announcement.