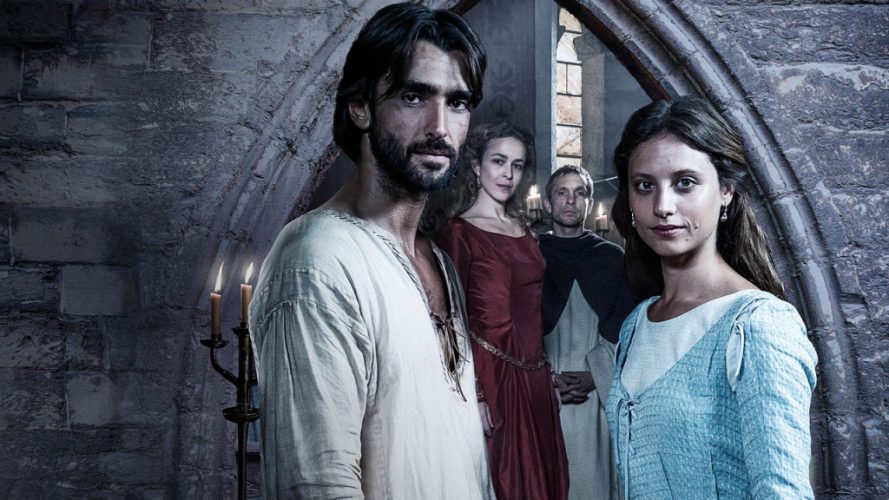 Cathedral of the Sea or La Catedral del Mar in Spanish is a historic novel written by Spanish author Ildefonso Falcones in the year 2006. Falcones revealed that it took him 5 years to finish this book which is believable as the book is 600 pages long. Ildefonso is a lawyer by profession but has also written two other books, The hand of Fatima and The Barefoot Queen. The Cathedral of the Sea was converted into a series which first aired on a Spanish channel called Antena 3 and later, was bought by Netflix. The series took 4 months and 70 different locations in different Spanish cities such as Extremadura, Castilla-La Mancha, Castilla y León, Madrid, Aragon, and Catalonia. They had to face a lot of issues in finding people who would be willing to finance the show, which is where Netflix stepped in.

The show is produced by Netflix and TV-3 together. The show first premiered on Netflix in September 1, 2018. The story is set in 14th century Barcelona and revolves around the character Arnau Estanyol and his story of loss, love, life and ultimately survival. The construction of Santa Maria Del Mar serves as the backdrop to this story which also birthed the name of the novel. Falcones also wrote a second book which is a sequel to the cathedral of the sea. It was published in 2016, ten years after the first novel.

Cathedral of the Sea Cast: Who is in it?

Netflix certainly has not made short of its high budget invested into the show, and it is self-evident when one looks at the strong star-studded cast. Granted, the actors who play the lead figures in this show are still not people that you would necessarily recognize as household names. But the point for all these localized productions that Netflix facilitates or acquires is to boost Netflix’s couch cred in that particular area.

Of course, we do not need to scratch our heads over other long-winded reasons why all the stars in the show are famous faces on the Spanish film and TV scene – after all, it a proper Spanish show rather than an international adaptation of Ildefonso’s novel. But ‘star-studded’ is still the proper modifier for the show’s cast nevertheless – for example, Aitor Luna, who plays the main character, is a major actor hailing from Guipuzcoa, with an almost two decades worth of professional acting career under his belt – he starred in the popular late 2000’s show, ‘Paco’s Men’ as Montoya, and has since appeared in more than a handful of AAA productions both on the film reel (Tourneys, Bakery in Brooklyn)and on Spanish primetime silver screen (Velvet, Captain Alatriste). Next to Aitor’s Arnau Estanyol is Pablo Derqui’s Joan, and the Isabel-starrer (2011-2012) absolutely steals the scenes he is on. Daniel Grao, known for Julia’s Eyes (2010) and El Alquiler (2017) portrays Bernat Estanyol in the first half of the show. The rest of the cast includes other noteworthy actors like Gines Garcia Millan and Andrera Duro.

As for the cast of season 2, nothing can be said with complete certainty for now since the show has not been renewed yet. However, the original author had written a sequel to the sourcebook. The sequel, Los Herederos de la Tierra, involves characters from the first book including Arnau Estanyol himself, so we will definitely see Aitro Luna again in the second season if everything goes as expected. However, the second book focusses on a new protagonist, Hugo, and it is not possible to predict who will play the character before any further hint is found to the same.

Cathedral of the Sea Plot: What is it about?

Cathedral of The Sea often invokes the vibe of Game of Thrones. Both of them are all about that medieval vibe, and moreover, Cathedral of The Sea has quite the huge production value. Although it does not parallel Game of Thrones, possibly the most expensive TV show in existence, the high budget necessary for it was unsurprising given that the producers had to employ about 170 actors and over 3500 extras (according to an article in El Pais), recreate large portions of Santa Maria, and had to enact two extravagant scenes of battle to boot. However, the chief distinction between the two shows is that Game of Throne is high fantasy, whereas Ildefonso’s La Catedral del Mar is through and through a historical story grounded in reality that tries to explore several aspects that underpin the historical 14th century Bercelona under serfdom, the social dynamics that come with it, and of course, the Spanish Inquisition (no funny Monty Python business here).

The story traces the journey of Arnau Estanyol, a peasant boy who escapes the clutches of serfdom with the help of this father Bernat. Bernat tries his best to raise his son by taking up odd jobs such as pottery and horse grooming. As Bernat dies during the famine (not before he has eventually adopted another son), Arnau finds work in the construction of the large Catholic Church when he realizes he now has to look after himself and his adopted brother.

The titular church, Santa Mario Del Mar, acts as a backdrop to Arnau’s life and times as he grows up under the several historical events that criss-cross his path and tries to fit into the Christian society.

The director of the show Jordi Frades told the Spanish paper, “The novel is very cinematographic and because when you do The Cathedral of the Sea, you have to leave the egos aside because you are telling a thing that people have read.” He explained how the show was a faithful reproduction of the book and not much was changed. When asked the novelist about the book that inspired the show he said, “I’ve always liked reading this kind of genre, and therefore I decided to set The Cathedral of the Sea in a splendid period for Barcelona — the 14th century.”

Cathedral of the Sea Season 2 Release Date: When will it premiere?

Cathedral of the Sea Season 1 premiered on September 1, 2018. A second season for the show has not been greenlit yet, but there is source material source at the ready should the crew manage to get their hands on Ildefonso’s sequel to La Catedral del Mar, Los Herederos de la Tierra (The Inheritors of the Earth). The second book is set ten years after the events of the first and follows Hugo Llor, a dead sailor’s 12-year-old son, who works in a shipyard under Arnau Estanyol. If an air date for Cathedral of the Sea season 2 is announced (which we believe would be sometime in Q4 2019), you will be the first to know.

Cathedral of the Sea Trailer

There is no news as of now on the second season of the series. You can get a peek of season 1 here