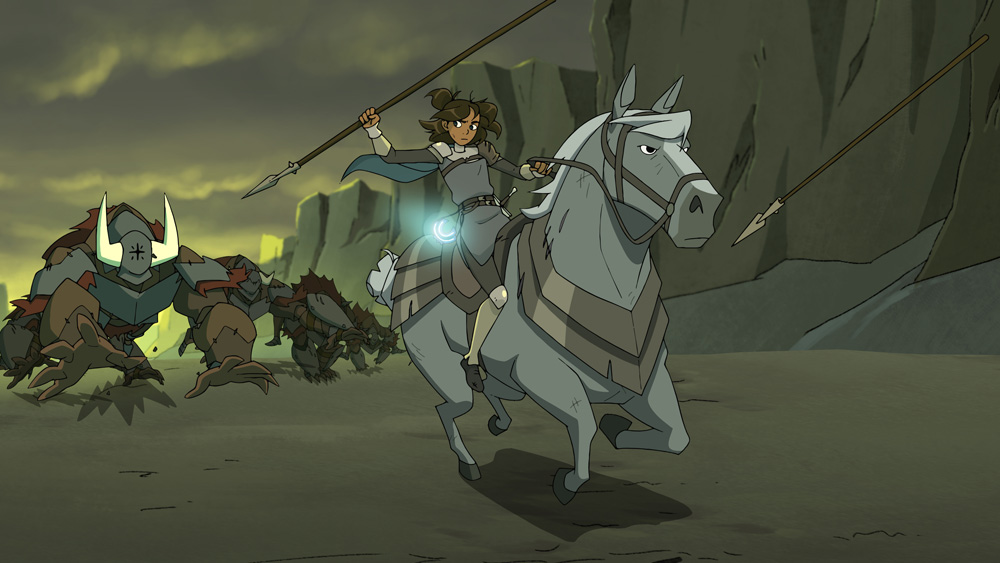 Created by Megan Nicole Dong, Netflix’s animated musical comedy series ‘Centaurworld’ revolves around a homesick warhorse named Horse who accidentally finds herself in a fantastical world teeming with unusual creatures. She encounters a few of these edgy personalities who love to sing above anything else and attempts to find out a way home in their company.

However, Horse’s path is paved with challenges at every step, even worse than her previous experiences as a warhorse. Ever since its initial release on July 30, 2021, the show has captivated young minds and adults alike. This family-friendly series introduces interesting characters pitched against peppy music and a thought-provoking storyline which makes it universally palatable. So, if you’re looking for details about the release of the third season, we’d like to update you with the latest information about the same!

‘Centaurworld’ season 2 released in its entirety on December 7, 2021, on Netflix. The second season comprises eight episodes, with each one running for approximately half an hour.

As far as the third season is concerned, here’s everything we know. Netflix has not made an official announcement about the arrival of season 3. However, when the show was initially pitched to the streamer, it settled with a 20-episode order. Seasons 1 and 2 have a total of 18 episodes, which leaves two more episodes to go before the contract is fulfilled. So, it is difficult to ascertain whether the show will return for another season or a couple of special episodes.

The new kids animated series has been delivered by first-time showrunner Megan Nicole Dong, who is credited for her work as a story artist on DreamWorks Animation’s ‘How to Train Your Dragon 2’ and ‘Captain Underpants: The First Epic Movie’ before becoming the supervising director on Netflix’s ‘Pinky Malinky.’

Megan’s excitement before the second season rolled out was palpable enough to make us believe she might be interested in releasing more episodes. During the opening of ‘Centaurworld,’ it had joined an impressive lineup of Netflix original animated series including ‘City of Ghosts,’ ‘Kid Cosmic,’ ‘Battle Kitty,’ ‘Maya and the Three,’ and ‘Trash Truck.’

While the fate of ‘City of Ghosts’ and a few other shows is not known, ‘Kid Cosmic’ has been renewed for its third season, and ‘Maya and the Three’ has been dubbed as a miniseries. So, there is no set pattern that is followed by Netflix when it comes to its animated shows. Taking into consideration the varying trajectories of all the shows mentioned above, anything is possible as far as the future of ‘Centaurworld’ is concerned. In case ‘Centaurworld’ is greenlit for season 3 soon, we can expect new episodes to arrive soon, considering the short time gap between seasons 1 and 2. Hence, in all probability, ‘Centaurworld’ season 3 is expected to premiere sometime in Q2 2022.

Centaurworld Season 3 Plot: What can it be About?

In the season 2 finale of ‘Centaurworld,’ Horse dives into the Nowhere King’s mind and gets trapped there. Rider and Horse’s other friends fight to bring her back while Horse is taken to her past, where secrets are slowly revealed and the reality of her life presented to her. In the final moments of the season, Horse almost loses hope, but her friends find a way to bring her out of the darkness. As the second edition draws to a close, Horse finally begins to embrace her life.

The potential third season of ‘Centaurworld’ will most likely take Horse, Rider, and the others on another journey of adventure and soul-searching. With time, Horse has grown out of the feeling of homesickness and has become deeply attached to her new friends. So, we can expect to see more character development in the new season, if the show is recommissioned.