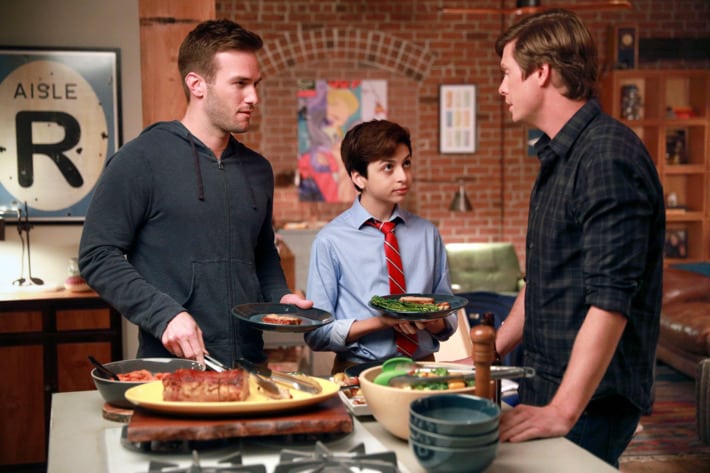 ‘Champions’ is an American comedy series that has been created by Charlie Grandy and Mindy Kaling who are best known for having collaborated on ‘The Mindy Project‘. Kaling also has a name for having lent her voice to notable films like ‘Despicable Me‘, ‘Wreck It Ralph’ and ‘Inside Out‘.

The show revolves around a guy who has the most enviable and laid back lifestyle that a bachelor could hope for. He lives with his younger brother in Brooklyn and leads a simple life which involves plenty of dates. However, all of this changes when an unexpected person from his past re-enters his life.

The show premiered on NBC on March 8, 2018. Contrary to expectations, the show did not really sit well with the audiences in terms of ratings, although critics appreciated it, saying, “Champions has a charming cast and good-natured approach to sensitive issues which make it a worthwhile watch”. Here’s everything we know about its future.

Champions Cast: Who is in it?

One of the first to be cast in ‘Champions’ was Mindy Kaling, who plays the role of Priya, Vince’s high school fling who has a child with him named Michael. Anders Holm plays the main character of Vince Cook, a gym owner. His easygoing life is turned upside down when his fifteen-year-old son moves in with him. Matthew Cook is played by Andy Favreau. He is Vince’s brother and they live together in Brooklyn. Matthew is an attractive young man, he is a little absent-minded.

Another important cast member is Fortune Feimster, who is seen as Ruby, a childhood friend of Vince and his brother, Matthew. Ruby is also a trainer at their gym.  Vince’s son, Micheal Prashant Patel is played by J.J. Totah. He is by far the funniest character in the show. He portrays the role of an ambitious and talented kid who pursues acting. Vince shares a complicated relationship with a trainer at the gym called Britney. This character is played by Mouzam Makkar.

There are several other recurring and guest characters, including Hasan Minhaj of Netflix’s ‘Patriot Act with Hasan Minhaj‘ fame. Here we see him play the part of Ro, Priya’s brother, and Michael’s uncle.

Read More in TV Preview: Pinky Malinky | America To Me

Champions Plot: What is it about?

The story revolves around Vince, a gym owner, who had his way with the ladies. He and his brother, Mathew, share an apartment in Brooklyn, New York, where they lead a life with no ambition, but lots of fun and frolic. With nothing much to do other than workout and have one-night stands, their lives take a turn when Priya, played by Kaling, drops a bomb on their doorsteps in the form of Vince’s teenage son, Michael, whom she conceived when she had a fling with Vince in high school.

What stands out about the show is the self-assured voice it has had right from the start. This is mostly due to the character of Michael who is a gay theater kid, and although he is not related to Mindy Kaling, his acting is so on point that viewers would believe that he could easily be her son. He is the cohesive force that holds the show together, and indeed he lords over his father and brother, almost like a tyrant, and is not afraid to use the fact that he has a different racial and sexual background, to his advantage. He is also not beyond guilt-tripping his father about not helping Priya out in raising him for fifteen years.

The show might be a little underdeveloped in the scenes concerning the dysfunctional gym employees and the way Matthew and Vince run it, but it manages to expertly tackle issues of race, gender, and sexuality in a refreshingly confident way. The Hollywood Reporter best surmised the show, saying, “It’s easy to admire Champions for its low-pressure progressive streak, which starts with its biracial gay teenage leading character and carries through the races, religions and sexual orientations of the other category with a “No big deal” shrug. It doesn’t ask to be hailed as important, but representationally it clearly is, a trait it shares with another of NBC’s Thursday shows, ‘Superstore‘.”

If the series does have an upcoming season, we sincerely hope it continues in a similar fashion because its tone is perfect as it has a gay person of color at the center, and does not use this to take on issues of homophobia head-on, but rather does it subtly, by contrasting how Michael and his father perceive the world, and how that gap can be bridged. The diverse cast of the show helps bring a lot of fresh perspectives to the table and they are packaged in a fascinating manner, although it might come across as a bit disjointed at times, ‘Champions’ has its heart in the right place.

Champions Season 2 Release Date: When will it premiere?

‘Champions’ Season 1 premiered on March 8, 2018. However, the show got off to a soft start, which might have prompted NBC to cancel it. The announcement was made on June 29, 2018. While there had been talks of Netflix picking up the show, there has been no news on that front as of yet. At this point, we are still pinning hopes on Netflix to pick up the show. If that happens, we will update you about ‘Champions’ Season 2 release date.