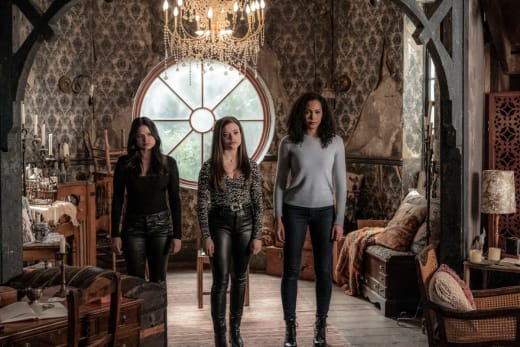 The CW’s fantasy drama, ‘Charmed’ season 3 returned with its second episode on January 31, 2021. The story follows the sisterhood as they grapple with their fate. It seems they face inevitable destruction as they face the Faction. On the other hand, Macy and Harry hold dividing views about a potential ally. That being said, we will come to the major reveals from episode 2 in our recap section. But before we move forward, let’s get ready for the much-awaited 3rd part. Read on to know all the details about ‘Charmed’ season 3 episode 3.

‘Charmed’ Season 3 Episode 3 is set to release on February 14, 2021, at 9 pm ET/PT and 8 pm CT on The CW. The third episode has been delayed because of the upcoming Super Bowl. Otherwise, new episodes thereafter should be aired on the channel every Sunday at the same time slot.

The CW describes episode 3 as follows: “The Charmed Ones (Melonie Diaz, Madeleine Mantock, and Sarah Jeffery) must come to terms with their romantic relationships as they face the greatest sacrifice of their lives. Also starring Rupert Evans, Jordan Donica, and Poppy Drayton. PJ Pesce directed the episode written by Liz Kruger and Craig Shapiro.” The upcoming episode is called ‘Triage.’ You can also watch its promo below:

If you have a cable connection, you can watch the third episode by tuning in to The CW at the above time slot. All the released episodes are additionally available on The CW’s official website and on The CW’s App. If you don’t have a cable connection, you can still watch the show on Amazon Prime Video or iTunes. For cord-cutters, live-streaming platforms include Fubo TV and YouTube TV.

In episode two, the sisters see Julian’s video and come to know that he is offering a reward for Macy. The sisters discuss their options. While Macy suggests the Clarion potion, Harry refuses to go ahead with her idea. The potion is supposed to make Julian believe that magic is not real. While Macy and Harry work on the concoction, Maggie and Mel ask Harry’s evil doppelgänger, Jimmy, what they can do to win against Julian. Macy and Harry understand that they require a siren’s tongue. They reach Ragnor Row, a place where anything magical is available and for sale. Mel is annoyed with Jimmy, but Maggie advises her not to do anything rash.

On the other hand, Harry and Mel are duped by a man, and Jordan learns that he needs to save a Tulipe witch or else he will face the repercussions. Jordan seeks Abigail’s help while Harry tells Macy that they cannot risk having a romantic relationship. Mel and Maggie promise Jimmy that they will release him if he helps them. Finally, they reach home and make the potion. Macy calls up Julian and feeds him the potion, and later, Jimmy and Abigail head off to find the witch. They successfully release the witch from the painting. Mel and Maggie give Jimmy the potion to hold up their end of the bargain. Julian is finally convinced to help them when he realizes that Liv is the real monster.