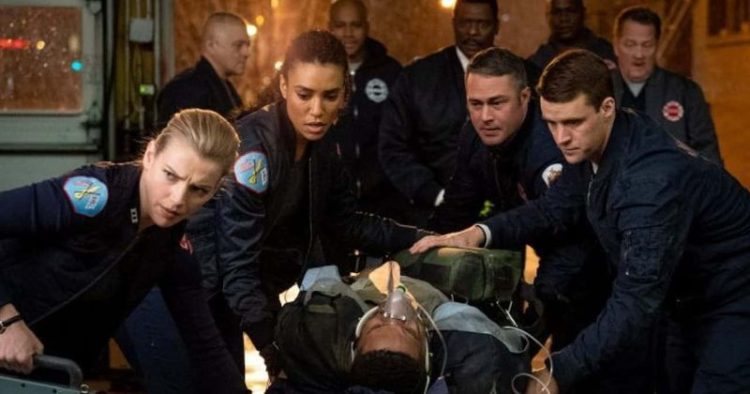 NBC could not have figured out a better way to keep the heat alive on Wednesday nights! With back-to-back episodes of ‘Chicago Med’, ‘Chicago Fire’, and ‘Chicago P.D‘, we cannot help but resort to bingeing away to this high-octane, three-hour weekly marathon.

In this article, let’s catch up on ‘Chicago Fire’, currently in its eighth season, which has managed to keep viewers on the edge of their seats since its launch. Following the overlap of duties between Chicago Firehouse 51 and 20, episode 10, that landed last week, resolves the crazy cliffhanger ending of episode 9.

This week’s episode 11 delves further into how the two teams from the different facilities clash more after they are forced to work together under the same roof. With the last episode done and dusted, let’s now guide you through how and where you can watch ‘Chicago Fire’ season 8 episode 12 while giving a brief of what you can expect from the upcoming episode.

Chicago Fire Season 8 Episode 12 Release Date: When Will It Premiere?

Here’s what to expect from the upcoming episode as per the official synopsis: “A series of false alarms at a private school hinders the firehouse’s ability to respond to legitimate emergency calls. Kidd asks for ideas to surprise Severide on his birthday. Cruz and Brett rent out their extra room, but the new tenant is more than they bargained for.”

Season 8 Episode 11 is called ‘Where We End Up’ and begins by following Stella who rejects a one night stand. Chief informs the team that he will be attending a seminar. The crew then receives news that a couple is trapped in a car whose hood has caught fire. Drake and Matthew arrive at the scene and pull out the victims — only to note that the man does not have a pulse.

After reaching the station, Kelly and Matthew convey to the Chief that Ladder 20 is again interfering in their functions. Later, they discover that the inhouse dog is suffering from bed bugs infection — because of which they need to evacuate and stay at Firehouse 20. Drake and Matthew display signs of a fight when the Chief arrives and one female from 20 extends hospitality to 51’s women crew, raising their doubts.

Chief meets an old friend Mike at the seminar, who discloses that he is suffering from cancer and has only six months to live. Later, another case regarding a fire at a drying cleaning facility crops up. The crew reaches the scene and manages to bring everyone to safety. Back at 20, Drake and Matthew reconcile while the Chief discusses how to protect themselves from health hazards.