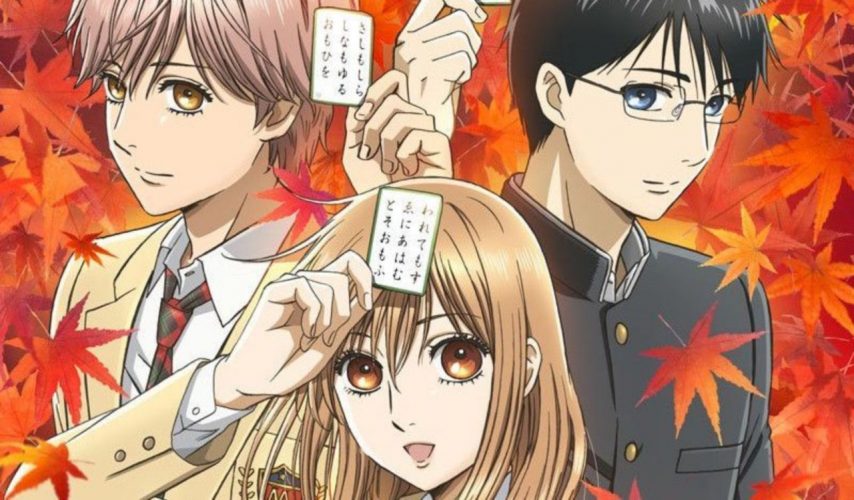 Chihayafuru is a Japanese romance anime series which is based on a manga series of the same name. Written and illustrated by  Yuki Suetsugu, the manga series was first published on December 28, 2007, and new volumes are being published to this day. A few years later, a Japanese anime studio called Madhouse announced plans to adapt the manga into an anime television series. Subsequently, Season 1 of the show premiered on October 5, 2011. It became an instant hit among fans of the source material and new viewers alike, prompting Madhouse to renew the show for a second season.

Season 2 of Chihayafuru then made its way to viewers’ screens on January 12, 2013, and was again praised by fans far and wide. In the years that followed since then, fans’ demands for a third season grew louder. Finally, in late 2018, their wish was granted when Madhouse announced that it had renewed Chihayafuru for a third season. Here’s everything you need to know about Chihayafuru season 3.

Chihayafuru Season 3 Release Date: When will it premiere?

Chihayafuru season 2 premiered on January 12, 2013 and ran till June 29, 2013. Subsequently, an original video animation (OVA) episode, titled Chihayafuru 2: Waga Miyo ni Furu Nagame Shima ni, was released on September 13, 2013, much to the delight of fans. However, as the years rolled by, the chances of a third season kept diminishing.

You can stream ‘Chihayafuru’ on HiDive and Crunchyroll with its original Japanese audio and English subtitles.

Chihayafuru revolves around a girl called Chihaya Ayase and her growing ambitions to become the best player in a card game called karuta.

Growing up in the shadow of her elder sister, Chihaya was always a reserved child despite being tomboyish and she never had dreams of her own. However, this all changed for her when she met a boy called Arata Wataya, who introduced her to a card game called karuta. Inspired by the classic Japanese anthology of Hundred Poets, karuta proved to be a mentally and physically demanding card game, which was like no other. Understandably, Chihaya soon got hooked to the game, and under the able guidance of Arata, who was a prodigy, she quickly learned the ropes of the game and started excelling in it. Together with Arata and her haughty but hard-working friend, Taichi Mashima, Chihaya joined the Shiranami Society as a child, hoping to make a career out of playing karuta. However, time and tide waits for no one, and as Chihaya started growing up, she got separated from Arata and Taichi, but her passion for karuta never faded.

Years later, when Chihaya joins high school, she is reunited with her childhood friend Taichi, who has not lost his passion for the game either. With hopes of diving back into the world of karuta, Chihaya and Taichi thus form the Municipal Mizusawa High Competitive Karuta Club, and soon find themselves playing karuta at a competitive level. As Chihaya gets back in touch with the game, she sets her sights on winning the national championship at Omi Jingu, and dreams of becoming the world’s best karuta player one day and reuniting with Arata, who started it all.

Chihaya Ayase: The main female protagonist of the show, Chihaya grows up in the shadow of her older sister with no aspirations of her own. However, her life takes a turn for the better when she meets a Arata, who introduces her to the world of karuta. While Chihaya spends much of her childhood improving her karuta game with Arata, she is heartbroken when they go their separate ways while growing up. As Chihaya matures, she grows into a beautiful girl in high school, but is still considered to be weird by most of her classmates, who often describe her as a “tomboy trapped in a supermodel’s body” and a “waste of beauty”.

However, Chihaya, who is known to be an extremely determined and strong-willed person, does not pay heed to these comments, and goes about her life. In high school, after she reunites with her childhood friend Taichi, Chihaya forms the Municipal Mizusawa High Competitive Karuta Club, and dreams of becoming the world’s best karuta player. Apart from her ambition to become the best, Chihaya also believes that by persevering in karuta, she will be reunited with Arata someday.

Taichi Mashima: Another main character in the show, Taichi hails from a wealthy and powerful family, and seems to be the perfect boy. Wealthy, handsome, smart, and charismatic, Taichi excels at pretty much anything he tries, which makes him a rather haughty person. However, he is also hardworking and honest, which makes him the voice of reason at the Municipal Mizusawa High Competitive Karuta Club. At the club, Taichi takes the responsibility of curbing the childish tendencies of Chihaya and other inexperienced members, but he can be extremely hard on himself when it comes to karuta games.

Arata Wataya: The final main character in the show, Arata is the childhood friend of Chihaya and Taichi, and is responsible for introducing them to the world of karuta. Being the grandchild of a master karuta player, Arata is familiar with the tricks of the game, and is shown to be a prodigy. Shortly after he introduces Chihaya to karuta, he fans her passion for the game by telling her that she has a special talent for it. After Arata gets separated from Chihaya and Taichi and returns to Fukui to take care of his sick grandfather, he slowly loses his passion for the game. The last straw comes when his grandfather dies, and following his death, Arata stops playing competitive karuta altogether. However, when Chihaya and Taichi visit him in Fukui, Arata regains his passion for the game and starts playing competitive karuta again.