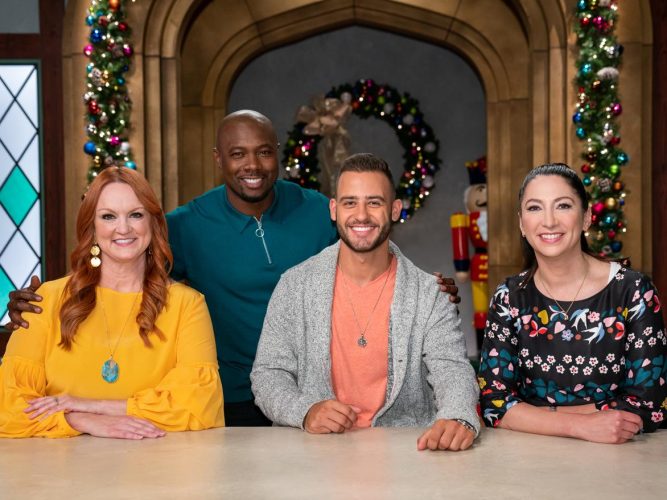 ‘Christmas Cookie Challenge’ is a reality TV series that presents us with a simple yet delectably interesting format. In each episode, the hosts challenge a bunch of top cookie makers to bake goodies and prove their skills to the audience. The series is judged by a panel of judges and they decide which baker gets a chance to win a $10,000 cash price.

Each round of the competition focuses on unique themes including 3D art, Christmas past and future, as well as ornaments. The bakers have to win each battle against their opponents to win the title of the best cookie baker in the country. Since it is a holiday-themed show, it has faithfully returned to its annual November slot since its launch in 2017. After spanning three seasons, the series is now all geared up to drop its 4th edition. And here is everything we know about it.

NOTE: ‘Christmas Cookie Challenge’ usually consists of eight episodes. However, season 4 had to be cut down by two episodes since, in the midst of filming, one of the crew members tested positive with the COVID-19 virus.

‘Christmas Cookie Challenge’ is co-hosted by Eddie Jackson and Ree Drummond. Jackson is the winner of the 11th edition of ‘Food Network Star’ and a former NFL player. He owns a food truck and is a private chef and personal trainer. The presenters also play a role in the final decision, accompanied by a guest judge (s) in each episode. Some of the guest judges featured in the fourth season include Gesine Prado and Jason Smith, among others.

We do understand people’s fondness for holiday cookies, which are not merely edible goodies. They serve as gifts, mementos of childhood, and are created with a lot of thought and pride. ‘Christmas Cookie Challenge’ follows five confident and daring bakers as they gear up to prove their baking prowess. The best chef is crowned as the holiday cookie master for the episode and s/he goes home with a $10,000 prize!

Season 4 stays true to the Christmas spirit as well. In one episode, the bakers curate interchangeable mix-and-match cookies, based on Christmas characters. They additionally craft 3-D cookie displays inspired by holiday music. The ingredients must evoke classic Christmas songs such as pears, figs, and chestnuts.

In another episode, the bakers celebrate “piece” on Earth as they create festive puzzle cookies. Later, they are tasked with making a 3-D, standing nutcracker doll — all out of cookies! The nutcrackers also need to have a modern touch, clad in crazy, different outfits — while being embedded with walnuts, pecans, or almonds.

In ‘Visions of Christmas’, the chefs use cookies to showcase their take on the future of Christmas. They also recreate the magic of unwrapping Christmas gifts by creating baked and breakable gift displays. Again, in ‘Homespun Christmas’, we see the contestants reviving old-school crafts by baking Christmas cross-stitch cookies. They are then tasked with decorating the cookies with lifelike embroidery patterns!