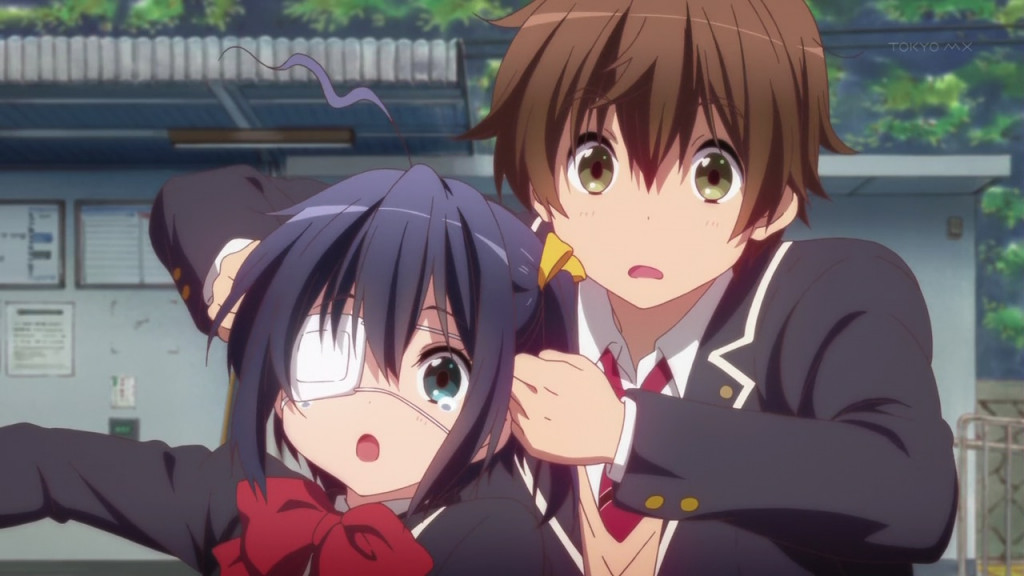 It’s ironic how many of us dream of being adults when we’re kids and as soon as we’re all grown up, we want to be kids all over again. But with time, we understand what adulthood is all about and we learn to accept it for all the independence, responsibilities and conformities. But some people never grow out of that stage and preach about “never growing up” and though it is necessary to lighten up a little sometimes, acting like a child when you’re all grown up can lead to some really embarrassing situations.

There is a strange term in the Japanese language known as “Chunnibyou”. This term is usually used for describing someone who manifests unusual delusional behavior, in particular, believing that one possesses supernatural powers. Now, this term is also referred to as the “Eighth-grade syndrome” because that’s the time when the “child to adult” transition takes place. But apart from eighth graders, there are also a few adults who exhibit the traits of “Chunnibyou”. ‘Chuunibyou demo Koi ga Shitai!’ is all about such individuals and the complications that this condition creates in their lives.

Clearly, the creativity behind the idea of the anime is commendable but it’s like one of those moments in life when you come up with a brilliant idea and when you put it down on paper, it does not turn out to be as good as you expected it to be. What starts off as a cute slice-of-life anime that revolves around the Chunnibyou lifestyle soon turns out to be a love story. Initially, like many others, I was very disappointed because I started watching it with a very different mindset, but then later I actually started enjoying this genuine romantic comedy anime.

I say “genuine” because more often than not, anime series are labeled as romance for nothing. A mecha anime where a curvy female lead falls for a badass protagonist who does not even care about her is not romance; even harem is an entirely different genre. Unlike most of these other anime that sneak their way into the romance genre, ‘Chuunibyou demo Koi ga Shitai!’ stays loyal to it throughout the series.

So to put it simply, if you’re looking for an anime that strictly belongs to the romance genre with a little bit of hit-or-miss comedy, then ‘Chuunibyou demo Koi ga Shitai!’ (also known as Love, Chunibyo & Other Delusions) will definitely not disappoint you. The storyline is not too out of the ordinary, but it’s the characters who outshine all the minor flaws that this love story has and not to mention, even the soundtracks are exceptional. I wouldn’t rank ‘Chuunibyou demo Koi ga Shitai!’ amongst the best anime of all time, but I’d still place it above all the average ones.

Chuunibyou Season 3 Release Date: When Will it Premiere?

Now instead of releasing another new season, the studio decided to give closure to this anime by releasing a movie version of it. The final movie titled ‘Eiga Chuunibyou demo Koi ga Shitai! Take On Me’ actually turned out to be better than the entire series. The ending of the anime movie is quite conclusive, so it is very less likely that we will see its return in any form. Our best guess is that in the unlikely scenario of the anime getting renewed, ‘Chuunibyou’ season 2 release date could be sometime in 2021 or later. We will update this section as soon as we hear more.

You can stream ‘Chuunibyou demo Koi ga Shitai!’ on Crunchyroll with its original Japanese audio and English subtitles.

Everyone goes through a stage during childhood where we wish we were superheroes of some kind and some of us even go as far as believing that we have superhuman abilities. Believing that you’ve descended from a fantasy realm is acceptable when you are a child but when you believe the same even after growing up, you will be labeled as a “Chuunibyou”. It is considered more or less of a disease that can often lead you to some very embarrassing situations.

Speaking of embarrassing situations, the protagonist, Yutta Togashi has had quite a lot of these because of his own past scarring experiences of being a “Chuunibyou”. His experiences have been so traumatizing that he decides to leave all of it behind and a start a new life in a school that’s far away from his previous one. For a long time, he posed to be the “Dark Flame Master”, only to realize that he suffers from a condition. But now, after leaving everything behind, he carves a new life with a fresh start.

However, his past comes back to him in the form of another girl who, just like him, is a “Chuunibyou” and poses to be the “Wicked Eye”. As much as he wants to be a normal school kid again, Yutta is forced to deal with more embarrassing situations even in the new school he goes to. But this time around, the outcome may not be all that bad after all. 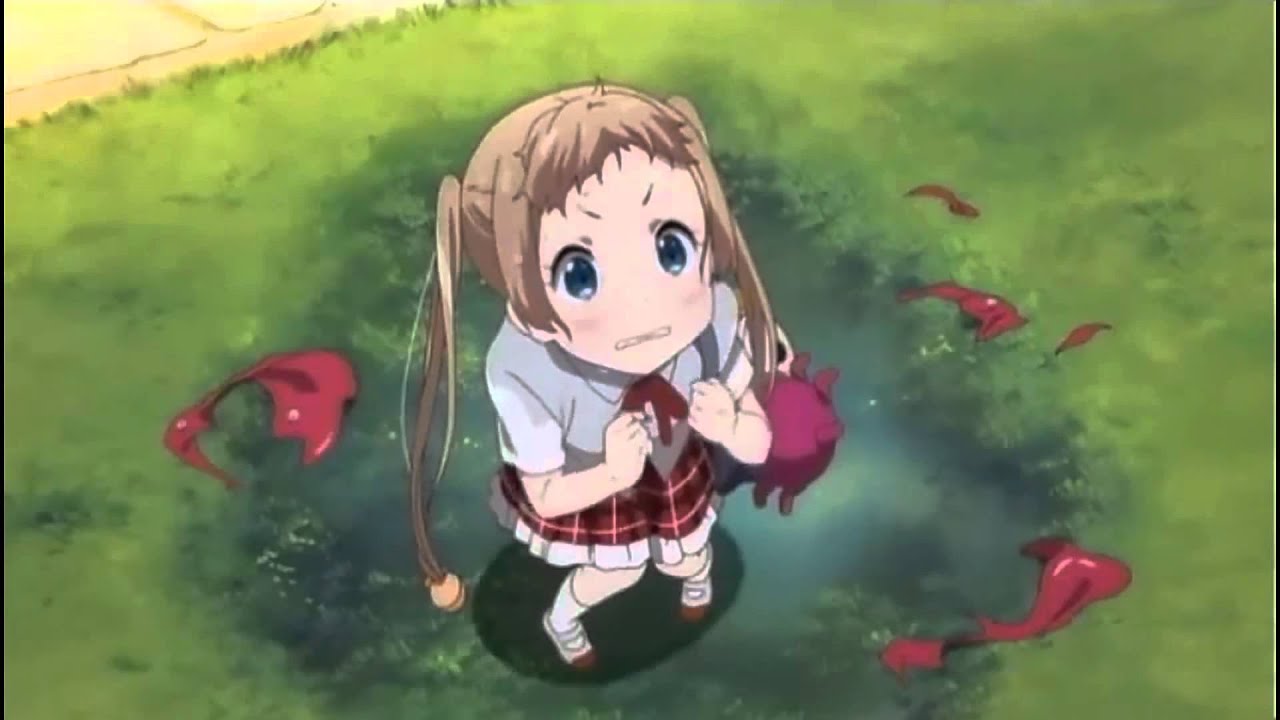 Sanae Dekomori is another patient of the “Eighth Grade Syndrome”, who has long pigtails with weights attached to each end. She claims that she uses these for the “Mighty Mjolnir Maul” for making men meet their morality. She meets Rikka online and they instantly connect as they still live in the fantasy world of their disease. Rikka hates drinking milk but she wants to grow taller and stronger, so she forces herself to chug it down all the time. Despite her delusions, she is a very bright student and has already finished off the entire syllabus of high-school mathematics. 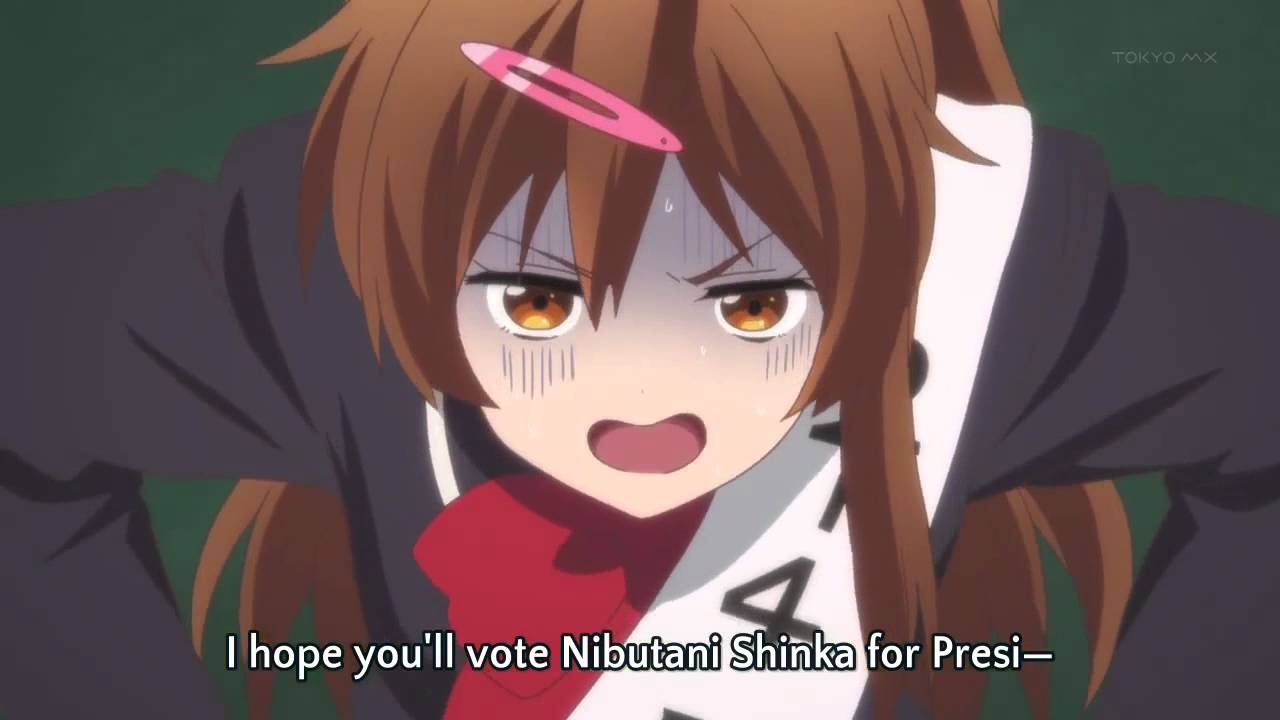 Shinka is extremely popular in school for her long list of talents and her attractive face. Many students of both genders worship her for who she is. She is also voted as the representative of the high-school. However, what she portrays on the outside is only to cover the remnants of her embarrassing Chuunibyou past. Unlike Yuuta, who is completely over his past disease, she still retains some aspects of her childhood fantasy and even has some items that she had collected as her alter ego, “Mori Summer”. 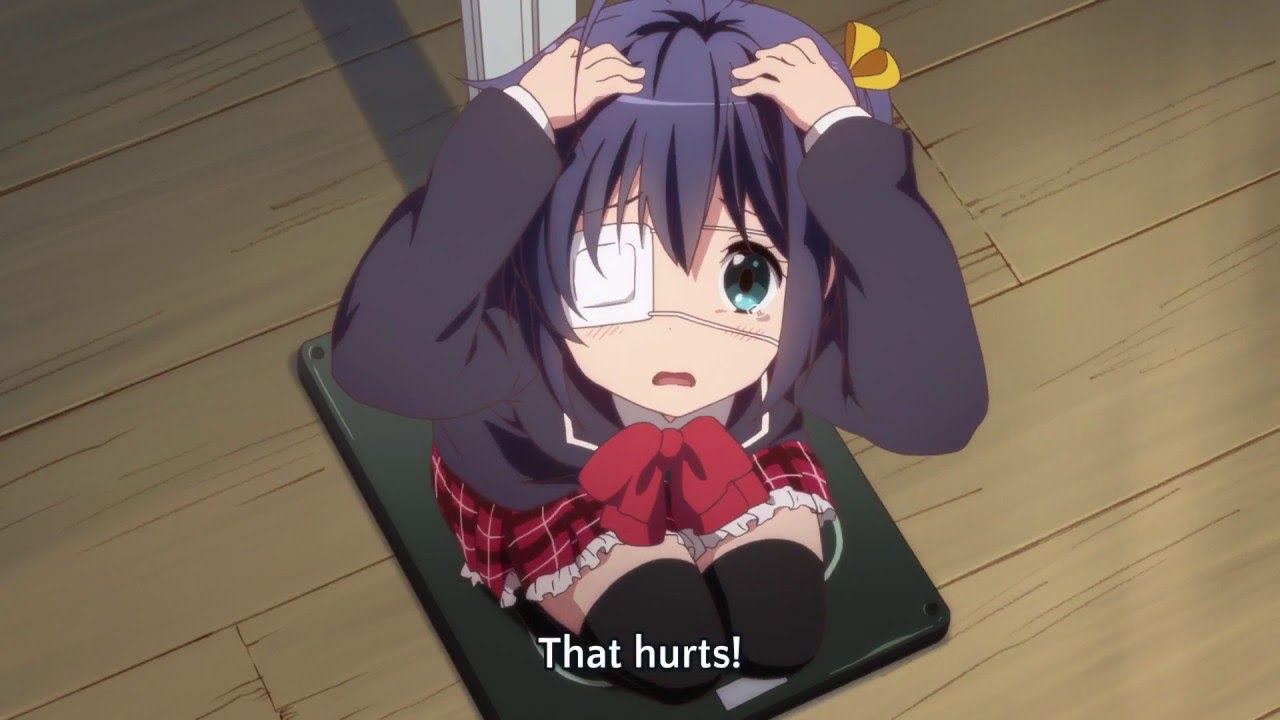 Rikka is the female protagonist of the anime who, unlike Yuuta, still suffers from the “Eighth Grade Syndrome”. She lives in a delusional world where she is a sorceress possessed by the “Tyrant’s Eye”. And to protect this “Tyrant’s Eye”, she wears an eyepatch over it all the time. She claims that her eye can reveal visions of one’s destiny and this delusion even reflects on her real-life feelings. She is the perfect example of a “Chunnibyou” because her case is as severe as it can get. 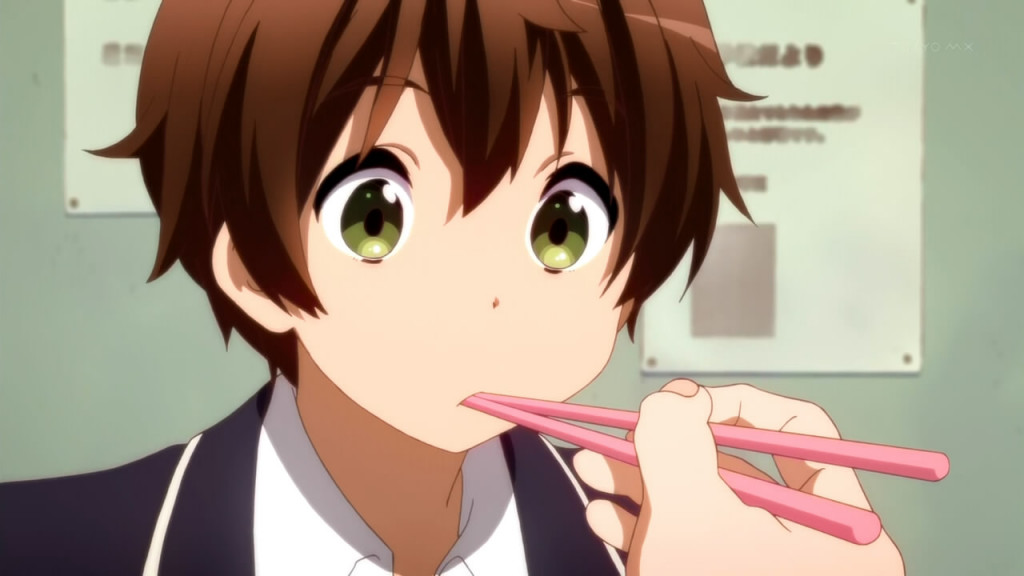 Yuuta is the main protagonist of the anime and was once a victim of the Chuunibyou disease. Back in primary school, he would walk around claiming to be the Dark Flame Master. But after a lot of embarrassment, he decides to leave that behind and start afresh as a normal person. Yuuta usually comes off as a very calm and friendly person but if someone ever dares to bring up his “Eighth Grade Syndrome”, he loses his cool and acts all aggressive. He hates being reminded of his dark past where he embarrassed himself and his family by doing all kinds of weird things, 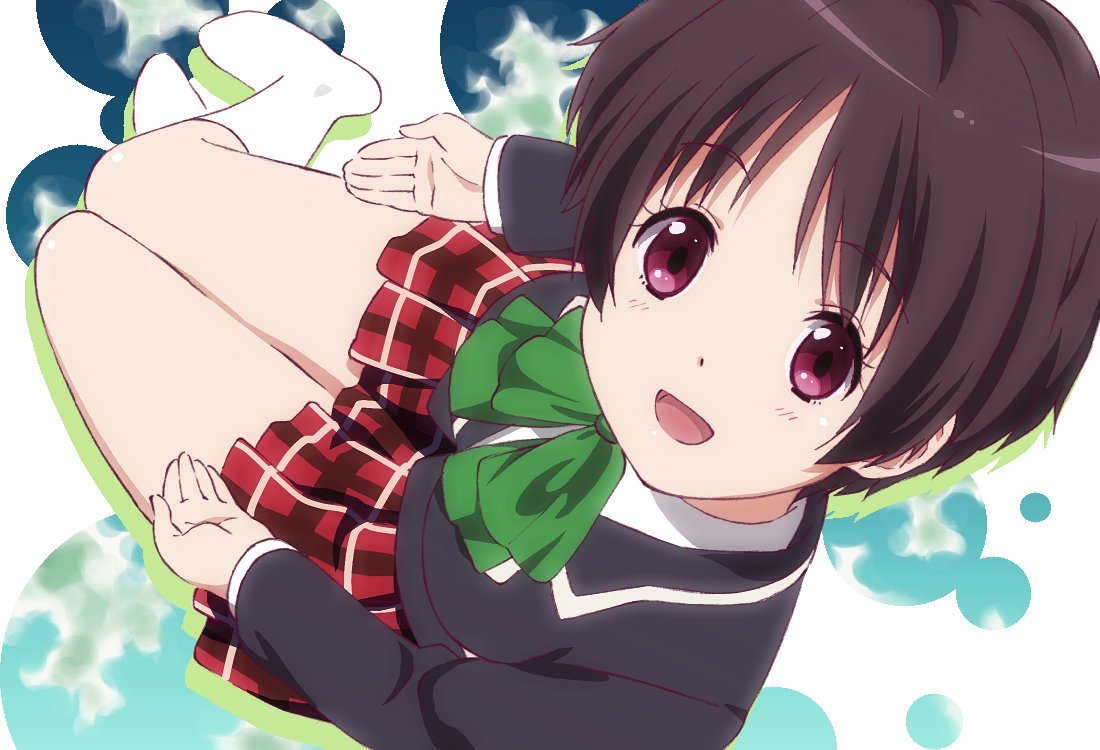 Kumin is the most laid back and naive character in the series, who enjoys taking naps. She even claims that napping is her only hobby. She takes her naps so seriously that she even starts a napping club at her school, which obviously no one joins. Her ignorance towards most things in school is probably the consequence of being homeschooled for a major part of her life. She is very pure at heart because of spending most of her childhood with her family. She always carries a pillow with her so that she can take a nap whenever necessary.