What is PBS’ Documentary ‘College Behind Bars’ About? 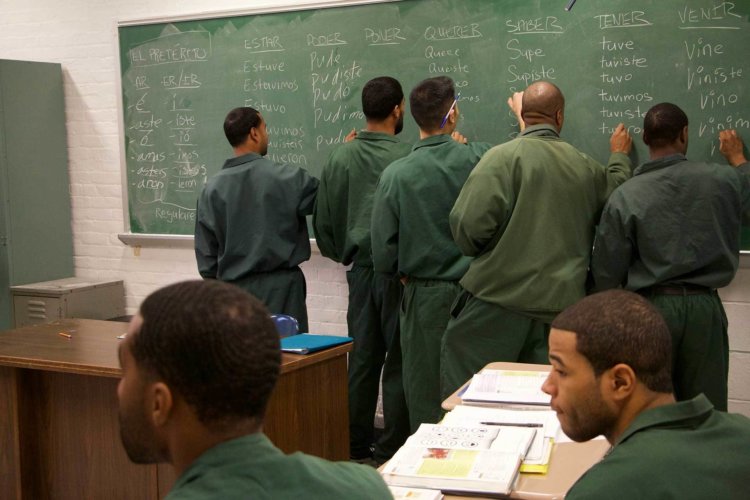 The Bard Prison Initiative, also abbreviated as BPI, is a liberal arts program that offers degrees to and is exclusively designed for incarcerated men and women in the United States. Launched in 2001, it gives admissions to around 300 imprisoned students spread across six New York State prisons. To date, BPI graduates have garnered more than 52,000 credits and over 550 Bard College degrees. Several alumni from BPI are currently in the field, giving back to the community and helping young people who are going through a difficult phase — just like they had, a few years back.

‘College Behind Bars’ narrates the novel efforts of the BPI and tells the stories of a small group of incarcerated youngsters in New York State prisons, who have vowed to give a better meaning to their lives by joining in the hard yet effective educational program. The prison documentary sheds light on the uncommon dynamics of the relationship between imprisonment and academics. It gives a humane face to people behind bars and lends insights on America’s criminal justice crisis.

The show also explores how human beings, even under the worst circumstances, still have scope for emotional, moral, and intellectual change. The documentary gives answers to some very important questions, “What is prison for? Who has access to educational opportunity? Who among us is capable of academic excellence?”

‘College Behind Bars’ is directed and produced by Lynn Novick, produced by Sarah Botstein, Salimah El-Amin, and Mariah Doran. It features Ken Burns as the executive producer. The series credits Skiff Mountain Films, Florentine Films and WETA-TV as its production companies.

College Behind Bars Cast: Who is in it?

‘College for prisoners’ is a sensitive series that focuses on the responsibilities of society. It tries to explain how we achieve redemption. Or how do we make up for the wrongs we committed in the past. How college helps us become civic beings. And how, with the help of education, we can prove that we are a part of community.

In order to answer these very questions, the show follows a small group of BPI students and tells their story through their words. They express how academics helped them to change their POV and gradually guided them in becoming better versions of themselves. Here is the story of one incarcerated individual about his journey with BPI:

“I got my GED on Riker’s Island 2005 when I was sixteen. And from that point until 2010, my mentality was very negatively focused. I thought I could go home and do crime better. Then, I got here and discovered, oh, they have college. I didn’t want to do it, but a friend forced me to apply to the program, which is the kindest, most loving thing anyone has ever done for me. Because who I am now is light years away from who I was then. I have to go home and I have to succeed. That’s the only way I’ll be able to redeem myself, in my eyes, in my family’s eyes, in society’s eyes. That’s the only way.”

College Behind Bars Plot: What is it about?

‘College Behind Bars’ is directed by Lynn Novick, a filmmaker who has been in the sphere of curating some of the best American history documentaries for over two decades now. A long-time partner to Ken Burns, the duo has, to date, created over 60 hours of programming, including a couple of the best documentary films and series. Some of them are ‘Prohibition’, ‘The Tenth Inning’, ‘The War’, ‘The Vietnam War‘, and ‘Ernest Hemingway’.

And with ‘College Behind Bars’ being the creation of this genius, award-winning filmmaker, we know that the documentary is spectacular in its own way. It is a prison show, no doubt, but it offers hope. The story follows a small group of incarcerated men and women, who are attempting to give meaning to their lives by earning a college degree.

‘College Behind Bars’ has been filmed for over four years in various maximum and medium security prisons in New York State. Spanning four hours, the four-part season 1 of the docuseries lends real-time insights into some of the vital issues plaguing modern society. It attempts to expose if we have been able to ensure rehabilitation for around two million people spending years in US prisons. Across the episodes, we meet the students and hear their personal experiences. We also get to meet their families and learn about the immense, positive potential of higher education.

College Behind Bars Release Date: When will it premiere?

‘College Behind Bars’ premiered on November 25, 2019 at 9/8c on PBS. The first season of the show comprises four episodes. Each episode spans a run-time of 60 minutes and the series wraps up on November 26, 2019.

Since the show is a documentary conceived as a miniseries, it is unlikely ‘College Behind Bars’ season 2 will ever happen.

You can watch the official extended trailer for ‘College Behind Bars’ season 1 below. For additional clips, images, and sneak peeks, you can also head to the show’s official website.