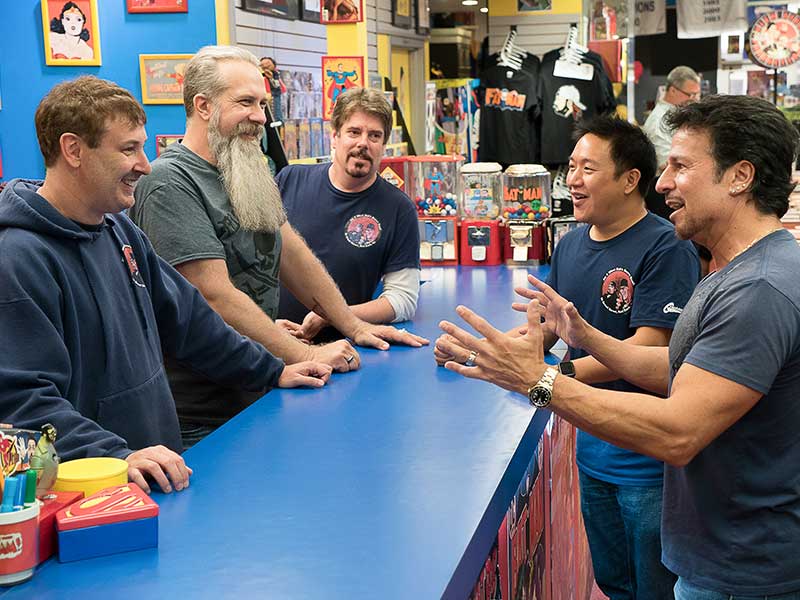 It has become increasingly difficult to find a genuinely good and refreshing show in the paraphernalia of the twenty-first century big bads of the reality TV scene, such as Bravo’s Real(?) Housewives franchise (we have lost count of how many spinoffs it has spawned), or the actually innumerable indirect spinoffs that the success of the 1999 Dutch Big Brother formula had inspired. The general ebb and flow of reality TV now is between the semi-scripted, isolated, and cutthroat competitive scenes, and the mindless flamboyance and kvetching of posh pin-up girls and bachelors  – or so it would have been, had it not been for the objectively half-decent shows like Pawn Stars.

While far from its focal area of content, History TV’s long-running ‘Pawn Stars’ has been an important show in many ways, not just because of its unprecedented success, but because of the family-business or startup-based actual reality TV it paved. There are many of these shows cropping up for half a decade now – but as with all things pop culture, many of these lose the intrigue after a couple of seasons because they do not manage to create their own unique personality. ‘Comic Book Men’ is the exemplary paradigm in this regard by just being ‘a show with a personality.’ For one thing, we have not really seen many shows based on comic book shops. Moreover, Jay and Silent Bob’s Secret Stash (the store featured in the show) is the proverbial hornet’s nest of New Jersey in terms of fame – much of it to do with Kevin Smith’s involvement.

Comic Book Men Plot: What is it about?

The show features the iconic comic book store of Red Bank, Jay and Silent Bob’s Secret Stash, and follows its crew for an all-too-familiar world of comics, and its fair measure of fanboy culture. The show also has featured some of the biggest figures in the comic book and movies world – including Stan Lee himself. Sadly, we will not get to experience another season of this comic world joyride, as the show has been canceled sitting on seven seasons.

Comic Book Men is in many ways the spiritual successor of the Pawn Stars formula; it has both the signature world-famous store and a colorful ensemble cast of shopkeepers who run it. A merchandise and comic book store with the names of Kevin Smith and Jason Mewes name pinned on it is nothing to scoff at, and obviously enough, the show stars these celebrity shopkeepers in the lead roles. This is a team of five: Kevin Smith, Walter Flanagan, Ming Chen, Bryan Johnson, and Mike Zapcic; they are celebrities in the sense that their name precedes the show’s reputation and not vice versa. The leading figure is, of course, Kevin Smith, the actor, producer, and seasoned comic book writer, with writing gigs, landed for major titles from both DC and Marvel (e.g., Batman: The Widening Gyre, and Spiderman/Black Cat: The Evil That Men Do).

As Kevin Smith himself confirmed in a tweet on 24th June 2018, “After 96 episodes, the [Comic Book Men] are now the Cancelled Book Men.” The show will not be picked up for an eighth season – not by AMC, at any rate. We will not be seeing another season anytime soon if ever. Here’s to hoping that it picks up more interest in syndication and reruns until Kevin Smith eventually pitches the show to new potential affiliates, and it gets adopted by another network.

With season 8 dropped from the slates of AMC for the foreseeable future, we will not be seeing much of Comic Book Men except in syndication. Naturally, the tentative season will not be filmed, and there are no trailers or teasers for it either. What you can do for now instead is savor the show as it is now, starting from this sneak peek of the show featuring the recently departed Stan Lee (R.I.P).