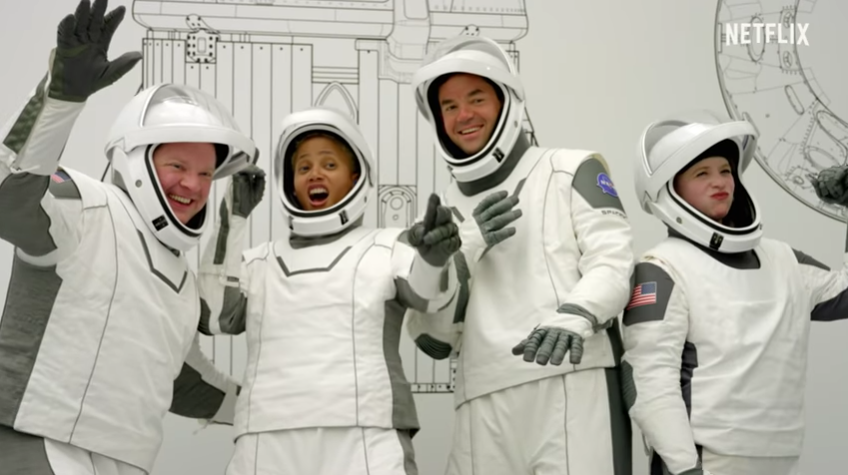 As the title suggests, Netflix’s ‘Countdown: Inspiration4 Mission to Space,’ is an intriguing limited series that explores SpaceX’s Crew Dragon capsule Inspiration4 mission (or Inspirati④n) almost in real-time. This spaceflight will be the first all-civilian mission as the crew orbits Earth from nearly 80 miles above the International Space Station for three days.

Each of the four squad members symbolizes a unique quality, which they believe will motivate others, hence the mission name. So now that we have met them – Jared Isaacman (leadership), Hayley Arceneaux (hope), Chris Sembroski (generosity), and Dr. Sian Proctor (prosperity) – let’s find out what’s in store for episode 3, shall we?

‘Countdown: Inspiration4 Mission to Space’ Episode 3 is all set to release on Netflix on September 13, 2021, at midnight PT or 3 a.m. ET, precisely a week after the first two chapters aired at once on the platform. Following this pattern, episode 3’s premiere is combined right alongside episode 4’s. The lift-off of Inspiration4 will be a live event on Netflix YouTube; thus, the finale, episode 5, is set to be presented to us at the end of this month — September 30, 2021. Each installment is roughly 45-minutes-long and will provide us with enthralling details about space and the crew’s journey.

Where to Watch Countdown: Inspiration4 Mission to Space Episode 3 Online?

Since ‘Countdown: Inspiration4 Mission to Space’ is a Netflix original, the easiest and most feasible way to watch it is on the streaming platform via a subscription. Sadly, the service no longer offers a free trial period in the United States, so you will have to spend money if you wish to catch up on Episode 3 of this limited show, along with any other you wish to watch, as and when they air. You can use Netflix on your smartphone, tablet, laptop, and desktop, along with any other compatible streaming device like Apple TV, Amazon Fire TV, AirTV, Chromecast, and many more.

‘Countdown: Inspiration4 Mission to Space’ Episode 3 is bound to pick up from where Episode 2 left off — with Jared Isaacman, Hayley Arceneaux, Chris Sembroski, and Dr. Sian Proctor coming together and preparing to go to outer space. Now that the introductions have been made and the crew has realized what they have to do on-board SpaceX’s Crew Dragon Resilience capsule, they will train for their experience.

Apart from pressure testing and undergoing every possible emergency drill and mission stimulation, they will learn about orbital mechanics and zero-gravity environments, all the while facing their fears. In other words, the four of them will absorb the technical aspects of how to be commercial astronauts in Episode 3. SpaceX will provide them with every opportunity to succeed, and they only have to prove themselves before the launch.

Read More: What is the Inspiration4 Launch Date?