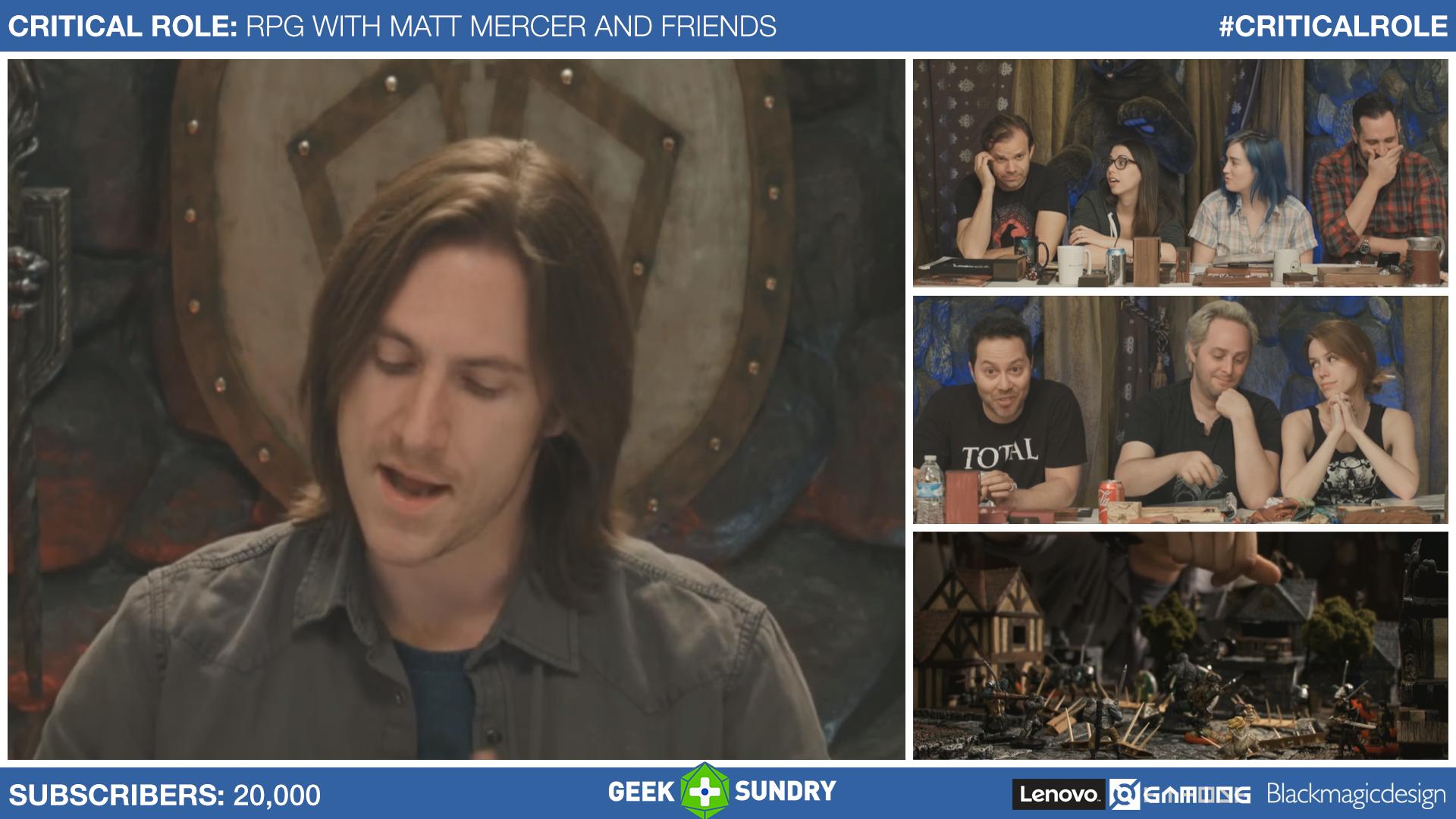 ‘Critical Role’ is an American web series based on the fantasy tabletop role-playing game ‘Dungeons and Dragons’, also known as ‘D&D. It is a show where a group of voice actors play the game as each one of them indulge in role-playing and embark on different adventures.

The tabletop game D&D was originally designed by Gary Gygax and Dave Arneson and was published for the very first time back in 1974 by Tactical Studies Rules, Inc. ‘D&D’ departed from traditional war games to introduce the style where each player could come up with their own characters who could, in turn, experience their own adventures. There is a Dungeon Master who takes up the role of the referee and storyteller and maintains the setting of the adventures. The other characters or inhabitants interact with one another, go into battles, and gather treasures. As a result of their activities, they also gather experience points.

‘Critical Role’ airs on show’s own channel on Twitch.  The video-on-demand, i.e. VOD’s, are put up on the official website and also on their YouTube channel for the fans. The show first aired on March 12, 2015.

Critical Role Cast: Who is in it?

The cast of the show is led by Matthew Mercer, who developed the show as well as plays Dungeon master. Mercer is known for his works in anime, cartoons and video games. He has lent voices for anime such as ‘Attack on Titan’, ‘Fate/Zero’, ‘Jojo’s Bizarre Adventure’, to name a few. He has also worked in video games such as ‘Resident Evil’, ‘Titanfall 2’, ‘Overwatch’.

Initially, the show had a cast of nine voice actors for the first 27 episodes but after that, the number has remained eight. Along with Mercer, there is Ashley Johnson, Laura Bailey, Liam O’Brien, Marisha Ray, Sam Reigel, Taliesin Jaffe, and Travis Willingham. The show has had appearances by guest stars as well. Marisha Ray happens to be the creative director of the franchise.

Critical Role Plot: What is it about?

In ‘Critical Role’, a storyline is usually spread over a campaign containing many story arcs. And each of the stories is played over many episodes. Along with the main story arcs, the characters have the option of either taking breaks or exploring other side missions. Every character has a backstory of their own which are either complete or not and the state of their backstories influences their dynamics in the main story arc. ‘Critical Role’ has so far had two broad campaigns that are both located in Exandria, which is a fictional world that has been created by the Dungeon Master.

The first campaign follows the exploits of Vox Machina, an adventuring party. and takes place in Tal’Dorei which is a continent in Exandria.

The first campaign has the following story arcs. Episodes 1-16 consists of the Kraghammer story arc. It takes place in ‘Underdark’ and a battle between Vox Machina and the beholder K’Varn ensue. Episodes 17-23 is the Vasselheim story arc where the party splits into two teams and takes up dangerous missions to prove their worth to a local adventurer’s guild. The rest of the campaign consists of several other story arcs.

Campaign two, which started airing from January 11, 2018, is about the exploits of the adventuring party called The Mighty Nein. Set 20 years prior to the last battle of the Vox Machina, the events take place in the continent of Wildemount. Here again, the Trostenwald/Alfield story arc, which spans from episode 1-7, tells the background story of the new adventuring party. Episodes 8-18 consists of the Zadash story arc where Mighty Nein has their exploits in the city of Zadash.

The Northward arc spread across episodes 19-31 takes The Mighty Nein to two missions entrusted upon them by the Gentleman. First, they go to a place in the west called Berleben. There they look into a smuggler’s safe house that had been abandoned. In their second adventure, they go outside the city limits to help out a friend of the Gentleman in the city of lawlessness called the Shady  Creek Run. There are some other story arcs in the second campaign as well.

Critical Role Campaign 2 Release Date: When will it premiere?

Critical Role campaign 1 premiered on March 14, 2015. Right from its first season, ‘Critical Role’ has been a huge hit. Millions of viewers have been glued to the show and the fan base is only increasing. The fans of the show now have the nickname and are called “Critters”. The American video games website, Polygon has called ‘Critical Role’ to be a truly modern show. Along with that, the cast of ‘Critical Role’ has started becoming regulars at the comic con.

Why watch the trailer when you can actually check out the full episodes on YouTube. Head over to the Critical Role official YouTube channel to check out all episodes of the previous seasons.