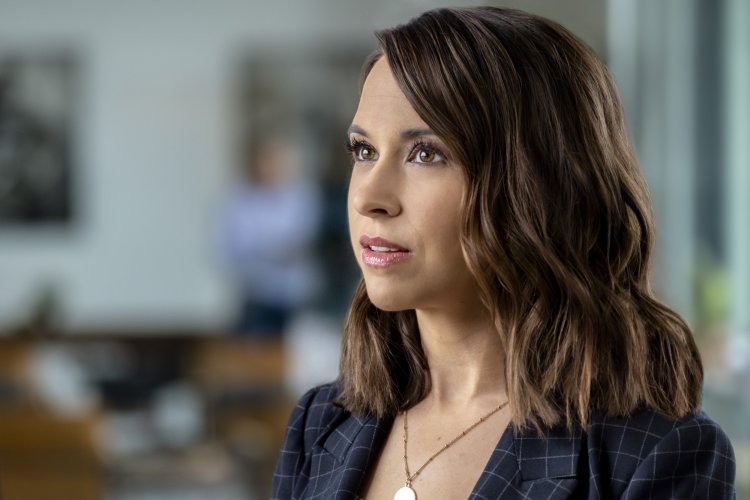 ‘Crossword Mysteries: Terminal Descent’ is a Hallmark movie that follows Tess, a crossword puzzle editor, who tackles a challenge against a new supercomputer known as BB. But the brilliant CEO of XCal Technologies, who created the supercomputer program, dies, and Tess is subsequently roped into the investigation surrounding his death. In the process, she encounters Detective O’Connor, who she is often at odds with, as they try to solve the case together. The movie is one of Hallmark’s ‘Crossword Mysteries’ series, which has been thrilling the audiences since its inception. If you’re looking for more information about the film, we’ve got you covered.

‘Crossword Mysteries: Terminal Descent’ started filming on October 27, 2020, and wrapped up production on November 15, 2020. The movie was shot in the heart of Canada’s most aesthetic city, Vancouver, in British Columbia. Let’s dive into specific details.

‘Crossword Mysteries: Terminal Descent’ was filmed in Vancouver, British Columbia. The city dominates the country’s forest and tourism industry, but apart from that, its history of hosting movie and TV show productions has been remarkable. With its mix of historical museums and natural scenery, the city exhibits an indomitable aesthetic preferred by filmmakers and photographers in general. 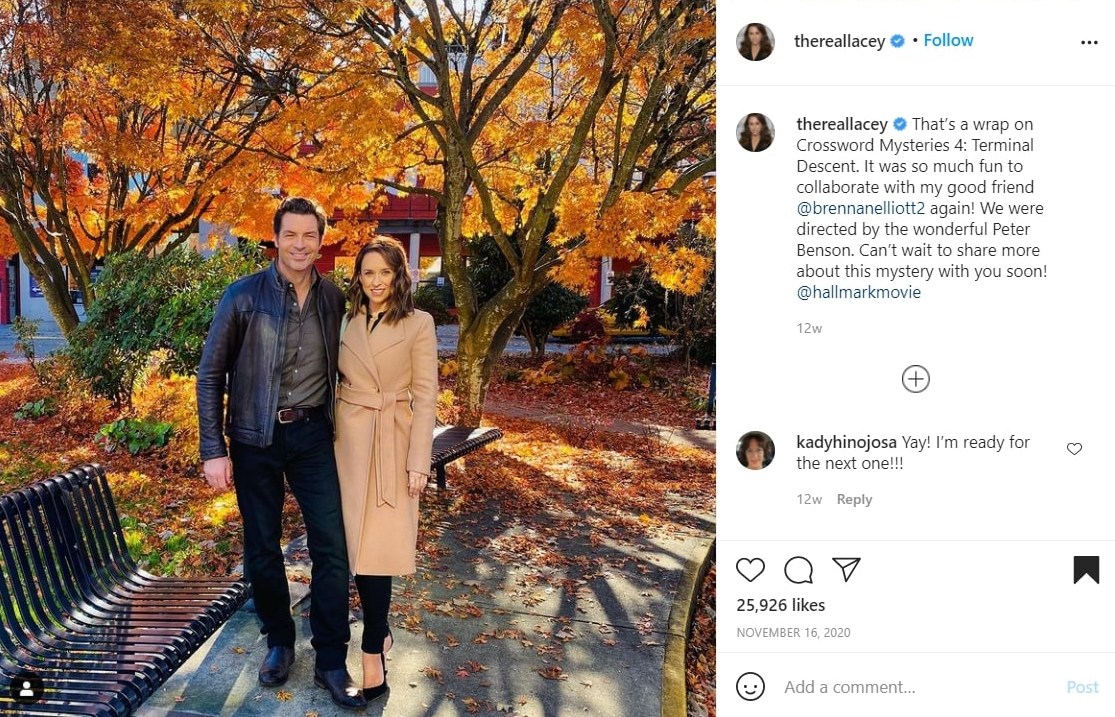 Movies like ‘Deadpool,’ ‘War for the Planet of the Apes,’ ‘Apollo 18,’ ‘Percy Jackson: Sea of Monsters’ were filmed there. Stanley Park, The Vancouver Art Gallery, and even the University of British Columbia are some places that have majorly served as filming locations for various movies and shows. During the filming of ‘Crossword Mysteries: Terminal Descent,’ actor Lacey Chabert shared pictures with co-star Brennan Elliott, with whom she had a good bond on set.

Brennan was equally thrilled to have filmed in the city. He jotted down his experiences on Instagram, calling it “crazy fun.” He seemed very excited to have been a part of the process and further took great joy in sharing his work with the world. 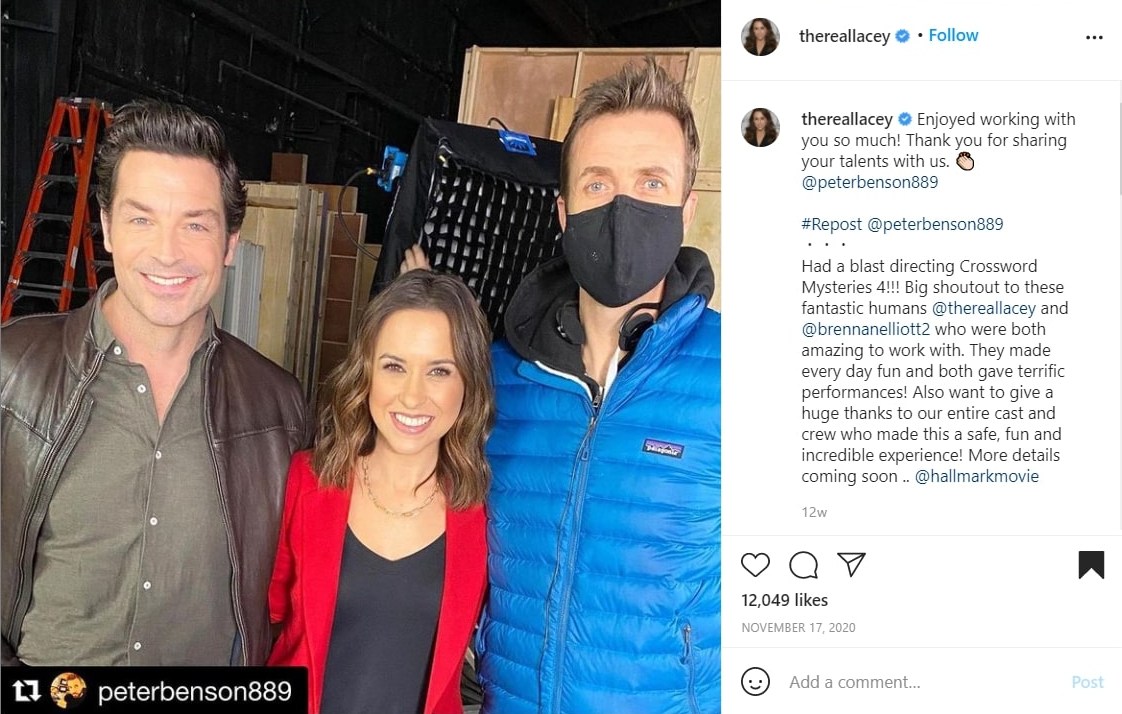 The cast of ‘Crossword Mysteries: Terminal Descent’ is led by ‘Mean Girls‘ Star Lacey Chabert, who plays Tess, a nerdy crossword puzzles editor. She is best known for her roles in ‘Lost in Space,’ ‘Penny Robinson,’ and ‘Not Another Teen Movie.’ Brennan Elliott portrays Logan, a self-assured detective investigating a death. You may recognize him from ‘UnREAL,’  ‘Night at the Museum: Secret of the Tomb,’ and ‘Curse of Chucky.’

Actor and producer Barbara Niven essays the role of Aunt Candace. Her previous works include ‘Chesapeake Shores,’ ‘A Perfect Ending,’ and ‘The Rat Pack.’ Other cast members include Brandi Alexander as Viv Banks, Bradley Stryker as Eric Ogden, Matthew James Dowden as Paul Redford, and many more.

Is Crossword Mysteries: Terminal Descent Based on a True Story?

Shortz is the only person in the world to hold a college degree in Enigmatology, interpreted as the study of puzzles, which might explain his desire to create a series of Hallmark movies surrounding the same premise. Other than his passion for puzzles, it is said that he enjoys movies, reading, and collecting antique puzzle books and magazines. His movies sure seem like a productive use of his talents and interests.

The coinage of the term “Enigmatology” is credited to Will Shortz himself, and he generically uses the term to refer to someone involved in the science of puzzles of any kind, be they mathematical, word-based, or logic-oriented. Tess in ‘Crossword Mysteries: Terminal Descent’ can be called an enigmatologist. Another fictional character that resonates with Tess more or less happens to be Alan Turing (Benedict Cumberbatch) from ‘The Imitation Game.’

The movie is roughly inspired by the real-life story of Alan Turing, who cracked the Enigma code used by the German armed forces to send messages securely. Hence, ‘Crossword Mysteries: Terminal Descent’ is a movie that can be seen as reality portrayed creatively. Although it is not based on a real-life incident, the essence of the film would appeal to puzzle-lovers all over the world.