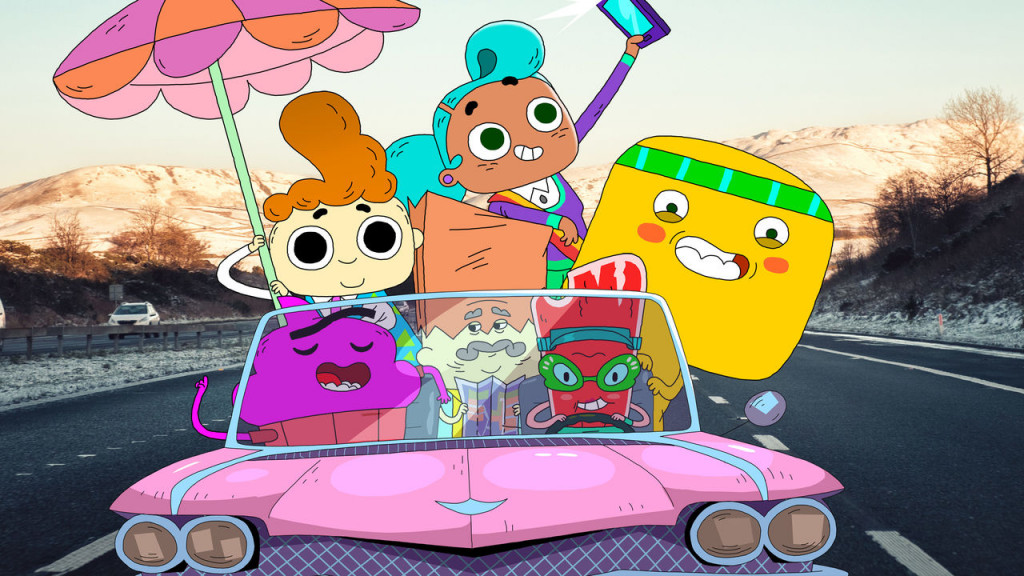 ‘Cupcake & Dino: General Services’ is a Canadian-Brazilian animated series created and directed by Pedro Eboli that airs on Netflix.  The show is produced by Birdo Studio (Brazil), Entertainment One (Canada), and Atomic Cartoons. Eboli himself, along with Olivier Dumont, Randi Yaffa, Luciana Eguti, and Mark Satterthwaite are the executive producers of the show. The famous Brazilian cartoon show ‘Oswaldo’ is also Eboli’s brainchild which he later sold to Cartoon Network Latin America. The show first premiered on Netflix in July 2018.

Netflix has slowly started getting a stronghold on original animated shows, the first of which was ‘BoJack Horseman’. Other original animated shows Netflix has come up with include ‘F is for Family‘, ‘Castlevania‘, and ‘Big Mouth‘. Due to many streaming services now clouding the market, it is essential for Netflix to keep coming out with interesting original shows for all age groups to retain their clientele.

The story of ‘Cupcake & Dino: General Services’ centers around an anthropomorphic cupcake and its dinosaur brother. Each episode focuses on two separate adventures they undertake while working for the General Services. This type of work is basically odd jobs and the humor or adventure in the series generally stems from the oddity of the job or the client.

Cupcake & Dino Cast: Who is in it?

The main characters of the show are the two brothers Cupcake and Dino. Cupcake is a pink colored pastry and the de facto leader of the duo. Though he is just a tiny cupcake compared to his brother who is a dinosaur, he has a Napoleon complex that makes him the tougher one of the two. The character of Cupcake is voiced by Justin Collette. On the other hand, Dino is a warm, optimistic, and good-natured individual who loves having fun all the time. Comedian, actor, and voice actor Mark Little is the one who voices Dino. He is also the writer of several episodes of the show.

Besides these two major characters, other recurring characters include Hugo, the assistant of the duo and the one who receives their calls and informs them of the new gigs they procure from General Services, Uncle Chance (voiced by Kyle Dooley), their uncle in whose store they work while not busy with their General Services commitments, and Mayor Vicky (voiced by Julie Sype), the mayor of Big City, the town where they live. Cupcake and Dino also have a grandmother called Grandma Steak, who is an actual living, breathing piece of cooked meat. Both Uncle Chance and the two leading characters also have rivals in their businesses. Uncle Chance owns a general store, and his rival is called Sneaky Stan. Cupcake and Dino’s rival is Peetree Gluck the Third. Peetree is a large rooster, even bigger than Dino. He is a bully, and keeps boasting around about how macho and manly he is, and sometimes even takes away General Services jobs Cupcake and Dino can get otherwise.

Cupcake & Dino: General Services Plot: What is it about?

The stories of ‘Cupcake & Dino’ revolve around the various adventures the two friends take part in while doing their General Services job. Both of them are really fond of this industry and want to make a name for themselves here. They are far more interested in this job than looking after their uncle’s store. And this General Services job is the source of adventure in their lives. Here sometimes they need to look after a sentient house, sometimes they have to deal with space travelers or fight against giant mustaches, and so on. These adventures are mainly absurdist, but like all shows which are meant for children, there are certain moral lessons which can be learned from each of their adventures.

The set of supporting characters only add to the fun and complexity of their adventures. Sometimes, Mayor Vicky herself gives them tasks to complete, like looking for a thief who has stolen a valuable statue during Big City’s Cupcake Day gala. The two brothers, besides being fond of adventure, are also willing to lend a helping hand to whoever is in need. Thus, they decide to become pizza delivery professionals to help keep their favorite pizza place’s business afloat. On another occasion, Cupcake and Dino also help in rescuing a mythical creature called the Manygoose after it gets sold to a traveling circus.

The animation in the series is a throwback to older shows where hand-drawn cartoons were mainly used. Bright and vibrant colors fill up the palate and keep the children hooked to the screen. The humor, besides the absurdist conditions the protagonists find themselves in, also stems from the brilliant use of wordplay.

After much speculation, Cupcake & Dino Season 2 premiered on May 3, 2019, on Netflix. A perfect fun-filled animated show for kids, Cupcake & Dino has received praise from everyone.

Considering the good reception of the show, we  expect Netflix to renew it for another season. Our best guess is that if the show does get renewed, Cupcake & Dino Season 3 can release sometime in May 2020. We will update this section as soon as we hear more.