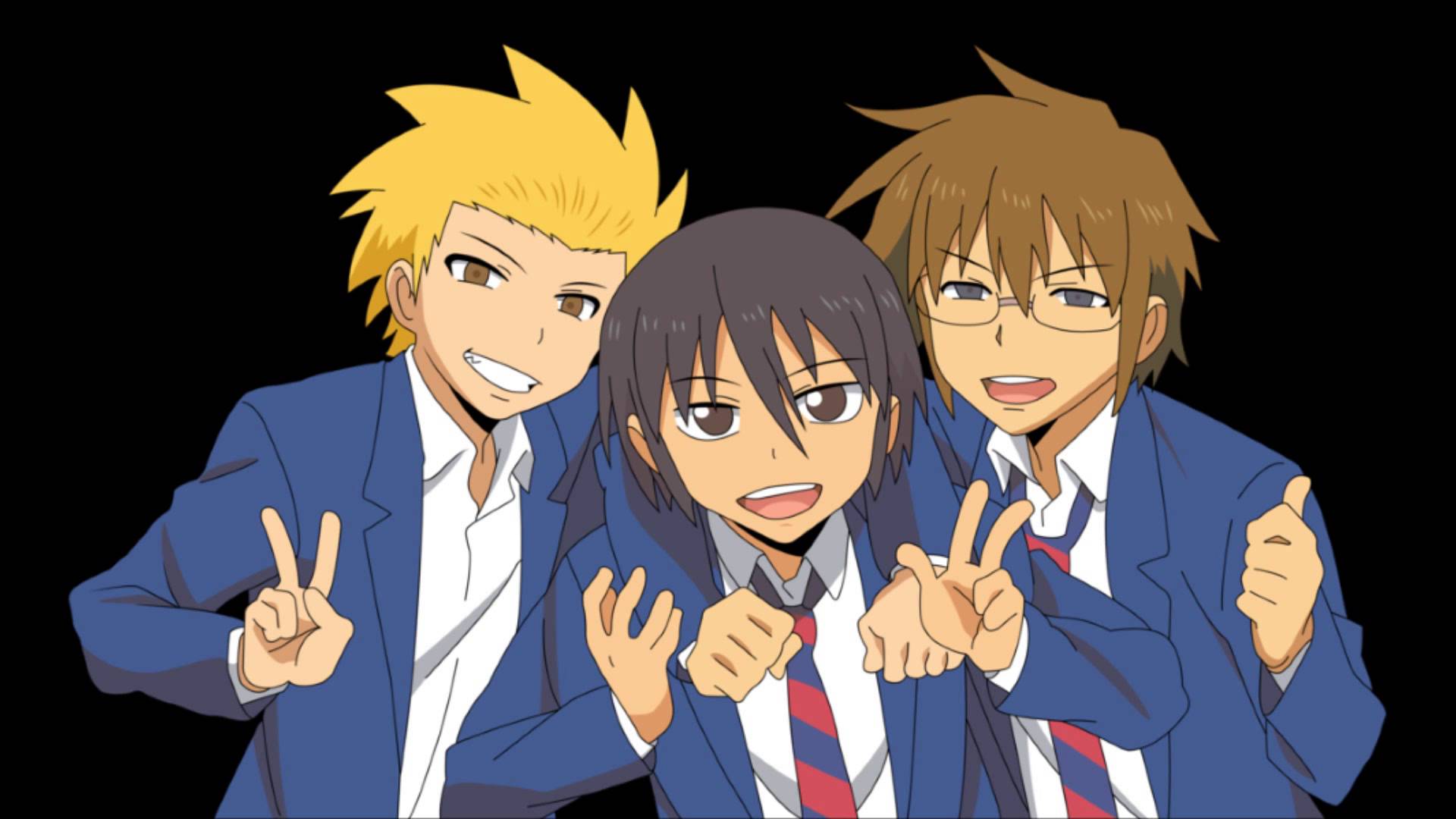 ‘Danshi Koukousei no Nichijou’, also known more commonly as ‘Daily Lives of High School Boys’, is a Japanese manga series written and illustrated by Yasunobu Yamauchi. It was first published by Square Enix on 21st May, 2009 in ‘Gangan Online’ and continued till 27th September, 2012 producing a total of 7 volumes. The series was adapted into an anime by Shinji Takamatsu, who both directed and wrote the scripts for it. The anime series was produced by Sunrise and started airing on 9th January, 2012 on TV Tokyo in Japan. The series was later picked up by other popular channels such as Bandai Channel, TVA and AT-X while also streaming it online on Niconico.

Niconico also streamed various special episodes on their online website prior to the actual screening of the show which acted as promotional material for the series. These were later compiled along with the actual series and released on six separate Blu-ray and DVD collections between the 3rd of April and the 4th of September, 2012. The series is presently licensed by NIS America who only released it with its own original Japanese audio along with English subtitles in North America on July 31st, 2013.

Later that year, the series was picked up by Hulu who started streaming it on their online website. A live-action film was also announced that same year by Showgate who revealed that the cast would include Masaki Suda (playing the role of Tadakuni), Ryo Yoshizawa (as Hidenori) and Shūhei Nomura (as Yoshitake).

Danshi Koukousei no Nichijou Season 2 Release Date: When will it premiere?

Danshi Koukousei no Nichijou season 1 released on October 12, 2013 to mixed reviews. It’s been over 6 years that we haven’t heard from Square Enix on this one, so it’s really hard to tell. As things stand at the moment though, it seems highly unlikely that we will receive a season 2 for it. Now, don’t get us wrong here. We would really like this one to be revived as it is one of the few anime that actually make you laugh randomly. It is one of those shows that you put on to instantly feel better and it really does what it sets out to do. Therefore, I would definitely not want it to rot in the general anime limbo that a lot of modern shows suffer from but given as things stand at the moment, it is really hard to justify the production of a second season.

To be honest, the first one didn’t manage to sell well and considering the cost that goes behind producing these shows, it’s really hard to pitch the same to the producers for a second time. Secondly, the anime has been adapted from the manga and while it did skip a few chapters here and there, most of the source material has already been used up. Therefore, unless Yamauchi decides to revive the original manga series, the chances for a second season of the anime are quite bleak. Still, there is no harm in keeping our hopes up and eyes open for further developments and we promise to update you as soon as we come to know about Danshi Koukousei no Nichijou season 2 release date.

There are no English dubs for the anime presently available but the original series with Japanese audio and English subtitles can be streamed online on Crunchyroll.

The entire plot of ‘Danshi Koukousei no Nichijou’ revolves around a high school called Sanada North Boys High school and its various students. The anime is a hilarious take on the antics of teenage boys who are only now learning about the various important aspects of life. It is also the age of awakening and exploration and the series tries to highlight the same through the various interactions between the students.

The main protagonist of the story is Tadakuni and his group of friends, namely Hidenori Tabata and Yoshitake Tanaka. Tadakuni is a typical high school student who is constantly pulled into the wild activities planned by the other two. Hidenori is the main plotter of the group and has the uncanny ability to come up with a ‘fun’ activity for the group to do daily. Yoshitake, although sometimes skeptical, usually goes along with it just to annoy Tadakuni, who is left voted out. He is then forced to tag along with the group and take part in the activity planned out by Hidenori. The anime goes on to portray the challenges faced by the various students in understanding, realizing and fully communicating their feelings to one and other, often leading to hilarious consequences.

Tadakuni: A paranormal fanatic and a part time worker at a pizza restaurant, Tadakuni is also a student at the Sanada North Boys High School alongside Hidenori and Yoshitake. Despite being a paranormal fanatic and talking about ghost stories all day at school, most of his friends know that he actually makes them up. He also has a younger sister who is stronger than him, both physically and mentally, and will usually ride over him all the time. As a result, he really tries to maintain his distance from her, barely speaking unless absolutely necessary.

He is also more reserved than everyone else in the group and mostly finds himself getting into trouble because of the antics of the others. He desperately tries to put a stop to the wild plans conjured up by Hidenori and Yoshitake but fails miserably and eventually tags along with them. However, he finds out that trouble usually follows the group around whenever the duo come up with these plans and hence tries to avoid them. This leads to him having the least amount of screentime compared to others despite being introduced as the protagonist of the show. The producers insisted that they wanted to only portray the ‘fun’ parts of the anime and frankly, Tadakuni was getting in their way and hence, they decided to reduce his screentime drastically in the second half of the first season.

Yoshitake Tanaka: The main ‘cool’ guy of the group, Yoshitake usually decides to go along with the wild plans concocted by Hidenori, much to the anger and disapproval of Tadakuni. He is mostly amused with the results than the actual events that take place since getting on Tadakuni’s nerves is one of his strong points. He has a violent sister back home who doesn’t spare a chance to annoy and irritate him, resulting in him spending most of the time away from his home and adventuring with the trio. He is also known as Rubber Shooter, a reference that will increasingly become clear as you watch through the first half of the anime. He is also shown to have a tough childhood, often being made fun of by others.

Hidenori Tabata: A short-sighted, glass-wearing student of the same school as Yoshitake and Tadakuni, Hidenori is the mastermind behind the ingenious plans that always land the group in trouble. Reckless and hopelessly optimistic, Hidenorri is responsible for convincing the trio to take part in his ambitious plans, most of which would backfire right from the very beginning. These schemes can be called crazy at best and lunatic at worst, and Tadakuni often tries to escape from the trio in order to not land himself in any more trouble. This results in Hidenori and Yoshitaka taking the front row in the show while Tadakuni is pushed back to the role of a supporting character despite being highly active in the manga. Hidenori is also shown to have a tough childhood as he was often bullied by his classmates, which might very well explain the reckless behavior later on in his life.