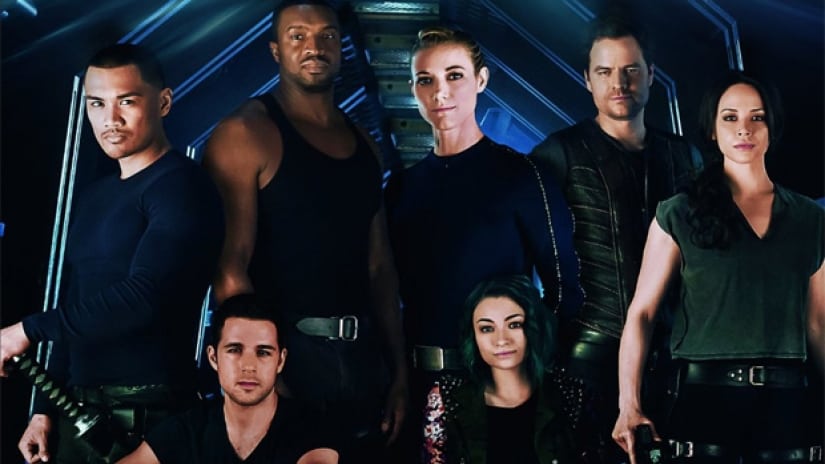 ‘Dark Matter’ is a science fiction space opera that airs on the Space Channel and SyFy. The show first premiered on June 12, 2015. If you are a fan of the genre, perhaps you are familiar with the comics of the same name, created by Joseph Mallozzi and Paul Mullie, who are also famous for ‘Stargate‘. Since Joseph and Paul are also creators of the show, they know the universe they are dealing with and can maintain continuity within the story effortlessly.

Interestingly, the show borrows its name from the matter that is made of yet unrecognized subatomic particles, which accounts for 85% of all matter in the universe. Anyhow, the premise of the show itself is based on six people who wake up in a deserted spaceship, suffering from amnesia. Set in a dystopic 27th century, the members must get along with each other, if they are to survive, and uncover the truth about their identities, while being assisted by a female android.

While the show has received mixed reviews from critics, it is definitely worth checking out for the impressive character arcs it spins over the course of the seasons.

Dark Matter Cast: Who is in it?

The main characters of ‘Dark Matter’ are the ones on the spaceship. They are just known by the numbers, in the order that they woke up in. Thus we have Marc Bendavid as One/Jace Corso/Derrick Moss, Melissa O’Neil as Two/Rebecca/Portia Lin, Anthony Lemke as Three/Marcus Boone/Titch, Alex Mallari Jr. as Four/Ryo Tetsuda/Ryo Ishida, Jodelle Ferland as Five/Das/Emily Kilburn and Roger Cross as Six/Griffin Jones/Lt. KalVarrick. Zoie Palmer of ‘Lost Girl’ and ‘Pure‘ fame appears as the Android.

However, coming back to our main cast members, they broadly fall under reliable character tropes that we have seen in science fiction before. Thus, One is the moral compass, Two is the diplomatic leader, Three is the sarcastic trigger happy member, Four has a deadly demeanor, Five has the gift or curse of visions, while Six is the loyal member of the group. The Android is like a zippier and better, not to mention friendlier, version of the Google Assistant that we use, and helps the group navigate their ship in various perilous situations.

Dark Matter Plot: What is it about?

‘Dark Matter’ starts with a group of six people who find themselves on Raza, a spaceship, suffering from amnesia. They get together trying to uncover the mystery. As the story progresses, we see them make headway onto different planets, trying to get to the bottom of the mystery.

This is where the show brings in its sci-fi elements and in true fashion ties it to our society’s workings. In the course of the group’s investigation, there are talks of big corporations across the universe whose greed leads to poor people ending up paying the price. They also seem to have mercenaries on hand to send and execute those who stand in their way. The show soon takes a turn towards a lot of action as this group battles these corporations and their henchmen. The henchmen are basically faceless drones that are very reminiscent of the Storm Troopers in ‘Star Wars‘.

The highlight of this series, however, is not the sci-fi elements, it is the human bond that characters share with each other. The members of the group cannot rely on a lot of technology (most likely due to the show’s limited budget), and thus the narrative ensures that they rely on their skills and each other. The cohesion among the group members forms much of the content that we see. Obviously, they have the Android for help, but it is their resourcefulness and skillset that actually saves them from truly perilous situations.

Thematically, ‘Dark Matter’ does not do much to break out of the mold of sci-fi content, but it raises some psychological and philosophical questions. For example, the members who awaken are different people than who they were before, which raises the question that can they break the chain and become entirely new people, or are they destined to be a slightly different version of who they were since their character traits entered them and solidified a long time ago. While it tackles these quandaries, the show takes on a more meaningful tone and direction.

Collider has summed the show well, saying, “Early into its journey, ‘Dark Matter’ is purely exploratory. It introduces its characters and gives a brief sketch of its world, but doesn’t (yet) give a sense of where it’s heading. A number of mysterious objects on the ship will surely add up to something eventually, but the biggest question at hand is who wiped the crew’s memories, and why. ‘Dark Matter’ creates enough intrigue and does so stylishly enough so far, that its other problems can be overlooked for now. Like its crew, ‘Dark Matter’ has the opportunity to potentially erase some of the sins of sci-fi (and Syfy) series past, and become something better.”

‘Dark Matter’ Season 3 premiered on June 9, 2017. Soon after the third season, SyFy canceled the show. While the show did see a dip in ratings, it still performed better than a lot of other SyFy shows which have been renewed. Thus, the cancelation of ‘Dark Matter’ came as a shock to fans. However, the creator, Mallozzi, took time out to explain the reasons. Firstly, it was not a network original causing problems in monetization, and secondly, there was a plan to make it a ‘Stargate’ crossover, but actors’ contracts were up by then.

It does not seem like ‘Dark Matter’ Season 4 will happen unless someone other network picks this show up. We really hope that does happen because this show-runners did have a definite ending in mind and Season 4 was supposed to be the final season.

While we wait for any positive news on ‘Dark Matter’ season 4, check out season 3 trailer below. If you have not seen the series, and enjoy good sci-fi, we strongly recommend that you give it a watch.