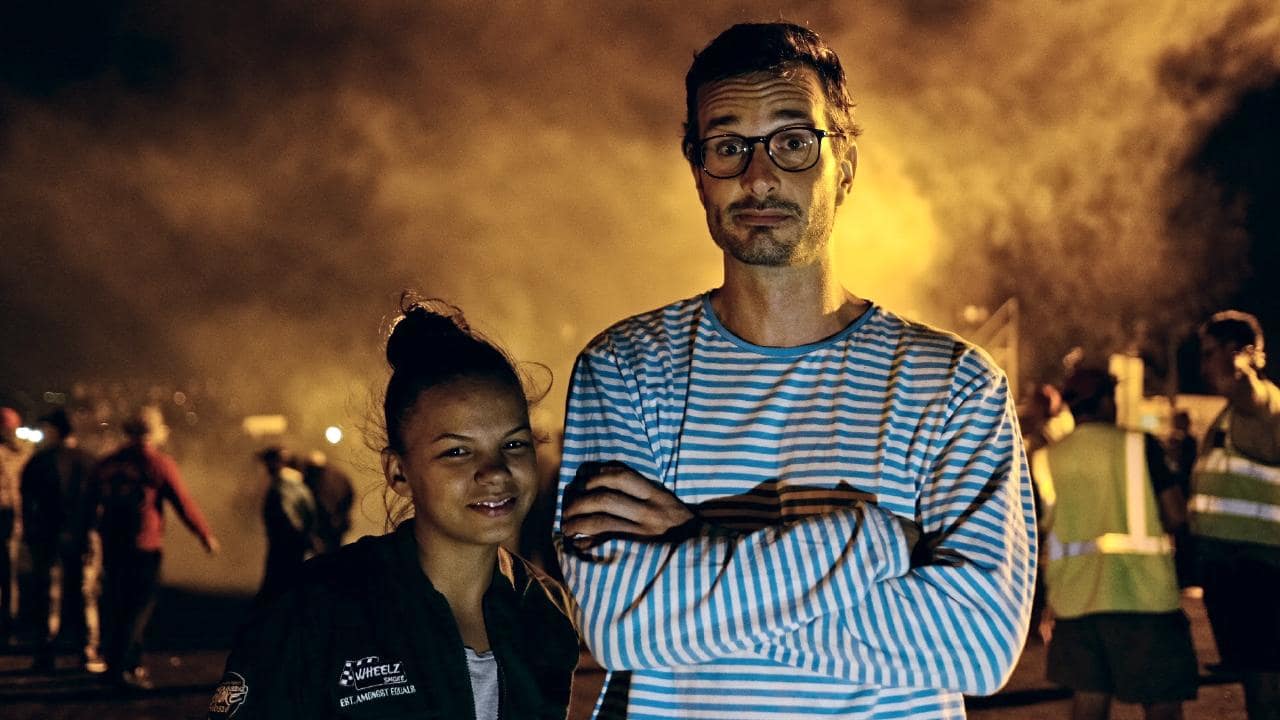 Who doesn’t like to travel to new places? Who doesn’t have a little explorer in the back of their head, demanding them to pack their bags and venture out into the world? No one. And sometimes, that is also a problem. So many people travelling to the same place makes it crowded and beats half the purpose of the reason you took that vacation. Such scenarios make travellers think about other options, about the roads less travelled, and that’s what makes them come up with ideas like dark tourism.

If you are someone who likes to travel to the places that aren’t usually flocked by people from all over the world, you might want to give it a try. But let me warn you, it is not for everyone. ‘Dark Tourist’ gives you an idea of what you’ll be getting yourself into. Written by David Farrier and Paul Horan, it is executive produced by Carthew Neal (‘Hunt for Wilderpeople’), Mark McNeil, and Farrier himself.  Neal and Farrier have previously collaborated on another documentary, ‘Tickled’.

Dark Tourist Cast: Who’s in it?

Since this is a travel show, the only fixed cast is its presenter. There are no partners for him as he travels to some of the most dangerous places in the world. Here is an introduction of the person to whom the audience of the show gives almost 7-8 hours of their life.

‘Dark Tourist’ is presented by New Zealand journalist, David Farrier. He has been a prominent part of news and journalism in the country, and through some of his exemplary works, he has made a name for himself internationally. Starting out on 3News and later working as an entertainment reporter, Farrier soon took to serious journalism and began to focus on all sorts of stories, no matter how mildly interested the others in his field would be in it. He started making documentaries, the earliest of whom was ‘God Save New Zealand’, named after one of the national anthems of the country. He co-hosted a couple of shows on television, before turning back to make documentaries. His next project came in the form of ‘Tickled’, which focused on exposing the true nature behind the wave of “competitive endurance tickling” on the Internet.

Farrier and his co-director, Dylan Reeve, received threats against their endeavour. But that didn’t stop them from completing the project. Neither did it dissuade him from tackling other issues that could prove fatal to him. One of his articles covered the issue of sexual predators tricking children into making videos for them. This led to an enquiry which resulted in the shut down of various websites. He has been involved in some ground-breaking projects and this is what increases the anticipation for ‘Dark Tourist’.

Dark Tourist Plot: What’s it about?

When we think about travelling to someplace, our first thought is to visit the most popular spots, see what the fuss is all about. However, every place has its history, some darker than others, and there is a form of travelling that indulges the type of people who are fascinated by death and destruction. Sounds a bit creepy? Well, that’s dark tourism for you! In ‘Dark Tourist’, Farrier brings out the dark tourist in himself and travels those places of the world that still carry the scars of the tragedies that befell them. His first stop is in Colombia, and if there is one thing that this country is famous for more than any other thing, it is Pablo Escobar! If you loved ‘Narcos’, then you should watch this episode at least.

Farrier travels to Medellin and is actually shown around by one of Escobar’s henchmen. But that’s not the only thing he does. He also tries out a mock run of illegally entering the USA through Mexico. In Japan, he travels to Hiroshima and Nagasaki to test out the effects of radiation. In case you don’t know, there is a practice in certain travellers who visit this place just to “soak in” the radiation. In the US, he explores the backgrounds of personalities like Jeffery Dahmer and Charles Manson.

The assassination of JFK and the vampire lore in New Orleans also become the topic of discussion. In another episode, he travels to Kazakhstan to explore Soviet Union’s ambitious feats like nuclear weaponry and space programs. In Europe, he indulges himself in mock wars, visit the museum dedicated to serial killers, and talks to the most violent prisoner in Britain, among other things. However, not all of his efforts are successful. For example, he tries to into places like Gates of Hell and a walled-off ghost city but meets with resistance from the people in charge of the places. Turns out, there are some places that are out of the reach of travellers of all kind.

Dark Tourist Season 2 Release Date: When will it premiere?

‘Dark Tourist’ season 1 premiered on July 20, 2018. The show received a bag of mixed response. While some considered Farrier’s efforts commendable, especially for bringing something exciting to the genre of travel documentaries, there were others who didn’t like him furthering the cause of dark tourism. The ethical bounds of going to such places, and that too for pleasure, isn’t considered exhilarating to everyone. There was also the critique for the show not having brought anything revelatory or ground-breaking through its work.

Despite the divided critique, the audience gave a more positive response to the show. It was certainly educational because there are a lot of things that not everyone might know about. Although Netflix hasn’t officially ordered the second season of the show, Farrier seems excited about the prospects. The world is a big place and eight episodes are not enough to cover all the dark and weird things that Farrier has in mind. Our best guess is that if the show does get renewed, ‘Dark Tourist’ season 2 can release sometime in 2020. We will update this section as soon as we hear more.

If you are one of those people with the travel bug, then ‘Dark Tourist’ is one of the must-watch shows for you. You can catch all of its episodes on Netflix. Here is a glimpse of the first season.