Where to Stream Dave Chappelle’s 8:46 Special? 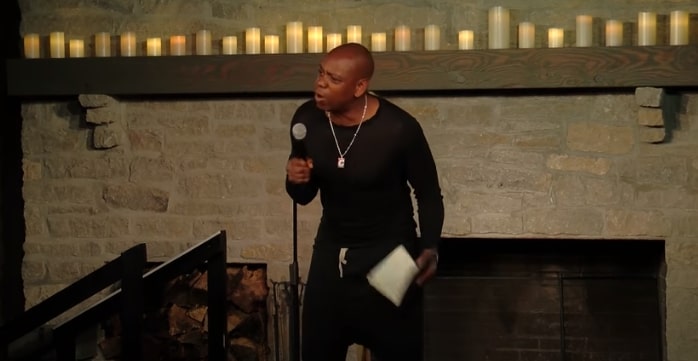 Dave Chappelle is known for his comedic sense and has won adequate plaudits and recognition for the same. However, he has now been compelled to speak out despite the lockdown in this surprising special ‘8:46.’ Like several Americans, especially people of color, Chappelle expresses his horror at the systemic racism that is still prevalent in the country. Accordingly, he does not hold back in the special. Timely and scathing, this is not an act you’d want to miss. So, where can you stream ‘8:46’? We’ll tell you that after walking you briefly through the premise.

‘8:46’ is the amount of time George Floyd lay on the ground until he died tragically while in the custody of the Minneapolis Police Department. Naturally, his death has sparked several protests and galvanized the Black Lives Matter movement. Chappelle uses the platform to launch a scathing attack on the government, law enforcement officials, and racists, who are creating resistance to the protests seeking justice for George.

Chappelle has spoken out about police brutality before, but this time it is more topical as he sets about exploring the race relations in America. Without ruining the jokes, let us just say, that there are shootouts to the LGBT community, the young protestors, and everybody fighting an oppressive regime.

Dave Chappelle’s ‘8:46’ has technically been released as a Netflix special, so one would expect the standup act to be on the platform. Unfortunately, you won’t find it there, but you can always watch ‘Dave Chappelle: Sticks & Stones‘ where he takes up gun culture, the opioid crisis, and celebrity scandals.

Since Chappelle’s new stand up comedy is more about expressing his opinion in the best way he knows how ‘8:46’ is available to everyone via YouTube. Since it is a Netflix special, the series has been released on Netflix Is A Joke, their official channel. Check it out here.

Hulu tries to stay ahead of the competition by making smart additions to the platform. ‘8:46’ is not on Hulu, but the streamer offers great comedic content. Check out ‘Brooklyn Nine-Nine‘ on Hulu, which explores sensitivity and compassion within a cop show.

Is Dave Chappelle’s 8:46 On Amazon Prime?

Amazon Prime has sourced content globally, which is why it has an impressive roster that can take on the likes of Netflix. While ‘8:46’ is not available on Prime do check out ‘Fleabag‘ a stunning work of comic brilliance and exploration of the human mind.

Can I Stream Dave Chappelle’s 8:46 Online For Free?

Yes, the whole point of Dave’s new standup special is to make it reach as many people as possible. ‘8:46’ is not just performance art, it is protest art. The idea of such art is to free itself from commerce so the message reaches everyone. Thus, you can access ‘8:46’ on YouTube for free.