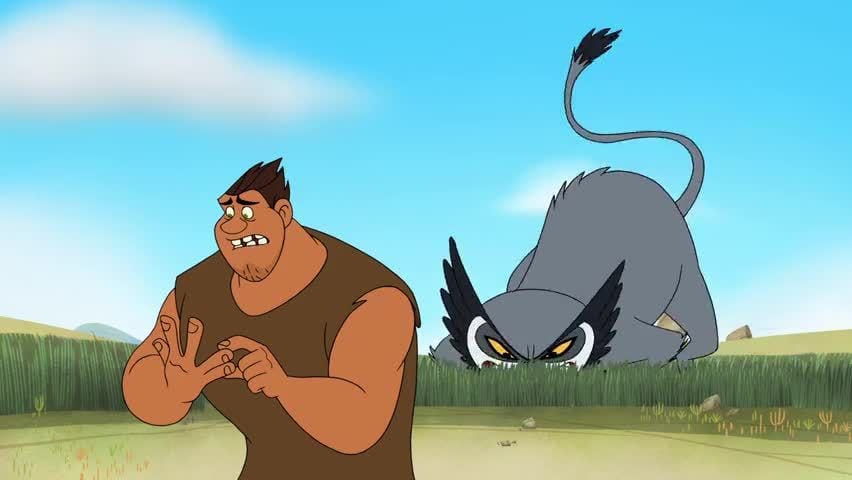 ‘Dawn of the Croods’ is an American 2-D animated web series that airs on Netflix. The show first premiered on December 24, 2015. It is a product of DreamWorks Animation. If that name is familiar to you, it is because the same house brought widely popular film franchises like ‘Kung Fu Panda‘, ‘How To Train Your Dragon‘, ‘Madagascar‘, ‘The Boss Baby‘ and ‘Shrek‘, among others.

This comedy and adventure series is based on the characters created by John Cleese, Kirk DeMicco and Chris Sanders. Obviously, you must have guessed by now that the show is related to the movie ‘The Croods’. In fact, the events of the series take place before those of the film and it shows you the adventure of the very first family on Earth. The family encounters some new beings and go on new adventures like school elections and parties.

Animation based television series has gained quite a fame over the last few years. ‘Dawn of the Croods’ is one such 2-D animation web series. Netflix has made a foray into animated shows as well, noticing how they can be used to cater to both kids and adults. Some of the shows aimed at adults have included the likes of ‘BoJack Horseman‘, ‘Love, Death & Robots‘, and ‘Disenchantment‘, while the shows aimed at kids include ‘Larva‘, ‘Hilda‘, ‘Beat Bugs‘ and ‘The Adventures of Puss in Boots‘. ‘Dawn of the Croods’, however, can be enjoyed by both adults and children.

Dawn of the Croods Cast: Who is in it?

The cast of ‘Dawn of the Croods’ is led by Dan Milano in the roles of Grug, Womp, and Bud. Cree Summer lends her voice to Ugga, Pat, Clip, and Pup Howler. Stephanie Lemelin voices Eep while A.J. Locascio voices Thunk, Baitsy, and Steve. Grey Griffin voices Sandy and Lerk, while Laraine Newman lends her voice to Gran, One-Eyed Amber, Mosh, and Pram. Among the additional voice actors are some noted names, and Chirs Parnell’s jumps out immediately. For those unaware, he is famous for ‘Archer’. Sam Reigel started off as the voice director but was replaced by Brendan Hay.

Dawn of the Croods Plot: What is it about?

In ‘Dawn of the Croods’ the family in focus, that is the Croods themselves, meet new creatures and have a bunch of first-time experiences like slumber parties. They also face several hiccups along the way, but that is just part of life, and the Croods take it as it comes.

When we are first introduced to the Crood family, we see them in the Valley of Aaagh, which is idyllic. If you have seen the movie, you might remember that this Valley was shown to be destroyed, but as the events of the show precede it, we see how life was before the destruction. Despite the general sense of calmness in the valley, everyone still has to be on their toes in order to get through the danger-fraught days, but they have time to squabble and learn about friendships and families.

The show can be very heartwarming at times, to say the least. As we are introduced to the first dysfunctional family in history, several actual prehistoric themes are explored. For example, there was a point of time when mankind shifted from the hunter-gatherer social setup and shifted to form an agrarian society. This is explored when Eep tries to get the family to turn vegetarian. The series takes a fun route in showing modern problems in prehistoric times. If you ever feel that your overprotective parents are seriously denting your street cred as a teenager and messing up with your social calendar, you are going to relate to Eep.

It is interesting to see how the social structure is set up in the valley, and how a lot of our modern day social behaviors are reflected in older times. For example, you can witness people gossiping about rock picket fences, and you know you have given your neighbor the stink eye more than once if they have not maintained the hedges that separate your houses. The series does not shy away from imparting moral lessons, like asking us to mind our conscience. This is unsurprising since part of its target audience are growing children, and Netflix is careful to be sure to impart some value with their entertainment content.

However, in some parts, the show seems to overdo the violence, be it people being dragged away by predators, or being rammed into cliffs. Overall, there is a sense of mayhem to the show, but then again, perhaps, that is exactly how it was in the days of yore. In the end, what stays with the viewers is the sense of bonding among the family members and the message of ‘one for all, and all for one’ that the Crood family embodies.

Dawn of the Croods Season 5 Release Date: When will it premiere?

‘Dawn of the Croods’ Season 4 premiered on July 8, 2017. As far as the next season goes, we have bad news for the fans. It appears as though Netflix has decided that four seasons were enough for the show and has not gone ahead with another season. Though, fans should not lose all their hopes. There’s still a possibility that some other network picks up the show or Netflix itself brings the show back after a few years. If that happens, we will update you about ‘Dawn of the Croods’ Season 5 release date.

Dawn of the Croods Trailer:

While we wait for any positive news on’Dawn of the Croods’ Season 5, check out this trailer to refresh your memories. If you haven’t seen the show yet, head over to Netflix to catch all the episodes of the previous seasons.