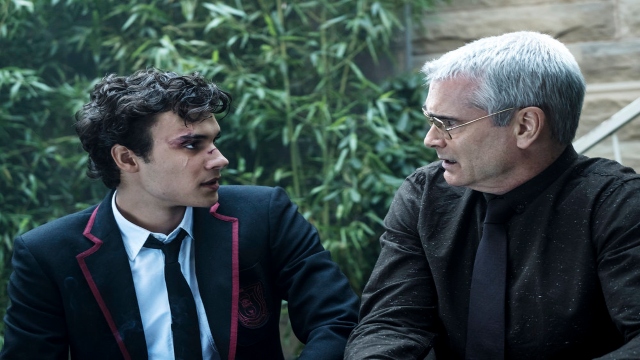 ‘Deadly Class’ is an American television series that draws inspiration from a comic book series of the same name. The show has been conceptualized by Rick Remender and Miles Orion Feldsott. The series first launched online as a special preview (that served as its first episode) on Syfy on December 20, 2018, and went on to premiere on January 16, 2019, finally concluding on March 20, 2019. The show, set against a backdrop of the late ’80s counterculture, follows a destitute teen who is recruited by an elite private school specializing in next-generation criminals.

Deadly Class Cast: Who is in it?

The main cast members of the show are as follows:

Benedict Wong who plays Doctor Strange’s sidekick in the MCU plays Master Li; he is strict and unwavering in his mercilessness as the headmaster of King’s Dominion. Benjamin Wadsworth appears as Marcus Lopez Arguello; he is the newest member of the King’s Dominion’s. Lana Condor, of ‘X-Men: Apocalypse‘ fame, appears in the role of Saya Kuroki; she heads the Kuroki Syndicate while also sponsoring Marcus. María Gabriela de Faría cast as Maria Salazar is a part of the Soto Vatos and the ex-girlfriend of Chico. Luke Tennie plays Willie Lewis; he leads the F.W.O. (First World Order) and close friend to Marcus. Liam James plays Billy Bennett; he is an amiable punk rocker whose father is a corrupt officer involved deeply in the business of smuggling drugs. He and Marcus’s best pals. Michel Duval appears as Chico; he is the head of the Soto Vatos and ex-boyfriend of Maria.

The recurring characters are as follows: Henry Rollins plays Jürgen Denke, who once worked as an instructor at a Poison Lab. Erica Cerra appears as Miss De Luca, who is skilled at hand-to-hand combat and teaches the art. Taylor Hickson appears as Petra: He belongs to a death cult and is a goth. Siobhan Williams appears as Brandy Lynn; he heads the Dixie Mob and is known to racist in his beliefs. Sean Depner plays Viktor; as a child of one of the assassins of Joseph Stalin, he is famously known for his notoriety. Jack Gillett plays Lex Miller; he is a castaway. Isaiah Lehtinen plays Shabnam, the child of a rich banker who outcasted by his peers. Ryan Robbins plays Rory Helmsley; a poor man having no means who preys on the fear of other homeless people.

Deadly Class Plot: What is it about?

‘Deadly Class’ follows the story of a young vagrant named Marcus who is offered recruitment at the King’s Dominion, a private school known to produce criminals where parents send their children to give birth to an entirely new generation of evil. As Master Lin takes him under his wing, he gets accustomed to the ways of the academy and struggles to train in deadly arts whilst battling the unwelcoming aura from its students.

Every teenager at the school has to go through rigorous training in order to learn how to administer poison, lead assassinations, train at physical combat and manipulate victims psychologically and to their advantage to further their motives.

Marcus’ only goal for getting enrolled at the institution is the assassination of Ronald Reagan, the American President, who he believes to be his parent’s murderer. While at school, Marcus becomes witness to a host of immoral activities and is often seen struggling with the thoughts grazing his mind. Try as he might, to become involved in the pranks and hazings of the Legacies and Rats, he can’t help but have conflicted feelings about all that is going around at the academy.

‘Deadly Class’ also has quite a few surprising deaths and unexpected twists that take you down a dark arc, a merciless curriculum, some very unforgiving social cliques, and adolescent uncertainties. The show follows the lives of the students, as you visit their pasts and confront their own individual issues to grow as individuals. It makes us question the morals and philosophies that we live by. The extreme characters, their unexpected dark arcs and deeply layered characters make this show an extremely engaging watch.

While talking about the storyline of the show in an interview, Remender said, “I don’t mean to sound like a pessimist or to overstate the fact, but I think we can objectively say there’s a lot of bad people in the world. And it’s interesting to me is how a young child becomes a bad person in all their various forms. I think King’s Dominion is that place. To me, the interesting part of it is throwing characters into that grinder and seeing what they choose to come out as.”

The Hollywood Reporter aptly summarizes the show, saying, “Unquestionably flashy, unquestionably stylish, unquestionably audacious within a very familiar standard of what constitutes audacity, Syfy’s new graphic novel adaptation Deadly Class represents Peak Angry Young Man TV. Tailor-made for subreddits and other dark pockets of disaffected youth in that brief window between idolizing Holden Caulfield and discovering Ayn Rand, it is also glib and nihilistic and derivative. In short, ‘Deadly Class’ is a show to be loved and then hastily outgrown.”

If there is an upcoming season, it is likely to follow Master Lin’s elaborate plans and perhaps the catacombs underneath the school, not to mention the many betrayals and other arcs that the comics have already explored.

Deadly Class Season 2 Release Date: When will it premiere?

‘Deadly Class’ Season 1 premiered on January 16, 2019. As far as the next season goes, we have bad news for the fans. On June 4, 2019, Syfy announced the cancellation of the show. The decision to cancel the show is a little surprising considering the show enjoys quite a following. In any case, fans should not lose all their hopes. There’s still a possibility that some other network picks up the show. The cast members and creators are trying to get streaming platforms like Hulu and Netflix interested, and I, for one, hope that the show gets picked up. If that happens, we will update you about ‘Deadly Class’ Season 2 release date.

Watch the trailer of ‘Deadly Class’ Season 1 below to refresh your memories of the show and let us know if it does justice to the comic it’s been inspired from. If you have not seen the series and like flashy shows combining action, adventure, drama, and black comedy, this is the series for you.