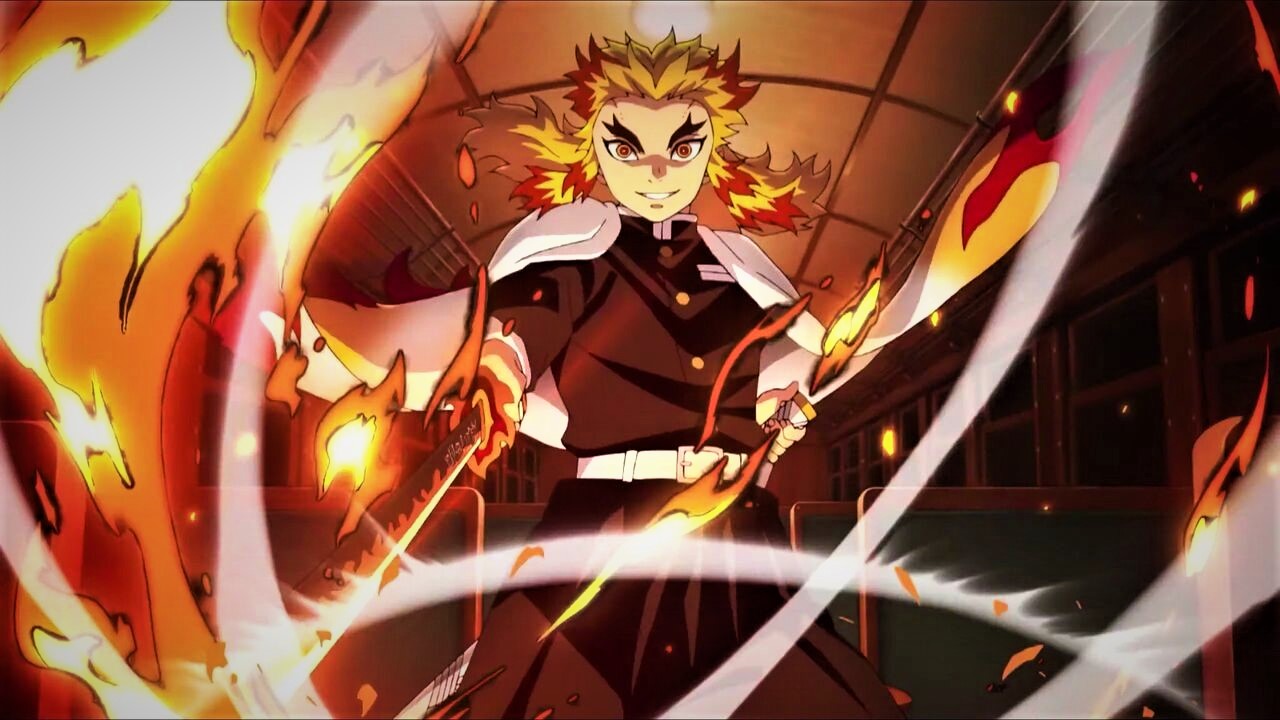 Based on the Japanese manga series of the same name written and illustrated by Koyoharu Gotouge, ‘Demon Slayer: Kimetsu no Yaiba‘ or simply ‘Kimetsu no Yaiba’ is a dark fantasy adventure TV anime. The show recounts the story of Tanjirou Kamado, the lone bread-winner of his family after his father’s passing. One ordinary day he visits a local village to sell charcoal but fails to return to his home located on the top of a remote mountain before nightfall. On a strange man’s insistence, Tanjirou decides to take shelter in his house for the night, clueless that it will become the worst mistake of his life. When he returns to his home the following day, he finds his family mercilessly slaughtered while the only living member, Nezuko, is now turned into a blood-thirsty demon.

Devastated by his failure to protect them, Tanjirou vows to avenge their brutal murder and turn his sister back to a human being. Season 1 of the anime first premiered on April 6, 2019, and concluded after an era-defining 26 episode run on September 28, 2019. Since the second season of the series is about to be released, let’s have a look at everything we know about its first episode.

Demon Slayer Season 2 Episode 1 is slated to premiere on October 10, 2021, in Japan. It will air at different times on Tokyo MX, GTV, GYT, and BS11. The series is produced at Ufotable (‘Fate/Zero’) with Haruo Sotozaki helming the directorial team and Akira Matsushima serving as the character designer. The Japanese singer and lyricist LiSA has performed the opening theme song “Akeboshi” (Morning Star) as well as the ending theme song “Shirogane” (Silver).

Season 2 of ‘Demon Slayer: Kimetsu no Yaiba’ is going to be accessible for streaming on Funimation in the United States, Canada, New Zealand, Australia, the United Kingdom, and Ireland. People who don’t have a Funimation subscription need not feel disappointed; Crunchyroll and Hulu are both going to stream the latest installment of the dark fantasy adventure series as well. People from Scandinavian countries can watch season 2 on Wakanim. In Southeast Asia, the anime is licensed by Muse Communications, and it will stream the dark fantasy show on Bilibili, WeTV, iQIYI, and Viu.

Fans can also head to popular video-on-demand platforms such as Google Play, Microsoft Store, iTunes, and Vudu to watch season 1 and check the availability of the second installment. Platforms such as Xfinity, AppleTV, Amazon (on-demand), Spectrum, DirecTV, and Adult Swim all have the previous season of ‘Demon Slayer: Kimetsu no Yaiba’ in their catalogs.

In the season 1 finale, After a few days of challenging and productive rehabilitation training at Shinobu Kocho’s mansion, Tanjirou and his friends are finally ready for their next mission. Meanwhile, Muzan Kibutsuji is furious by the incompetence and the failures of the Lower Twelve Demon Moons. Rui’s death at Mount Natagumo has made it absolutely clear that these demons are no match for the Hashiras. In his frustration, Muzan ends up massacring almost every member of the Lower Twelve Demon Moons until he encounters Enmu. The frightened demon somehow manages to convince Kibutsuji that he can be a worthy servant and even gets a healthy dose of his blood.

With his newfound powers, Enmu immediately embarks on his mission. At the same time, Tanjirou, Inosuke, and Zenitsu learn about the growing instances of disappearance on the Mugen train, which has directly been linked to the presence of a powerful demon. Now, Equipped with the experience gained during the rehabilitation training, the demon slayers board the locomotive with Nezuko, where the Flame Hashira Rengoku Kyoujurou is already investigating the mysterious disappearances. However, the promising Demon Corps members are clueless that Enmu of the Lower Twelve Demon Moons is also on the same train.

In season 2 episode 1, Rengoku, who is an irreplaceable member of the Demon Corps, will prepare himself for the perilous mission at the Mugen train along with lower-ranked members of the Demon Corps. However, once he is there, the Flame Hashira will finally begin to truly comprehend the extent of the dangers that lurk in the compartments of the locomotive. Unperturbed by the challenges awaiting him, Rengoku will immediately start to look for the culprit of the kidnappings, unaware that a fearsome adversary is waiting for the right time to attack the Demon Corps.