Dennis Quaid is Hollywood’s ‘man for all seasons.’ He reinvented himself in every stage of his career according to the needs and demands of the industry. The Texas-born actor dropped out of college to follow the footsteps of his brother, who is also an accomplished actor. After landing in LA in the mid-70s, Quaid managed to get into Jonathan Demme’s ‘Crazy Mama (1975).’ His first significant role was in the 1977 film, ‘September 30, 1955’. Quaid emerged as a talent to reckon with after his breakthrough role in ‘Breaking Away (1979).’ His long-cherished dream of sharing screen space with his brother Randy Quaid was finally realized with the movie ‘The Long Riders (1978).’

After his directorial debut in the 1994 TV movie, ‘Everything That Rises,’ Quaid again went into another low-key mode. The early 2000s witnessed his return with ‘Any Given Sunday’ and ‘Frequency’; ‘Far From Heaven (2002)’ and ‘Vantage Point (2008)’ later followed. Quaid soon moved into television with the 2012 show ‘Vegas.’ At this point, the question that might be circling your mind is what is the next Dennis Quaid movie or TV show? Well, the good news is that we have a clear answer to that question. Here’s the list of upcoming Dennis Quaid films/TV shows scheduled to release in 2019 and 2020. We can only hope that the latest Dennis Quaid movies would be as good as some of his recent ones.

‘Goliath’ is an Amazon drama series, which enters its third season this year. Created by David E. Kelley and Jonathan Shapiro, the third season features Dennis Quaid, Amy Brenneman, Beau Bridges, Griffin Dunne, Sherilyn Fenn, and Shamier Anderson in key roles. Billy Bob Thornton also joins the cast as a new member. Lawrence Trilling returns as showrunner. Season 3 starts with the unexpected death of an old friend of Billy McBride, played by Thornton. The incident prompts him to dig deep into the events that led to his friend’s death. During the investigation, McBride faces a stand-off with the Central Valley billionaire rancher, played by Quaid and his sister, played by Brenneman. The plot consists of unexpected twists and turns that uncover some old scores to settle. Amazon is yet to announce a release date for the third season.

‘The Intruder’ is an upcoming psychological thriller directed by Deon Taylor. The movie centers around a young married couple, played by Michael Ealy and Meaghan Good, who buys their dream home in Napa Valley. But the previous owner Charlie Peck, played by Quaid, who sold the house to them, turns out to be an intruder with deadly intentions. He refuses to leave the home and leads the couple to full-blown horror. The trailer hides a number of references to classics like ‘Psycho’ and ‘The Shining.’ Quaid’s performance as the horrendous house owner in the trailer has already aroused curiosity about the project. The movie is slated for a May 3, 2019 release.

‘A Dog’s Journey’ is the sequel of the 2017 movie, ‘A Dog’s Purpose.’ Dennis Quaid and Josh Gad return to reprise their respective roles in the original. Directed by Gail Mancuso, ‘A Dog’s Journey‘ also features Marg Helgenberger, Betty Gilpin, Kathryn Prescott, and Chinese pop star Henry Lau as new cast members. The plot of the film is based on the bestselling books written by W Bruce Cameron, who wrote the screenplay with Cathryn Michon, Wally Wolodarsky and Maya Forbes. According to reports, ‘A Dog’s Journey‘ is a heartwarming tale of love and care with a dog and the people around him at the center. The movie is lined up for a May 17, 2019 release.

‘Midway’ is a World War 2 action film directed by Roland Emmerich. The war epic features an ensemble cast including Dennis Quaid, James Carpinello, Patrick Wilson, Mandy Moore, Woody Harrelson, Darren Criss, Nick Jonas, Ed Skrein and Aaron Eckhart. The movie is based on the true story of the Battle of Midway. Considered as a decisive naval battle in the Pacific theatre of World War II, the Battle of Midway took place June 4 and 7, 1942. The action drama chronicles the mayhem, destruction and unending spirit of the soldiers and pilots who are caught at the heart of the conflict. ‘Midway’ hits theaters on November 8, 2019.

‘Saurus City’ is an animated movie that features an ensemble voice cast. Directed by Nathan Smith, the movie has Dennis Quaid, Emma Roberts and Ron Perlman lending voices to the lead characters. The movie centers on Slade, a heroic Raptor Knight who is a member of the Queen’s Royal Guard. The queen is injured when an attacker named Rind tries to kill her. The unfortunate incident puts Slade, the royal guard, in a dangerous and embarrassing situation. To make things worse, his sword, which is an emblem of his knighthood, breaks into two pieces during the attack.

After the incident, the Great Dinosaur clans start fighting each other for the throne and end up in doom. But Slade sees this chaos as an opportunity to regain his knighthood. Ron Perlman voices Slade and Quaid lends his voice to Rind, who is Slade’s old friend and fellow knight. The old pals face each other as arch-rivals in the battleground. The release date for the animated flick isn’t announced yet. 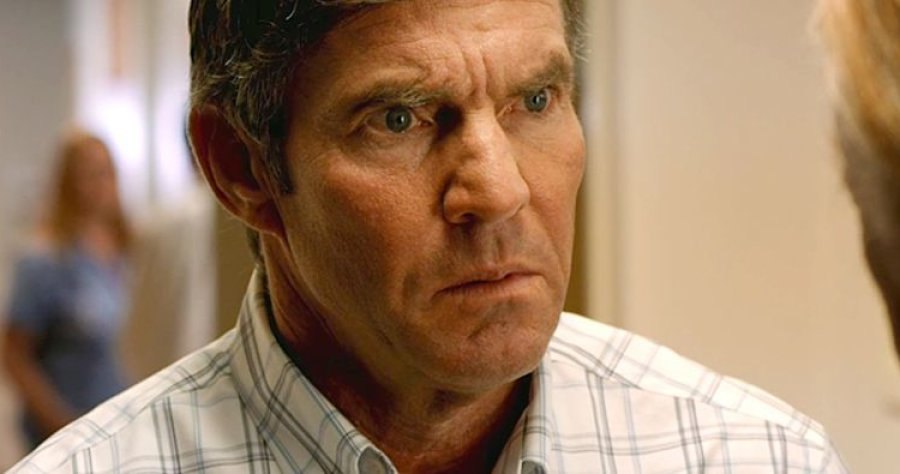 ‘Reagan’ is an upcoming biopic with Dennis Quaid playing the 40th U.S. president, Ronald Reagan. Directed by Sean McNamara, the movie chronicles Reagan’s life from childhood to his tenure in the White House. Ronald Reagan’s older version is played by Quaid and David Henrie appears as the younger version. Quaid’s part is expected to cover Reagan’s final days. The timeline of the movie also includes Reagan’s time as governor of California and his role in the destruction of the Berlin Wall. The film has been in development for several years, and the release date still remains unconfirmed.

‘Merry Happy Whatever’ is an anthology series directed by Pam Fryman for Netflix. In the eight-episode series, Dennis Quaid plays Don Quinn, a mighty patriarch who struggles to find a balance between his high-demanding family members and the preparations for the upcoming Christmas celebrations. To make things complex, his youngest daughter comes home for the holidays with a new boyfriend. Reports suggest the first season of the anthology series unfolds over the week around Christmas while other seasons center on upcoming holidays. Hayes MacArthur and Bridgit Mendler play important characters in the series. Tucker Cawley wrote and executive produced ‘Merry Happy Whatever.’ Quaid, Fryman, Kapital Entertainment’s Kaplan and Dana Honor, and TrillTV’s Trilling also serve as executive producers. Netflix is expected to air the series by the end of 2019.