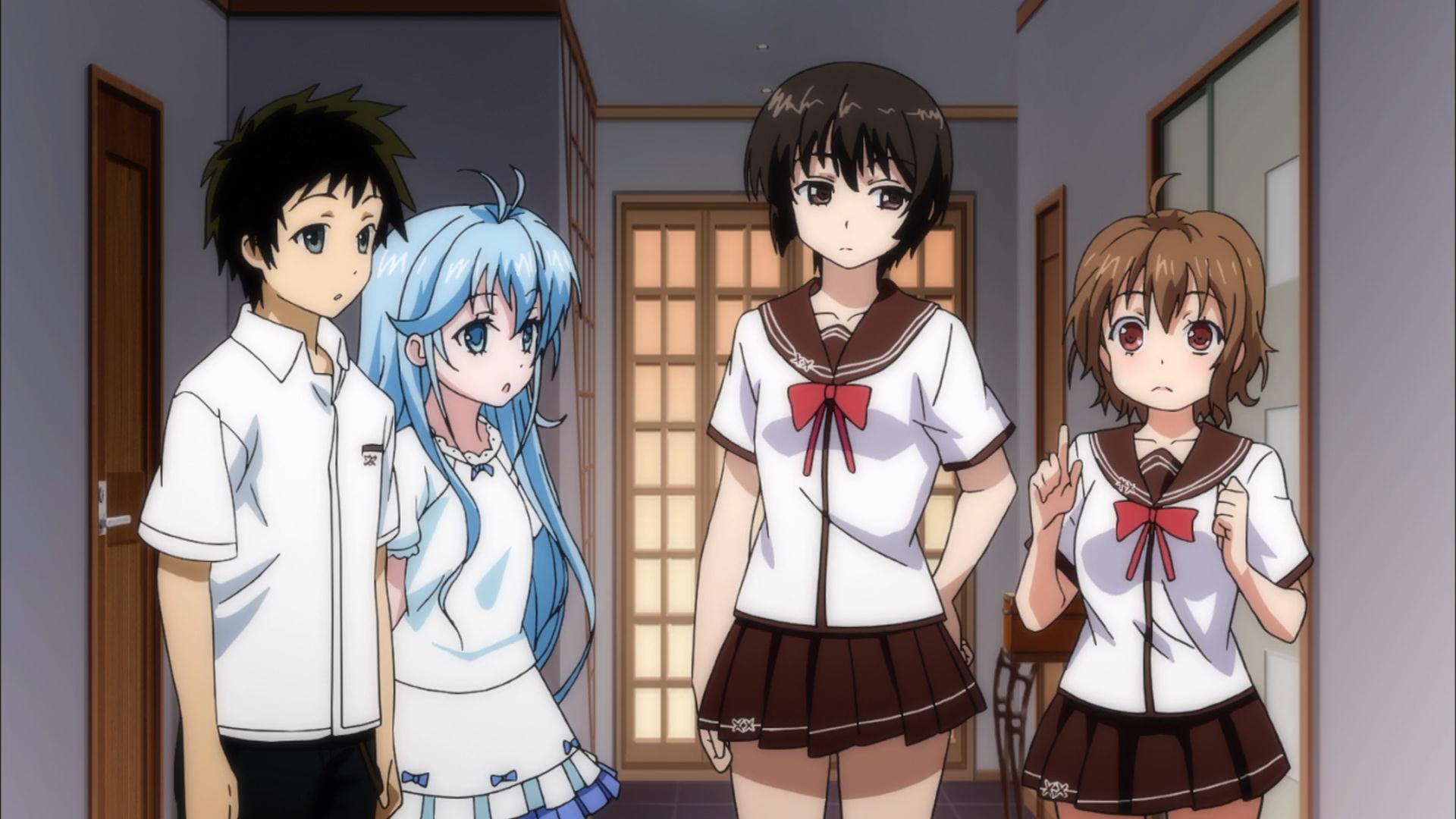 As humans beings, we often tend to distort our own realities based on what we want to see in the world around us. We’ve all had unpleasant memories that we try to escape by feeding ourselves with inconceivable lies. ‘Ground Control Of Psychoelectric Girl’ revolves around the lives of characters who do the same and try to believe that their own perception of the world around them is the only one that matters. It is a slow paced anime and on the outside, it seems like a typical slice-of-life show that keeps its head above water using Harem. Though that is true to a certain extent, ‘Ground Control Of Psychoelectric Girl’ also brings in some really subtle lessons throughout its 12-episode span that can be relatable for anyone who has gone through teenage years.

It truly shines bright with its main characters who have eccentric personalities and also a whole lot of depth to them. They are unique in their own ways and are constantly changing. If you pay close attention to the details of the dialogues and also to the structuring of various events in this show, you will surely be able to get a lot more out of it than you expect.

Overall, ‘Ground Control Of Psychoelectric Girl’ is definitely not for someone who is looking for something explosive and plot driven. But if you enjoy watching an anime that has a lighthearted feel, then this is one of your best options. It explores a set of relatable philosophies that one may experience while going through puberty and brings in some unforgettable life lessons that may seem simple on the surface but are actually quite profound. So this one really deserves a shot and I can assure you that in one way or another, it will change the way you see your own life.

Ground Control Of Psychoelectric Girl Season 2 Release Date: When will it premiere?

‘Ground Control Of Psychoelectric Girl’ Season 1 premiered on April 15, 2011 and ran until July 1, 2011 and within this span, it covers a total of 12 episodes. The anime has an average rating on most platforms and its sales after the first season have supposedly been good enough for a sequel. The only problem with it is that even after being quite popular back in the day, there is no demand for it anywhere. Usually, even the shows that are slightly popular, have a fixed set of fans who keep demanding for a season 2 on various forums and some even start petitions for these. But in this case, all the noise seems to have toned down and most anime viewers don’t have much hope that ‘Ground Control Of Psychoelectric Girl’ season 2 release date will ever be a reality.

Even then, it’s still not impossible, as every once in a while, new seasons of the most unexpected shows pop up and surprise their fans. So if you’re one of those Shaft Studio fanboys/girls, then you can expect an announcement in the next one or two years. But beyond that, it would be better to just leave this one behind and look for other similar science fictions anime shows.

As of now ‘Ground Control Of Psychoelectric Girl’ is not available on any official streaming platforms but as soon as we get any news regarding its availability, we will update it here.

Makoto Niwa obsessively tallies all the negative and positive experiences of his life in order to measure how things are going for him. One day, his parents decide to move overseas and that’s when he is forced to move to his Aunt’s place. Unlike most people, he sees this as an opportunity to get a fresh start on life. He believes that he can continue living the rest of his teenage years in peace but little did he know that he would now get to meet a cousin he had never known about.

As soon as he moves to his Aunt’s place he finds out that all this while, he had a cousin sister, who is far from a normal person. Though she is the same age as him, she keeps herself wrapped in a futon all day instead of going to school like an ordinary kid. She even denies being from this world and claims that she is an alien. To make her claims sound more convincing, she has also developed a weird speech pattern and personality. Makoto, who was starting to feel all optimistic about his future, soon realizes that his dreams of living an ordinary life will not be fulfilled anytime soon.

Later, he discovers many other eccentric young women all over the town and his tally sheets seem to be full of all the negatives. But with time, it hits him that an unusual youth may not necessarily be all sunshine and rainbows; but it sure as hell is way more thrilling and adventurous.

Maekawa is one of the tallest characters of the show who claims that if she raises her arms over her head for more than 10 seconds, she will faint. She is known for her weird dressing sense as she wears all kinds of different cosplay costumes to work. She has got short brown hair with brown eyes and is often seen in a diverse set of cosplay costumes representing animals, movie characters and even aliens. She has a calm personality but there are times when she gets really excited while teasing Ryuuko over things that can be quickly misunderstood.

Ryuuko Mifune is one of Makoto’s classmates who later starts to develop a crush on him. The two of them even exchange phone numbers later on. She has short messy brown hair with deep maroon colored eyes. She feels very conscious of her hair, especially when she is around Maekawa. She is always full of energy and usually tends to misunderstand most of Maekawa’s jokes. She denies having a thing for Makoto but instantly shows signs of jealousy when she sees him with other girls of the school.

Makoto is the main character of the series who moves to a new city after his parents move overseas. In appearance, he is short, has spiky black hair and greyish colored eyes. He is calm and really tries to be optimistic towards his life. During interactions, he tries to be nice to everyone but also gives sarcastic replies when the person in front of him stops making sense. He stays with his aunt and maintains a good relationship with her. The only time he chooses to ignore her is when she claims that she wants him to be her husband.

Erio is Makoto’s first cousin who had once disappeared while coming back from school. She was later found floating in the sea with absolutely no memories of what had happened to her and how she had ended up where she was. After this incident, she develops a very weird personality and even starts dressing up differently. She starts showing an extreme fascination with aliens and claims to be an alien investigator herself, who is monitoring humans. But later, she becomes normal again and starts doing things normal humans would usually do. She really enjoys looking at the night sky through a telescope and usually draws what she sees.