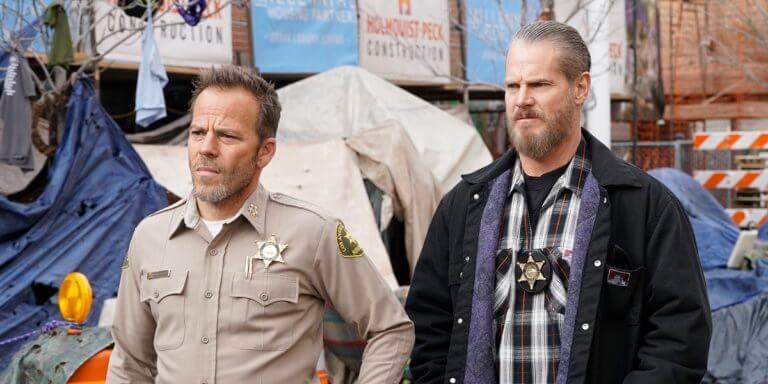 ‘Deputy’ is a cop drama that follows Deputy Bill Hollister who is asked to step into the position of Acting Sheriff in the Los Angeles County Sheriff’s Department, after the untimely death of his predecessor. His entry in the LACD results in clashes between him and his co-workers as he stands against the exploitation of justice, limiting bureaucratic interference in the system. He believes in one and only one thing – the right time to serve justice is now.

A Will Beall and David Ayer creation, season 1 premiered on January 2, 2020. So far, Bill has managed to strongly tackle corruption and injustice, by hook or by crook, even if it means breaking the low. We also see a vulnerable Bill trying his best to make sure his family doesn’t bear the brunt of his position. However, he hasn’t received much success in it. And with the elections around the corner, it will be even more difficult for Bill to sustain his position in the department.

Episode 9 released on February 27, 2020. And if you’re thinking it takes the heat off Bill’s life, you’re highly mistaken. In case you can’t remember what we are hinting at, don’t worry, we have added a recap for you. However, if you’d like to know the details of the upcoming episode, i.e ‘Deputy’ season 1 episode 10, read on.

The upcoming episode has been titled ‘School Ties.’

In episode 10, we can expect to see Charlie panicking upon learning that a member from the local library, who happens to be her protege, is involved in a gang. With the help of the entire department, Charlie might move heaven and earth to ensure that the young girl is safe and away from all the gang dealings.

Meanwhile, as curtains are closing in on Bill’s tenure as an Acting Sheriff, he might realize he actually wants to continue and might re-enter the race, against those who desperately want him out of the system. On the other hand, Cade and Teresa might have to find a way to deal with the problems that have been arising in their household, as a result of the pregnancy news.

Where to Watch Deputy Episode 10 Online?

You can catch ‘Deputy’ season 1 episode 10 on Fox at the above-mentioned time. You can also watch the episode on Fox’s official website.

The episode is titled ‘Entitlements.’

In episode 9, we see a chain of home-invasions affecting the whole of West Hollywood. Upon investigation, Bill finds out that it’s a burglary ring run by the kids from affluent families, just to earn some bragging rights on the internet. Jerry, does what he is expected to do – takes advantage of the situation to fill his bank account, by letting the perpetrators go. Bill however, efficiently deals with the matter and gains the support of the Mayor of West Hollywood.

As expected, Jerry gets all riled up and we learn that he’s holding some dirt on Bill, with Charlie’s help. It’s really confusing to guess what’s her deal with Bill. Why does she dislike him so much, when he has always been fair to her? Meanwhile, Paula’s mother makes an entry, like a breath of fresh air. Also, Maggie is dating Wyatt! Since the news of the baby broke, things are not looking good between Cade and Teresa, and Roberto and Camilla.

Elsewhere, Bishop is heartbroken after her partner Genevieve fails to give the one thing she’s always longed for – Acceptance. When Bishop comes out to her as Non-Binary, Genevieve freaks out and goes “I’m a lesbian. A woman who likes women. And if you’re not a woman, then what does that mean for me, for us?” To which, Bishop responds, “Well, I can’t tell you what it means for you. But for us, I know that I have to bring my whole self to this relationship.” Poor Bishop! She deserves better. Bishop ends the conversation with, “Just so we’re clear. I wanted your acceptance, but I didn’t need your acceptance.” Yes, way to go Bishop! Well, we can only hope she finds some support in the Hollisters.