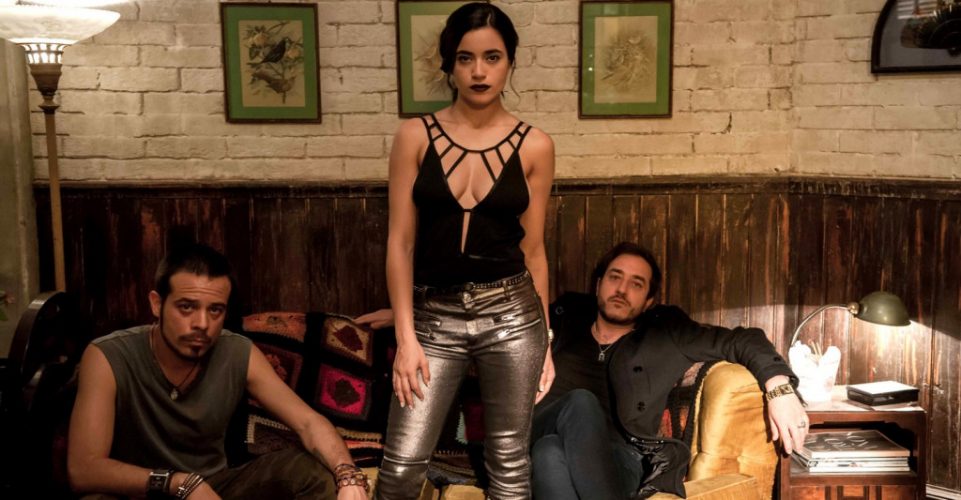 ‘Diablo Guardian’ is a Mexican web television drama that has been adapted by Televisa, a Mexican multimedia mass media company, and is available for streaming on Amazon Prime. The show premiered for the first time on 3 May 2018. It is based on Xavier Velasco’s 2003 novel ‘Diablo Guardian’.

The story follows a Mexican teenager who absconds with a large sum of money, to lead her dream life in America, but things go terribly wrong for her as the money dries up and her life begins to spiral out of control. The show which meshes world-class acting and smart cinematography with a mature, grim, dark, and immensely fascinating thriller plot.

Diablo Guardian Cast: Who’s in it?

As a show adapted from a Spanish bestseller, the language is also Spanish, with a dub not out yet. Naturally, nearly all the lead cast is from a Latin American origin. The show’s towering figure and protagonist, Violetta, is played by none other than Paulina Gaitan, a name which will ring very familiar to all TV drama enthusiasts in the US. Paulina was the same actress who played Tata Escobar, Pablo Escobar’s wife, in the Netflix original ‘Narcos‘. Although Paulina has not yet shot up to mainstream fame besides ‘Narcos’ and ‘The River’, she is a veteran actress with a long career both in films and on a silver screen, with a few trophies for her acting to boot. After ‘Narcos’, ‘Diablo Guardian’ is one of her breakout hits that truly showcase her acting prowess. Adrian Ladron plays Pig, a writer looking for inspiration, who finds this in Violetta. While these are the main two characters that the story seems to be concerned about, there are other supporting characters who lend an unusual richness to the tale.

In the upcoming season, it is expected that the main characters will return, while a slew of new characters might be added, to cross paths with Adrian and Paulina’s characters, which is bound to make their lives and the show more interesting.

Diablo Guardian Plot: What is it about?

The plot of ‘Diablo Guardian’ follows a runaway teenager girl who steals over $200000 from her parents, frustrated with the state of her life, to escape and find a new life in New York, where she is met with the ugly underbelly of the bright lights in the big city, facing the grim reality and gelling with unsavory people. As a thriller, the show escalates when Violetta meets Pig, a writer obsessed about finding a new story, as Violetta sells her body and has run-ins with the underground until ultimately she attempts to break free.

While Violetta starts off as an upper-middle-class Mexican girl, she descends down the socioeconomic ladder once she reaches the USA. However, despite being forced to sell her body for money, and getting involved with quite a few seedy people, Violetta does not feel victimized. Perhaps, the novel and the show tries to portray that the American dream is so dazzling to some, that they fail to realize what they are sacrificing or ending up losing just to have a taste of that. Moreover, it just goes to show how both New York and Las Vegas are ‘make you or break you’ towns. Considering how difficult it is to adapt Xavier’s coming of age novel for television, the show has done a fantastic job.

What stands out in the show is how it plays on the popular relatable character of the prodigal. Some of us love the prodigals because we relate to them, in our desires to break free of constraints and to embrace the chaos as a part of us. Others like prodigals because we can live vicariously through them, soaking up every bit of their experiences and adventures, perhaps since we will never have the courage to embark on them, ourselves. Violetta is the perfect prodigal, while Pig, her guardian, finds the perfect muse in this woman who takes life as it comes. Pig begins his descent into a hedonistic lifestyle with Violetta and watches somewhat helplessly as he begins to develop feelings for her, as we often do for people who appear to be free-spirited. Coming to the technical success of the show, it manages to capture the vibrancy that is infused in Xavier’s telling of the events.

Perhaps Violetta’s boredom and customs of her home were so boring to her that she was happy with whatever changes in conditions that she could bring to her life, even if it was a detrimental position. Coming to the characters themselves, they appear to be arrogant, unapologetic, and not asking for love from the audience. Their interaction with the audience raises no sympathies, and this hard-headed almost fierce independence makes them as irresistible to the audience as it does to the people around them.

Hopefully, in the upcoming season, the show will explore more of Violetta’s life, her motivations and her conditions in America. We hope to see her solidify more on her version of the American dream, and set out to achieve the same, while Pig continues drawing inspiration from the way she goes about everyday life, and perhaps begins to fall even more deeply in love with her sense of absolute independence in life.

Diablo Guardian Season 3 Release Date: When will it premiere?

‘Diablo Guardian’ Season 2 premiered on April 12, 2019. While there is no official announcement for Season 3 yet, Amazon Prime has not yet canceled the show. That being said, viewers must know that the show has exhausted the novel’s source material over the two seasons. However, there is always scope for further exploration and Season 3, when it arrives might give us just that. Our best guess is that if the show does get renewed, Season 3 might release sometime around April, 2020.

Check out the trailer of Season 2 here to get a better idea of the coming of age story that this show seeks to portray, and to try and figure out what the upcoming season might hold in store.