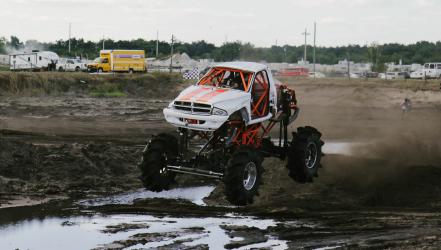 ‘Diesel Brothers‘ is the perfect reality show if you happen to love vehicles, and are interested to know about how they can be modified to suit your purposes. America has long been fascinated with cars, trying them out on different terrains, and seeing just how far and fast they can go. The Diesel brothers play to this American fantasy or dream, in their series.

“Heavy D” Sparks and “Diesel Dave” Kiley are not biological brothers, but happen to be the very best of friends. They have managed to start their own auto fix-it shop, where they handle all kinds of vehicles. Later, the dudebros brought in two additional guys to help them out in the modifications. Together they form a team that focuses on creativity and tenacity, delivering what is expected of them.

In the latest season, vis a vis, Season 6, we have already seen the brothers take on a K5 Blazer, design a dangerous minibike and race a Lamborghini. Now that we have yet another episode, you might be wondering about the antics they have gotten up to, this time. We are here to tell you that in the recap, but first, let us tell you about where and when to watch the upcoming episode of ‘Diesel Brothers’.

Diesel Brothers Season 6 Episode 3 Release Date: When Will It Premiere?

‘Diesel Brothers’ Season 6 Episode 3 is expected to release on Monday, December 23, 2019, on the Discovery Channel at 8 PM ET. Each episode has an average runtime of around 41 minutes, and since the previous seasons have dropped new episodes after one-week intervals, we expect the same to be the case in Season 6 as well.

Being a show on the Discovery Channel, the best way to watch ‘Diesel Brothers’ is if you have a subscription to the channel. However, even in the absence of a cable connection, or in case you are unable to access a television set, you have nothing to worry about. After all, cord-cutters are foregrounded in the network’s thoughts presently, since they make up a large part of the viewer base. Therefore, you can head to the Discovery Go app, and access the episodes that air on the channel.

Various streaming platforms also have deals with the Discovery channel in place, meaning that you can watch ‘Diesel Brothers’ on these platforms without any troubles. Among such platforms are, DirecTV and Amazon Prime. In the case of the latter, you have to add Motortrend to your existing pack, which offers a free week-long trial, after which you are charged $4.99.

Episode 2 of ‘Diesel Brothers’ has been titled ‘Blazer of Glory’. The naming is apt, considering that the brothers finally get to make the changes they want to the K5 Blazer, successfully. The transformation of the old vehicle and the square body truck bed, into a diesel-powered party on wheels is truly something to behold.

Diesel Dave and Heavy D have their moment of faith when the former convinces the latter to give the El Camino, a classic vehicle, what she needs, in order to get back on the road. Naturally, this project is a personal one and it is expected that Heavy D will pull out all stops to ensure the El Camino is up and running. The upcoming episode will undoubtedly see more fun, stunts, and repairs from the Diesel brothers.