What Does the Future Hold for ‘Dino Girl Gauko’? 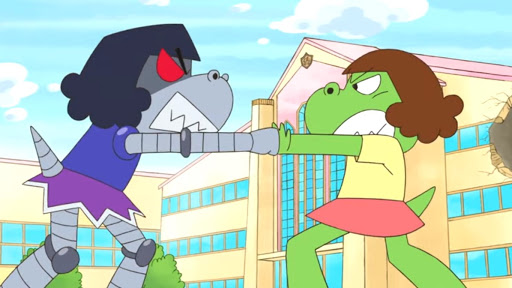 Don’t make her angry or else, you will need to face a fire-breathing dino. Well, Dino Girl Gauko, Netflix’s kid’s animated series, created by Akira Shigino and written by Kimiko Ueno, is about a regular girl named Naoko, who transforms into a Kaiju when she loses her temper.

The show, aimed toward seven-year-olds and above, was appreciated because of its silly dialogues, fantastic animation, innovative storylines, and underlying messages. So, there’s no surprise here when we learn that it has spanned two very successful seasons to date. Now the question is, will there be a Dino Girl Gauko season 3? Let’s immediately get to answering that question.

Dino Girl Gauko Season 3 Release Date: When will it premiere?

‘Dino Girl Gauko’ season 2 premiered on March 20, 2020, on Netflix. Its entire run for the second season consisted of 19 episodes, all landing on the platform on the same date. Each episode of the short-form kids’ comedy series featured a length of nine minutes.

The show, aimed toward the younger audience, managed to garner good reviews because of its hidden metaphors that aptly represent the hidden frustration of 11-year-old tweens. Of course, it is also quite funny. Created in a very weird and yet, entertaining format, Dino Girl Gauko definitely holds the potential of spanning multiple seasons.

If renewed, we can expect a short waiting time for season 3 to hit the streamer since season 2 released only within a span of around four months after season 1’s conclusion. If Netflix sticks to the aforementioned schedule, we can expect Dino Girl Gauko season 3 to most likely release sometime in July 2020.

Dino Girl Gauko Season 3 Cast: Who can be in it?

In season 3, we expect most of the main voiceover artists to reprise their original characters.

Dino Girl Gauko Season 3 Plot: What can it be about?

Naoko is a normal tween living in her small town, alongside her mum and dad, who happens to be a frog. She attends school, which is packed with several human kids like her, as well as, some fascinating anthropomorphic creatures. To top it all, their teacher is a robot. Naoko’s school does not prefer uniforms so that the other non-human entities don’t feel alienated.

Well, most of Naoko’s adventures take place in the aforementioned locales. She is fine until she is not angry. But when she loses her temper, she Hulks out to become a fire-breathing dino, aka the fiery Gauko! Season 2 embraces this same concept and follows Naoko as she deals with an imposter, attempts to thwart Bibilan’s invasion, and even participates in a Samba contest, only to discover that the rival team is led by her mother! Season 3, when renewed, will continue to follow Naoko and her friends as they have more strange adventures, coupled with face-offs with aliens and robots.

While we wait for an update on season 3, you can watch the trailer for season 2 right here.