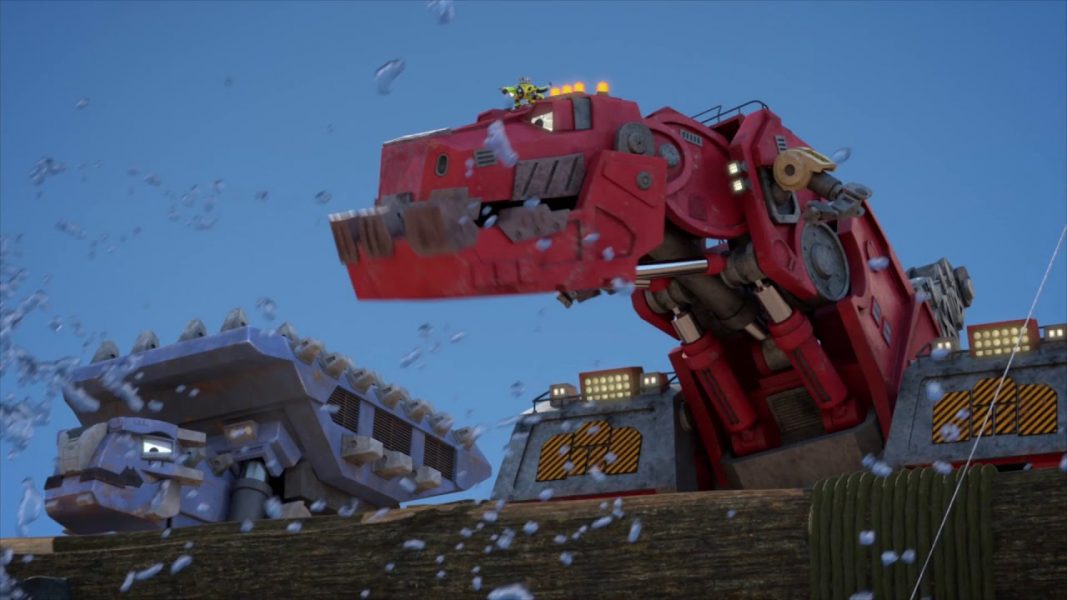 ‘Dinotrux’ is an American computer-animated web television series for kids that airs on Netflix. Produced by DreamWorks Animation Television, the show based on a 32-page illustrated children’s book of the same name by Chris Gall, and follows the adventures of a group of friends who are part dinosaur, and part construction vehicle.

Dinotrux Cast: Who is in it?

Being an animated series, the cast members are a bunch of voice actors.

Leading the pack is Andrew Francis, who voices the main protagonist of the show, Ty Rux, who is a mixture of a Tyrannosaurus Rex and a megaton excavator. Ty’s best friend Revvit, a mixture of a reptile and a rotary tool, is voiced by Richard Ian Cox.

As far as other members of Ty’s group are concerned, Brian Drummond voices Dozer, who is part Triceratops, and part bulldozer. Matt Hill voices Ton-Ton, a part Ankylosaurus and part dump truck. Meanwhile, Ashleigh Ball voices Skya, a part Brachiosaurus and part construction crane. Finally, Trevor Devall voices Garby, a part Stegosaurus and part garbage truck, and that makes up the main characters in the show.

As for the antagonists of the show, Paul Dobson and Brian Dobson voices D-Structs and D-Stroy, two evil brothers who, like Ty, are also mixtures of a Tyrannosaurus Rex and a megaton excavator.

Dinotrux Plot: What is it about?

‘Dinotrux’ is set in a fictional prehistoric period dubbed the “Mechazoic” era, which is populated by hybrid dinosaur-construction vehicles called Dinotrux, and hybrid reptile-tools called Reptools, and these Dinotrux and Reptools share a symbiotic relationship. Yes, it sounds absurd, but it is a kids show after all, and in the words of executive producer David Kidd, “It’s the idea. It’s the concept. Dinosaurs mixed with trucks. I think they’re like the number one and number two things that little kids love.”

The show starts off when Ty Rux is forced to abandon his home owing to a massive volcanic eruption. Although Ty manages to flee the destruction, he damages one of his legs badly in the process, and ends up at an unknown, yet seemingly idyllic crater. As Ty tries to settle in to his new home, he is threatened by the neighborhood bully, D-Structs, who orders him to leave. Wounded and out of food, Ty ignores D-Structs’ warnings, and instead goes out in search of food as he seeks to recuperate from his injuries. In the process, he meets a Reptool called Revvit, who repairs his leg, and from that moment on Ty and Revvit form an unbreakable bond. With his legs working again, Ty then sets his sights on assembling a team of Dinotrux, as he plans to oust the bully, D-Structs, from the crater.

In his quest to rid the crater of D-Structs, Ty and Revvit makes friends with Dozer, Ton-Ton, Skya, and Garby, and together, the band sets out to defend the inhabitants of the crater against bullies like D-Structs. Over the course of the show, Ty and co. make new friends, and face new challenges as they look to grow their community and defend it from bullies and other malevolent forces.

What makes the show a particularly great watch for kids is its positive messages on friendships and its remarkable visual appeal. Although ‘Dinotrux’ has moments of cartoon violence, these are overshadowed by how the friends come to each other’s aid, and how they stand up to bullying. Further, the characters in ‘Dinotrux’ are well-developed, making the show a great watch for kids aged seven years and above.

In terms of reception, ‘Dinotrux’ enjoys a good overall IMDb score of 7.3/10, and a rating of 4 out of 5 stars on Common Sense Media.

Dinotrux Season 9 Release Date: When will it premiere?

Kids who love ‘Dinotrux’ have long been waiting for Season 9, considering that Season 8 aired way back on August 3, 2018. Netflix had earlier announced that Season 9 of ‘Dinotrux’ (or Season 4 of ‘Dinotrux: Supercharged’) will release on April 22, 2019. But it seems like the release has been postponed to a later date. We will update this section as soon as we know more.

At the time of writing, Netflix had not released a trailer for ‘Dinotrux’ Season 9. However, here is an 11-minute look into the show to give you a glimpse of what it is all about. If you haven’t seen the show yet head over to Netflix to catch all the episodes of the previous seasons.