When Will Disenchantment Season 3 Release on Netflix? 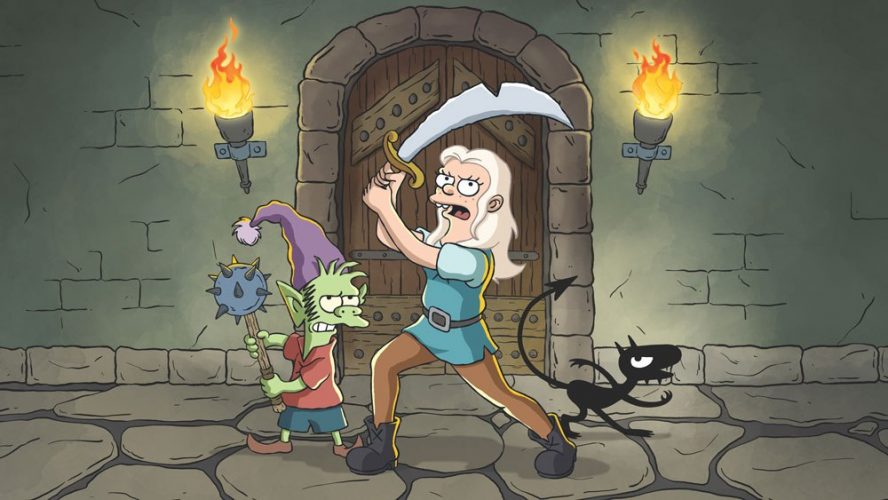 ‘Disenchantment’ is an American adult animated fantasy sitcom that airs on Netflix. It first premiered on August 17, 2018. The series which is generous with its black comedy has been created by Matt Groening and marks his first production for the streaming giants. If the man’s name sounds so familiar, it is because he has also created ‘Futurama’, and more popularly, ‘The Simpsons‘ for 20th Century Fox Television.

The premise of the show is set in a medieval fantasy kingdom by the name of Dreamland, and it follows the story of Bean, who is an alcoholic and rebellious princess. This naturally, puts her at odds to our expectations of how princesses should be from classic fantasy literature. We are also introduced to Elfo, her naive elf companion, and her destructive ‘personal demon’ who goes by the name Luci. While these do not sound like the ideal travel companions for a princess, our princess is nowhere close to the ideal herself, and this is what the show tries to capture.

Needless to say, having Groening’s name attached has drawn a lot of fans. However, critics have been a bit hesitant in praising the show outright. Although they have noted that Groening’s trademark humor is present, and is extremely satisfying, in some parts, the show decides to play it a little safe, and perhaps this might not bode too well for the future.

The show has had two successful seasons on Netflix. Now the question is, will ‘Disenchantment’ be renewed for season 3. Here’s everything we know.

Disenchantment Cast: Who is in it?

The cast of ‘Disenchantment’ is led by Abbi Jacobson, of ‘Broad City‘ fame, who plays Princess Bean, a 19-year-old alcoholic from Dreamland whose full name is Princess Tiabeanie Mariabeanie de la Rochambeau Grunkwitz. Eric Andre of Adult Swim’s popular ‘The Eric Andre Show‘ also stars in the role of Luci, the ‘personal demon’ to Princess Bean. Nat Faxon, who has worked on ‘The Descendants’, rounds off the trio, as he plays Elfo, the naive elf companion who happens to like candy.

If season 3 happens, you can expect most of the main cast members return to the show.

Disenchantment Plot: What is it about?

‘Disenchantment’ is set in a fictional medieval kingdom known as Dreamland and its Princess who loves alcohol. She has an elf companion “Elfo” and a “personal demon” Luci. This show features all their misadventures as they go looking for adventures. Though ‘Disenchantment’ is a sitcom, it features adult comedy. The princess is annoyed at her imminent marriage to Prince Merkimer. This marriage has been arranged without her consent, and she decides to act out and go on these adventures, which not only forms the basis of the show but is also the source of a lot of fun and excitement. The series takes the Disney princess tropes and turns them on their heads, viewing the entire thing through a satirical lens.

Season 2 begins with Bean travelling with Dagmar to her homeland, where she rescues an old friend and learns of a mysterious prophecy. Meanwhile, Bean and Luci come up with a plan to resurrect Elfo. Once Bean and her friends return to Dreamland, they don’t receive a warm welcome from Zog. We also see a scientific man appear in the storyline. The man is treated with suspicion by everyone, but Bean helps him escape. In the end, as King Zog is incapacitated, Odval tries to usurp the power. Bean, assisted by Luci and Elfo, try to thwart the plan.

Even after two seasons, the story feels far from complete. Season 3 might continue the thread of Bean’s adventures.

When Will Disenchantment Season 3 Premiere?

‘Disenchantment’ Season 2 premiered on September 20, 2019. As far as the next season goes, we have good news for the fans. Right after the premiere of the first season, Netflix ordered 20 additional episodes of the show. Since season 2 only had 10 episodes, it is obvious that there will be another season of the show. So, yes, ‘Disenchantment’ Season 3 stands renewed. And going by the pattern of release of previous seasons, you can expect ‘Disenchantment’ season 3 to release sometime in September, 2020 or earlier.

Should You Watch Disenchantment?

For all of Groening’s brilliance, the series does not seem all that magical as some of the jokes and humor feels a little rehashed. A criticism that aptly sums up the show, goes thus, “‘Disenchanted’ never fully engages with the genre it’s riffing on, either. A series about an alcoholic princess with no desire to conform to social norms and an elf hungry to seek greater heights provides a natural opportunity to comment on gender expectations and the limited worldview that most fairy tales serve to impressionable children. But Disenchanted doesn’t seem interested in wrestling with tropes or, for that matter, anything too deep. It’s more focused on finding easy comedy in the pockets of the universe it’s invented.” That being said, Rough Draft, the animation studio behind the project, does a fantastic job of bringing the world to life and is more mature than Groening’s other projects in terms of visuals.

The journey of the three characters takes place in a world where the magical creatures are not all that magical and seem to border on the raunchier side of things. For example, the fairy they come across is actually a sex worker. What stands out about the show is not the goofball humor or snazzy jokes that it seems so interested in, but rather the dynamic among the three characters. Bean is a protagonist who manages to be delightfully messy, reminding us of our own imperfections, Luci also becomes more than just a narrative device as the demon pushes Bean to misbehave.

The entire performance comes across as a mixture of being cajoling and sinister, so Luci’s motives are never quite clear. Amidst all this plotting and scheming, Faxon delivers the most humane performance as the besotted Elfo who always remains optimistic. As a critic rightly surmised, the show makes a slight mistake as “The dynamics between the central trio are more interesting than their episodes-spanning, overcomplicated journey. (By contrast, that almost nothing has long-term consequences on “The Simpsons” is the sort of constraint that helps build comedy.) More time is spent moving the characters around than exploring their comic possibilities. ”

Check out the trailer of ‘Disenchantment’ season 2 below.  If you haven’t seen the show yet head over to Netflix to catch all the episodes of the previous season.