Disenchantment Season 4: Everything We Know 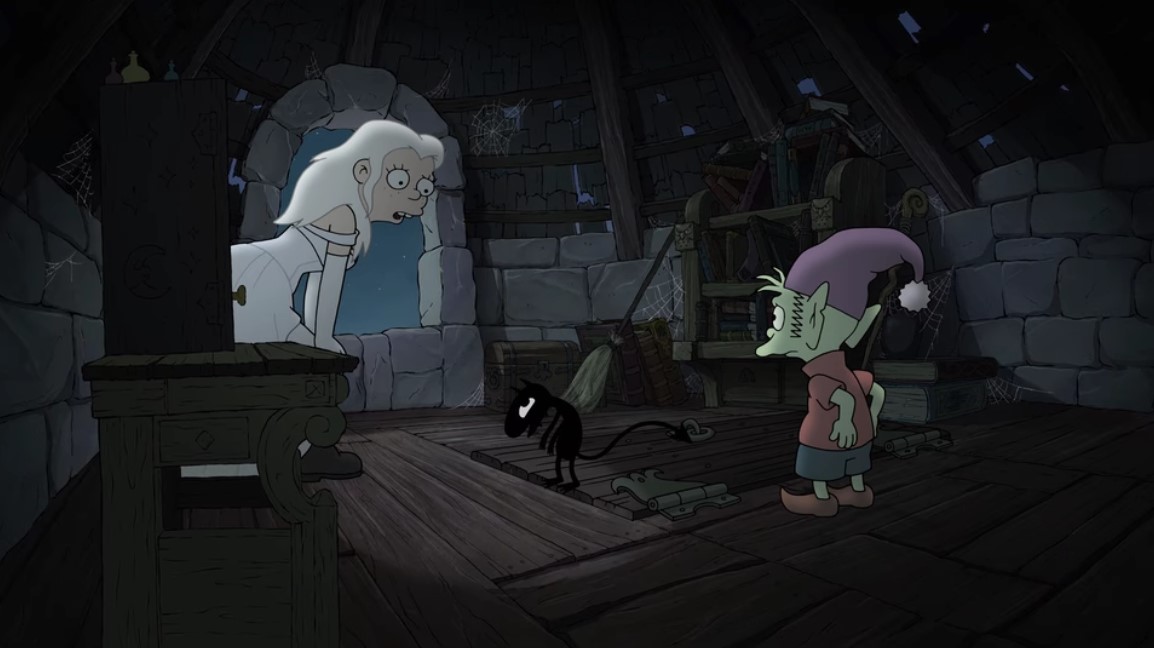 Cartoonist-animator Matt Groening never gets bored of poking fun at society and popular culture as a whole. His cult classic adult animation show ‘The Simpsons’ parodies a modern-day American middle-class society living under the threat of nuclear holocaust, and ‘The Futurama’ makes fun of the science fiction genre through its eccentric brand of black comedy. After exploring the present and the future, Groening travels back to a fantastical past in his Netflix-fuelled adult comedy ‘Disenchantment,’ where demons, elves, and ogres live side by side with humans.

The story (which is decidedly a parody of dreamy Disney’s princess fairy tales) follows authority-defying drunken princess Bean, her elven companion Elfo and her pet demon Luci, as they embark upon bizarre adventures of their own. After the show’s initial release in August 2018, it has spawned three seasons so far, garnering mostly positive reviews owing to the compelling characters and the typical humor of Groening.

After two successful and entertaining seasons of harmless fun and frolicking, the third season dabbles in more serious themes as a narrative of epic scale unfolds itself. Season 3 ends on a gloomy and ominous note, and the viewers are left to speculate the fate of Bean. If you are left to anticipate the whereabouts of the fourth installment, allow us to disclose everything we know.

‘Disenchantment’ season 3 premiered in its entirety on January 15, 2021, on Netflix. The third chapter of the animated series comprises ten episodes with runtimes ranging between 22 and 36 minutes per episode.

Let us now divulge what we know regarding the anticipated fourth installment of the deadpan comedy. Well, fans would be delighted to know that the show is supposed to have at least another ten episodes as agreed upon by Netflix. In October 2018, the streaming platform greenlit the production of a twenty-episode second volume, the first part (Part 3) of which has already been released. Therefore, fans can safely assume that another season is underway.

However, the development of the fourth season is still shrouded by medieval darkness as there has been no official disclosure that indicates the beginning of production. Needless to say, the release date of the fourth installment has not yet been officially finalized. However, if we follow the trend of the earlier seasons, it is safe to assume that ‘Disenchantment’ season 4 (or Part 4) will premiere sometime in 2022.

Disenchantment Season 4 Cast: Who can be in it?

All of the principal voice artists will reprise their respective characters in the next installment of the fantasy drama. Abbi Jacobson will lend her voice to the character of rebellious princess (now Queen) Bean, while Nat Faxon will be the voice behind adorable teenager elf Elfo. Maurice LaMarche will reprise the role of scheming prime-minister Odval, alongside Sharon Horgan, who will provide the voice behind Queen Dagmar, Bean’s oppressive mother. Famed voice artist John DiMaggio will lend his voice to the character of King Zøg, the former ruler of Dreamland.

Tress MacNeille will enliven the character of Queen Oona, the second wife of the former king. Moreover, Matt Berry will breathe life into Prince Merkimer (metamorphosed into a pig). Eric Andre will voice the character of Pendergast, the commander of the army. Andre is also the voice behind the demon, but as the demon is killed in the finality of part three, we do not know whether he will take up the dual role.

Disenchantment Season 4 Plot: What can it be About?

After a bumpy beginning in the first two seasons, the series picks up its pace from the third season, which has proven to be the best among the three in terms of reception. The finale of season 3 becomes increasingly serious as the episode moves to a close. And the final cliffhanger naturally leaves the fans with their mouths open. By the tenth episode, Zøg is seemingly unfit to rule the kingdom, and Bean is appointed as the Queen (with a passing ‘The Crown’ reference). Well, the crown is too big for Bean’s head, both literally and metaphorically.

As soon as she comes out on the balcony to address the people, a green smoke indicates the return of Big Jo and Porky, who are apologetic for their past behavior. Skeptic Bean sends them to the dungeon, but Odval and Big Jo seem to be conspiring on behalf of a secret society. Moreover, the kingdom is attacked by a hoard of ogres, who want Elfo. Bean does everything in her regal power to save Elfo, but Elfo sacrifices himself. Bean gets a surprise visit from her mother, and together they take an elevator to hell. In the final moments, Luci is killed in the elevator and wakes up in heaven, Zøg is taken to a mental asylum, and Bean is being married off to a mysterious shadow.

The fourth season or Part 4 will, in all likelihood, pick up from the cliffhanger ending and disclose the identity of the Devil. Bean’s gang has been dispersed, but Elfo is still alive. Bean will possibly go on a journey to save Elfo. Luci is perhaps the first demon who ends up in heaven and will most possibly make a comeback in the next season.

However, speaking to Variety, Groening warned about “beloved characters getting knocked off,” so we may not see more of Luci. We shall definitely get more insight into the mysterious plot of Odval. Also, the season will explore new territories as the map of the kingdom gets expanded. Rest assured, the upcoming season will feature more maddening plot twists and fantastical creatures as it will take Bean’s journey forward.