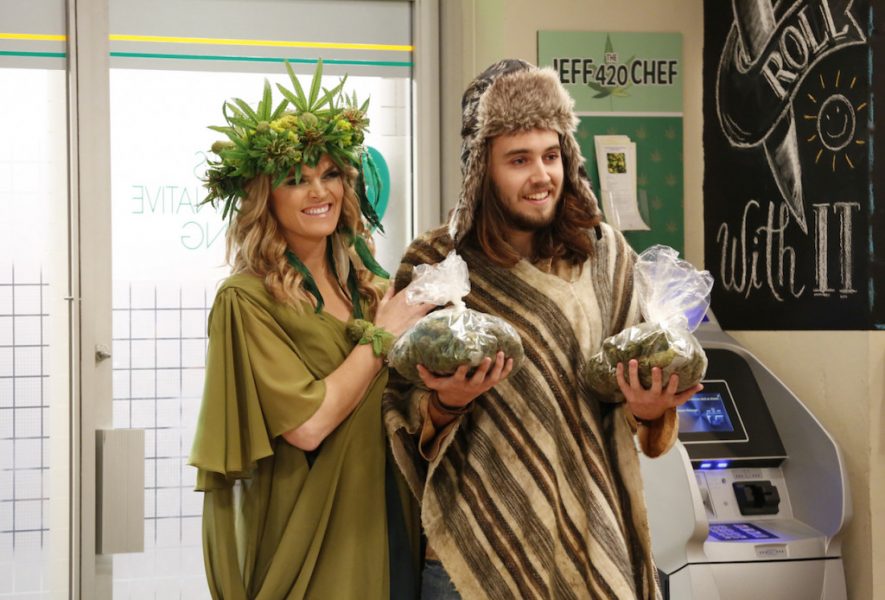 ‘Disjointed’ is an American comedy web television series that airs on Netflix. Created by David Javerbaum and ‘The Big Bang Theory’ creator Chuck Lorre, the show follows a lifelong advocate of marijuana legalization who gets to live her dream of owning a marijuana dispensary.

However, ‘Disjointed’ failed to leave a good impression on television critics and viewers, and consequently, Netflix pulled the plug on it shortly after Season 1’s conclusion. Will there be another season? Here’s everything we know about it.

Disjointed Cast: Who is in it?

In the show, two-time Emmy Award winner Kathy Bates plays the role of the main protagonist, Ruth Whitefeather Feldman, who is an ageing advocate of marijuana legalization and is living her dream of running a marijuana dispensary. She is aided by her twenty-something son, a troubled security guard, and three “budtenders”.

With Netflix having cancelled the show for a second season, we can be sure that Season 1 is the last we see of the aforementioned cast members in their respective roles.

Disjointed Plot: What is it about?

The show revolves around Ruth Whitefeather Feldman, an ageing advocate of legal marijuana. After decades of advocacy, Ruth finally gets to live her dream of living in an era of legal marijuana. With advocacy no longer required, Ruth has to find a new purpose in life, and she does so when she opens a medical marijuana dispensary in the city of Los Angeles.

Of course, running a marijuana dispensary is no easy task, and requires honest employees and requisite security. For the same, Ruth enlists the help of her twenty-something son, who is fresh out of college, and a team of young “budtenders” to run the place. For security, Ruth enlists the help of Carter, a war veteran who with three Iraq tours under his belt and acute PTSD from his days in the war.

Despite doing the necessary to run the dispensary smoothly, very few things actually go according to plan for Ruth. As the show progresses, Ruth runs into one problem after another. First, owing to the malicious work of professional marijuana web show hosts Dank & Dabby, Ruth’s dispensary runs into trouble. Later, Ruth faces more trouble for accidentally selling cannabis to minors and smoking pot in the national forests. These avoidable problems land Ruth’s dispensary in the scanners of the Drug Enforcement Agency (DEA) and the US federal government, leading to a lot of other problems. Apart from these issues, Ruth also has to contend with her own tendency to high on her own stash, while also dealing with her son and her employees who are more or less constantly high while on duty.

Being a sort of a stoner comedy, ‘Disjointed’ uses almost every trick in the book, so much so that at times the use of familiar stoner tropes feel annoying. Unsurprisingly, the strongest asset of this multi-camera comedy is its star actress, the amazing Kathy Bates, who brings in some wry humour to the otherwise slapstick stoner comedy. Another cast member worth mentioning is Tone Bell in the role of Carter. Like Bates, Bell’s performance as an Iraq War veteran suffering from PTSD is also commendable, as is his chemistry with Bates. Apart from these two, however, the rest of the cast members often miss the mark when it comes to performances.

Despite boasting a star cast member, ‘Disjointed’ fails to live up to its potential, perhaps owing to its overuse of familiar tropes and its excessive use of expletives. Unsurprisingly thus, the show did not find favour among television critics, who gave Season 1 an abysmal score of 22% on review aggregator website Rotten Tomatoes, with the critics consensus harshly reading, “Bland and uneven, ‘Disjointed’ does more smoke-blowing than joke-telling — though it’s further proof that Betsy Sodaro is a comedian to watch.”. Even among viewers, ‘Disjointed’ failed to make a good impression, and has a mediocre rating of 6.7/10 on IMDb, based on nearly 7,500 votes.

While Netflix has not always cancelled shows which perform poorly, it took the decision to pull the plug on ‘Disjointed’ on February 14, 2018, just a month after the second part of Season 1 hit viewers’ screens on January 12, 2018. The only hope for the show is if another network picks it up or if Netflix changes it mind.

While there are no new seasons of ‘Disjointed’ to look forward to, here is the trailer the second part for Season 1 to give you a glimpse into the show, what it’s all about, and what the second part of Season 1 has in store.