‘Dora and the Lost City of Gold’ Trailer Released 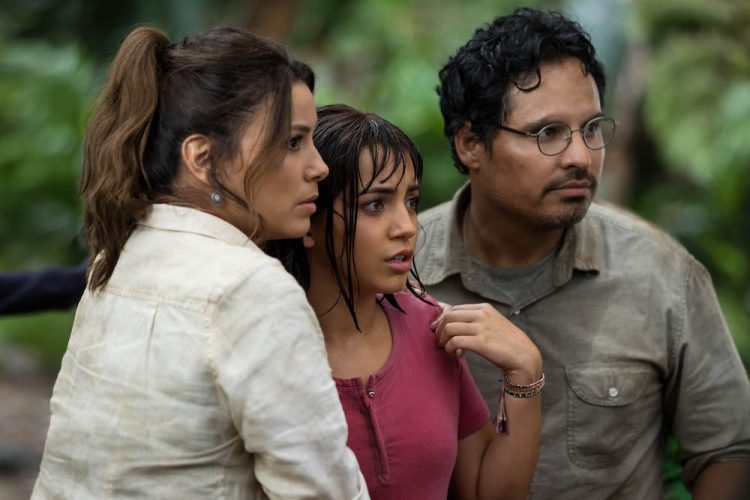 ‘Dora and the Lost City of Gold‘, the upcoming live action film from Paramount Pictures, has released its first trailer. The movie is based on the popular and long running Nickelodeon show ‘Dora the Explorer’. The film is being directed by James Bobin of ‘Alice Through the Looking Glass’ fame, while the script of the movie comes from Nicholas Stoller who is known for ‘Night School’.

Isabela Moner, who is best known for her role in ‘Transformers: The Last Knight’ plays the titular character of Dora in the movie. The rest of the cast is rounded up by impressive actors like Danny Trejo, of ‘Machete Kills’ fame, who voices Boots the monkey, and Benicio del Toro who voices Swiper the thieving fox. Michael Pena and Eva Longoria appear in the roles of Dora’s parents in the film.

The trailer shows a very different Dora than the one we are used to. For starters she is in high school and carries a knife. Moreover, her exploration is tied to the search of her parents in this case, which makes her more motivated. Over the course, the video shows how Dora deals with different puzzles and dangerous situations to come out on top, by using her skills and presence of mind to make the best use of resources that are available to her. As Dora embarks on a harrowing adventure to save her kidnapped parents and uncovering the mystery of the City of Gold of the Inca Civilization, fans will realize that this is not the childlike Dora they watched growing up. In fact, this movie, ‘Dora and the Lost City of Gold’ is much closer in its aesthetics to the ‘Lara Croft‘ movies or Brendan Fraser’s ‘Mummy‘ films. However, what struck us most about this trailer was how Pena managed to alleviate the humor of the film in whichever scenes he appeared in. Given a larger screen presence, he will be sure to have the audience in splits. Notably, Trejo who voices Boots could not be heard in the trailer at all. Furthermore, Swiper the Fox was missing from the trailer as well, but del Toro’s casting has been inspiring and we expect a stellar performance from both Trejo and del Toro, who are veterans, when the movie releases. Fans of the original ‘Dora the Explorer’ might note that Benny the Bull and Tico the Squirrel have been left out entirely, as has been the talking map, that were a staple of the show. Furthermore, Diego seems to be without his luscious hair in the movie.

Once again, we simply cannot get over how different the live-action film of Dora appears to be from the show. She carries a knife and does not seem like the interactive Dora who asks clues about things that are right in front of her. In fact, at the risk of sounding presumptuous, the upcoming ‘Dora and the Lost City of Gold’ seems to be in the same vain as the ‘Jumanji‘ reboot. If that is the case, we can expect the film to be a balance of adventure and comedy as Dora proves her worth to her parents, her companions and most importantly, to herself.

‘Dora and the Lost City of Gold’ is due to release on August 2, 2019. You can check out the trailer of the film below.