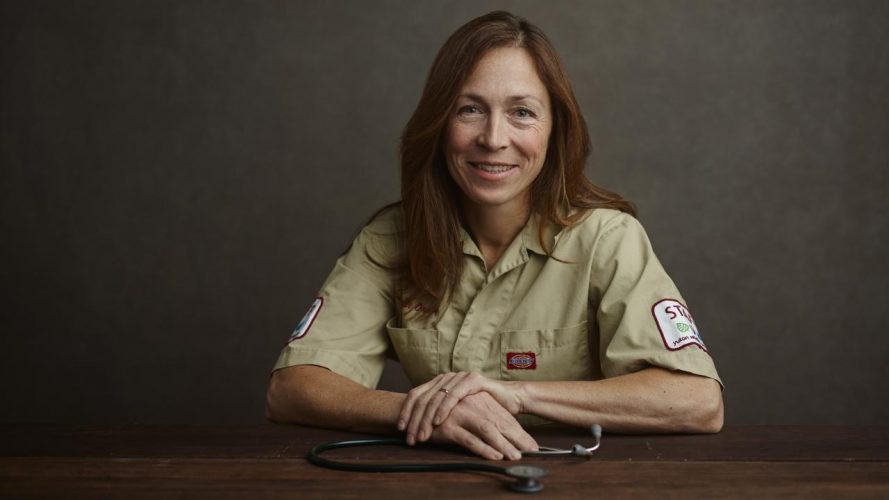 Dr Oakley Yukon Vet is a reality docudrama that follows Dr Michelle Oakley who is a veterinarian making house calls across Yukon as she covers thousands of square miles to help species of animals who are suffering from injuries and diseases of several kinds. On her journey, she comes to rescue of an angry musk ox, a caribou that had a tumour, a mama lynx exhibiting defensive behaviour and a grey owl that was carrying an amputated wing. Her teenage daughters join her as she leads the series with humour that cuts sharp. Dr Oakley skillfully juggles between her professional and personal life; being a veterinarian as well as a wife and mother to three daughters. She ventures into the isolated regions of the Yukon. Dr Oakley Yukon Vet is produced for the National Geographic Channel by Lucky Dog Films and first premiered on April 12, 2014.

Dr Oakley Yukon Vet Cast: Who is in it?

At the heart of the show is none other than the Yukon Vet, Dr Michelle Oakley, the only vet for miles in the Yukon Territory tending to all species in Northern Canada. She is an Indiana-native who has an undergraduate degree in Zoology from studying at the University of Michigan. She first toured to the Yukon territory while she was in college and was assigned the role of a field assistant to analyze the arctic ground for squirrels for her ecology research. She met her husband while on this trip, Shane Oakley who was a wildland fire-fighter who teased her as “squirrel girl.” She married Shane and attended the Atlantic Veterinary College where she graduated from in 2000, having earned a doctorate in veterinary medicine. She began working as a wildlife veterinarian & regional biologist for Yukon’s Fish & Wildlife Department and continued for nine years. She gave birth to Sierra, Maya, and Willow, her three daughters who are often seen with her while she is making her rounds.

Dr Oakley Yukon Vet Plot: What is it about?

Dr Michelle Oakley’s journey saving helping animals in need are delivered to the world through the series. Her days begin and are to pass according to a schedule she has set for herself as a noble attempt at maintaining organisation in her life. Despite that, Oakley barely follows it for the obvious reason that she is the only vet for several hundred miles in Yukon and is bogged with house calls that she can’t avoid.

“It’s a roller coaster every day,” says Dr Oakley, who, in her experience, has found the most mundane patients like that of a pregnant four-pound Yorkie to be a challenge. “You have to watch and see what happens,” she said.

She recalls a fateful morning of a snowstorm when a dog went into labour and had to be rushed to an animal hospital. In season 6, she released a herd of bison which she said was the highlight of the season. It is not every day that you get the rare gift to be able to an animal to its natural habitat. Before the release was to happen, she said, “They’re breeding the animals for release, to start a new wild herd,” she explains. “So we got to go out there, work with them, do the health checks, do the quarantine, get them ready for shipment, and they’re going to be starting a new herd of wild bison in Siberia.”

Through the TV series, Oakley has been able to access small communities which she would not have been able to serve otherwise. One of these remote communities was Yakutat which they visited in season 6 where Oakley had organised a multi-day clinic. “We had a guy show up with a llama in the back of his van. He opened the doors, dogs came out, and there was a llama looking at me!” The community was apparently so remote and isolated from the rest of the world that various modes of transportation were used in getting to various places including a helicopter, horse, tractor, jeep, dogsled, snowmobile, boats, Jet Ski, etc

She expressed her passionate sentiments and the joy that comes with helping animals in need, “I mean, that’s what it’s all about, right?!? I love working with pets, that’s so important, but when I’m doing the wildlife work — especially on animals that are injured, and you’re trying to get them back out to the wild — when you let them go, there’s no feeling like it. It’s like you’re righting some wrong. That you’re making up for so many things that we’ve done wrong, but this, we’re doing right.”

She has also visited the Aleutian Islands where she came to the aid of about 3,000 cattle. From ear-tagging the cattle to scrutinizing over a thousand female cattle to determine whether they were pregnant, it was a challenging adventure for her. Here she made use of improvised gloves. “I put on a glove, then a bread bag, then duct-taped my arm into my rain jacket. It was horrible”, she explained.

Visit the National Geographic to watch clips from season 6.